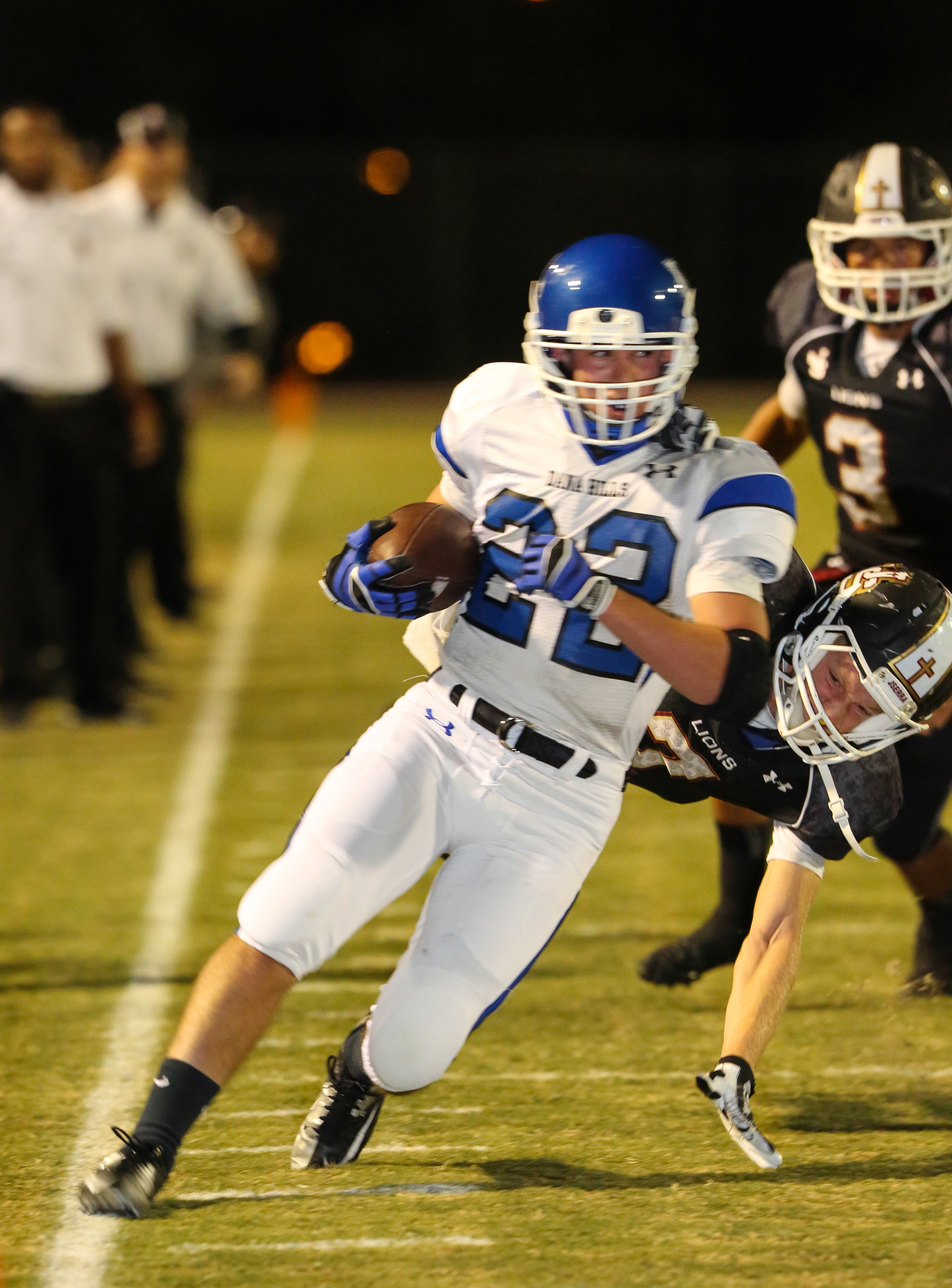 Big Plays Provide Power for JSerra in Win Over Dolphins

The JSerra football team may not have had possession for very long against Dana Hills but when they did, they made it count.

In a nonleague game filled with fumbles and penalties, the Lions were able to produce enough big plays to come away with a 28-12 victory on September 27 at Saddleback College.

On JSerra’s (4-0) first play from scrimmage, senior quarterback Nick Robinson connected with senior receiver Dante Pettis for an 80-yard touchdown pass, igniting the large homecoming crowd in attendance. It took 14 seconds for the Lions to get on the board.

The Dolphins (1-4) would answer with a drive that ate up five minutes of the clock, but not without a little help. After the Dolphins were forced to punt, JSerra fumbled the return and Dana Hills recovered, giving them prime field position. Facing a fourth-and-one during the ensuing drive at the Lions five-yard line, Dana Hills quarterback Mac Vail dove ahead and got the yardage the team needed.

Senior running back Justin Scott would finish it off with a four-yard touchdown run. A blocked point after kept the Lions up 7-6.

The Lions would fumble again four minutes later, but the Dolphins could not capitalize.

After both teams were hindered by multiple penalties to close out the half, bringing the game speed down to a crawl, JSerra junior running back Casey Eugenio broke for a 52-yard touchdown run to start the third quarter that saw him bob, weave and avoid his way to the end zone.

The Lions lead never came into doubt from then on, despite the Dolphins having junior running back Brian Scott back out on the field for the first time in four games.

Junior defensive end Mitchell Deamon returned a Dolphins fumble 42 yards for a score and Robinson would toss a 25-yard touchdown pass to Ricky Zak to close out the scoring for JSerra.

The Lions will travel to play Trabuco Hills on October 4. Dana Hills will host Irvine the same day.

“We did enough to win the game as far as points are concerned. We hung in there defensively enough to keep them from winning the game but we have to improve between now and next week if we’re going to beat Trabuco Hills,” JSerra head coach Jim Hartigan said. “A week ago we had a decent amount of penalties too so we have to clean that up.”

The first came in the form of a 16-2 win over Mission Viejo on September 26. The Dolphins (5-2, 3-0 league) singles players of Gressa Folley, A.J. Gomer and Katie Olson all went undefeated in their matches while the doubles duo of Jacklyn Melkonian and Kayla Lee swept their three matches.

The Dolphins singles players would continue their dominant stretch by winning all of their matches in a 13-5 win over El Toro on October 1.

The Dolphins will travel to play San Clemente on October 8.

A first-place finish in pool play wasn’t enough to propel the Dana Hills girls volleyball team to the lofty podium at the 2013 Durango Fall Classic last weekend, as the Dolphins lost to Archbishop Mitty in the qualifying stages of the tournament.

The Dolphins would go on to place 10th in the tournament that featured some elite competition. The Dolphins went 5-2 overall and defeated familiar teams like Orange Lutheran and Redondo Union.

The Dolphins returned home for a final preseason tune-up game against Laguna Beach, which they won 3-0 on September 26. They were set to open South Coast League play against Trabuco Hills on October 3. Results were not available at press time.

The Dana Hills boys water polo team is in the midst of a three-game losing skid and had an October 3 game set for Laguna Beach. Results were not available at press time.

The Dolphins (7-5, 1-0) offense that had been clicking earlier in the preseason was slowed during the losing stretch, averaging seven goals per contest. In their nine previous matches, before a September 27 loss to Corona del Mar, the Dolphins managed to average double digits in goals. It could be the level of competition the Dolphins have been playing to in those three games. Corona del Mar and Loyola are both ranked inside the CIF-SS Division 1 top-10 and Agoura is ranked No. 1 in Division 2. The Dolphins are currently ranked No. 8 in Division 1.