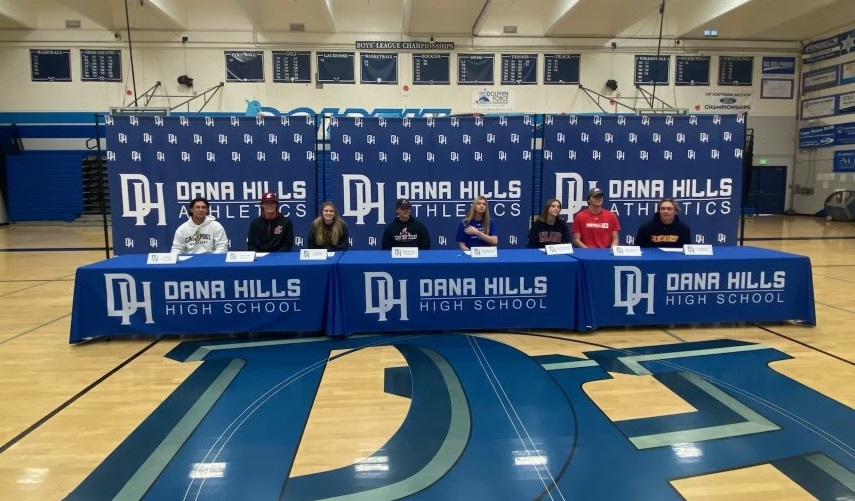 The Allemann family also doubled up on Signing Day, as Caroline Allemann signed with the University of Redlands to play tennis.

Signing Day continued to be a family affair with Dana Hills. In addition to the Faris family and Allemann family, the Hoff family also earned a signee, as Tatum Hoff, daughter of girls volleyball coach Tom Hoff, signed with Long Beach State, her father’s alma mater, to play volleyball.

Dana Hills softball also had a signee, with Alexa Pfutzenreuter signing with Westcliff University in Irvine.

Dana Hills boys basketball closed its regular season on Thursday, Feb. 3, at San Juan Hills, but results were not available at press time. The Dolphins were 15-8 overall (1-4 in the Sea View League) and ranked No. 3 in CIF-SS Division 3A. Dana Hills will apply for an at-large playoff berth. Playoff brackets will be announced on Tuesday, Feb. 8.

Dana Hills girls basketball finished winless in the South Coast League. The Dolphins are 12-14 (0-8 in league) and ranked No. 12 in CIF-SS Division 4A. Dana Hills will have to apply for an at-large playoff berth and hope its ranking throughout the nonleague season bolstered its resume. Girls’ playoff brackets will also be announced on Tuesday.