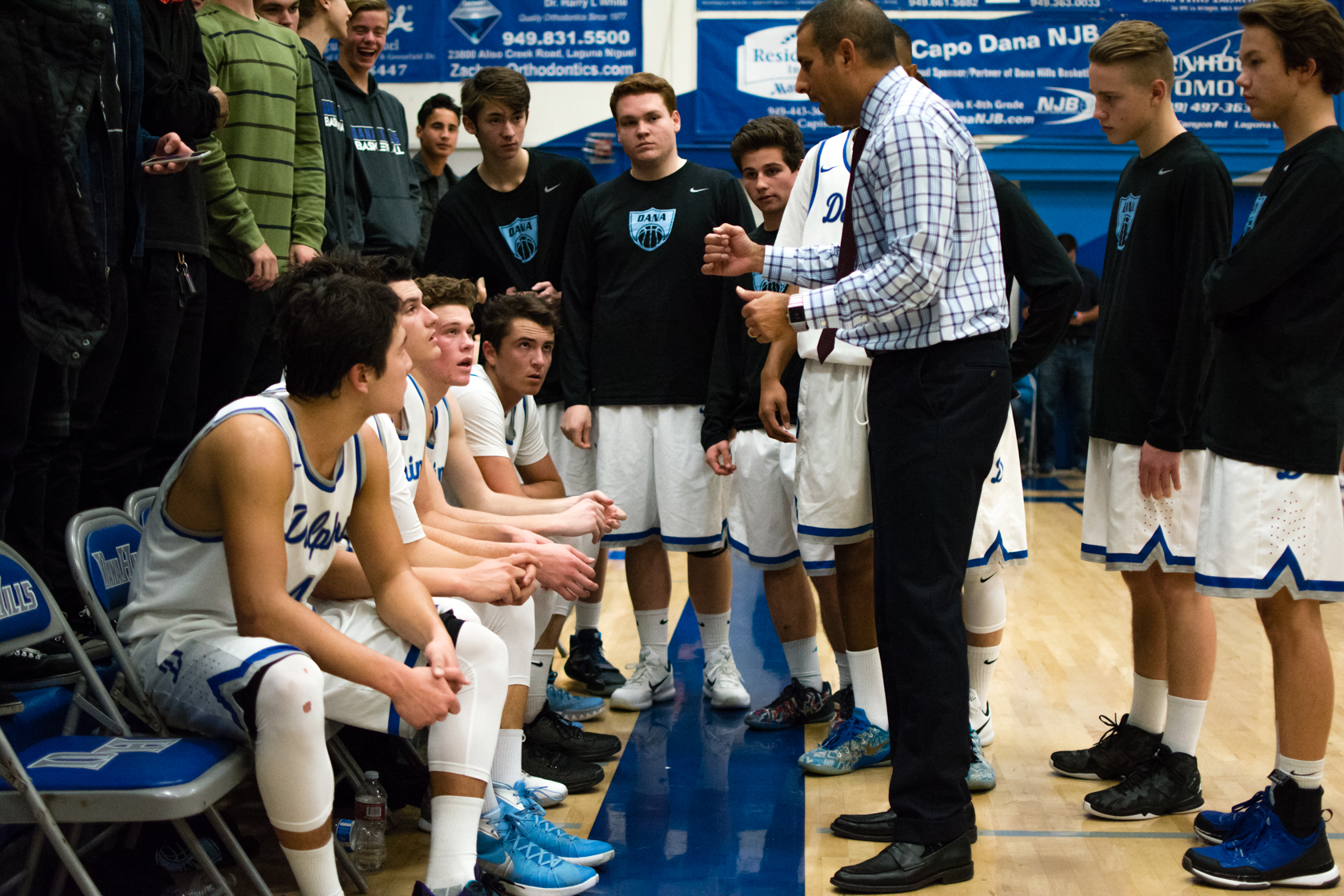 By Steve Breazeale and Michael Matossian

The Dana Hills High School boys basketball team looked to take the bull by the horns in a South Coast League matchup against rival El Toro on Jan. 13. In the end, it was the Chargers who took control, pushing past the Dolphins 55-51 in a tightly contested matchup.

El Toro jumped on Dana Hills early and went on a 12-5 scoring run to open up the first quarter. The Chargers kept up the pressure in the second quarter, fueled by an 11-0 run that extended the home team’s lead to 19 points with four minutes to go before halftime.

A turning point in the game came in those final two minutes before the break. Dana Hills sophomore guard Zach Stirtz made two quick baskets to break El Toro’s momentum, and Dana Hills finished the half on a 9-0 run to cut the deficit to 10.

The Dolphins carried the energy with them into the third quarter. Dolphins senior Garrett Arico helped cut the El Toro lead to five in the quarter. Arico finished with a game-high 19 points and four rebounds.

Facing an eight-point deficit to start the fourth quarter, Dana Hills narrowed the gap to four thanks to Jacob Phillps’ shooting ability. Phillips poured in 13 points and six rebounds on the night.

With its lead cut down to four, El Toro was able to regroup and keep the Dolphins at bay. El Toro guard Noah Aguilar came off the bench late in the fourth, hit a clutch jumper and a pair of free throws to push the lead back to seven with 25 seconds remaining.

The Dolphins have now lost back-to-back closely contested league games. Despite taking a late lead in the third quarter against rival San Clemente on Jan. 8, Dana Hills could not hold on as the Tritons mounted a comeback in a 56-45 victory.

“To beat the really good teams, we have to play four quarters and we haven’t. We had a chance (against El Toro), we just didn’t finish it,” Dana Hills head coach Tom Desiano said. “At the same time I think it gave our kids a little bit of confidence knowing we can play with the best of the league.”

After a blistering 7-1-1 start to its season, Dana Hills (7-4-1, 0-2 league) has now lost three straight. The Dolphins played Tesoro in the Mustang Cup Championship game on Dec. 30 and lost 2-1. A 2-1 loss to Aliso Niguel to open league play on Jan. 8 followed.

Dana Hills will travel to play Trabuco Hills in a league match on Jan. 15. The Mustangs have had mixed results this season and own a 4-5-2 overall record. –Steve Breazeale

Girls Soccer Draws Even With Diablos

For the eighth time this season, the Dana Hills girls soccer team found itself deadlocked with an opponent at the end of regulation. On Jan. 12, the Dolphins earned a 0-0 tie with Mission Viejo.

The Dolphins picked up a crucial win on Jan. 7, when Dana Hills scored two second-half goals in a 2-1 South Coast League-opening victory over Capistrano Valley.

A week removed from its last South Coast League contest, the Dana Hills girls water polo team was set to resume league competition against Tesoro on Jan. 14. Results were not available at press time.

The Dolphins (8-7, 1-0) went into the matchup with the Titans in the midst of a two-game losing skid. Dana Hills lost to Santa Monica 9-1 and Laguna Hills 9-6 on Jan. 9 in nonleague matches.

In a dominant defensive performance, the Dana Hills girls basketball team opened up Sea View League play with a 48-24 win over Mission Viejo on Jan. 7.

The Dolphins (11-4, 1-0) defense limited the Diablos to just 12 points in each half, while the offense was powered by sophomore Peyton Romo’s game-high 21-point performance. Romo made three 3-pointers, pulled in five rebounds and recorded three steals in the win.

Maddy Bloom and Olivia Chambers each scored nine points for the Dolphins.

Dana Hills was scheduled to play a Sea View League game against Trabuco Hills on Jan. 14. Results were not available at press time. –SB