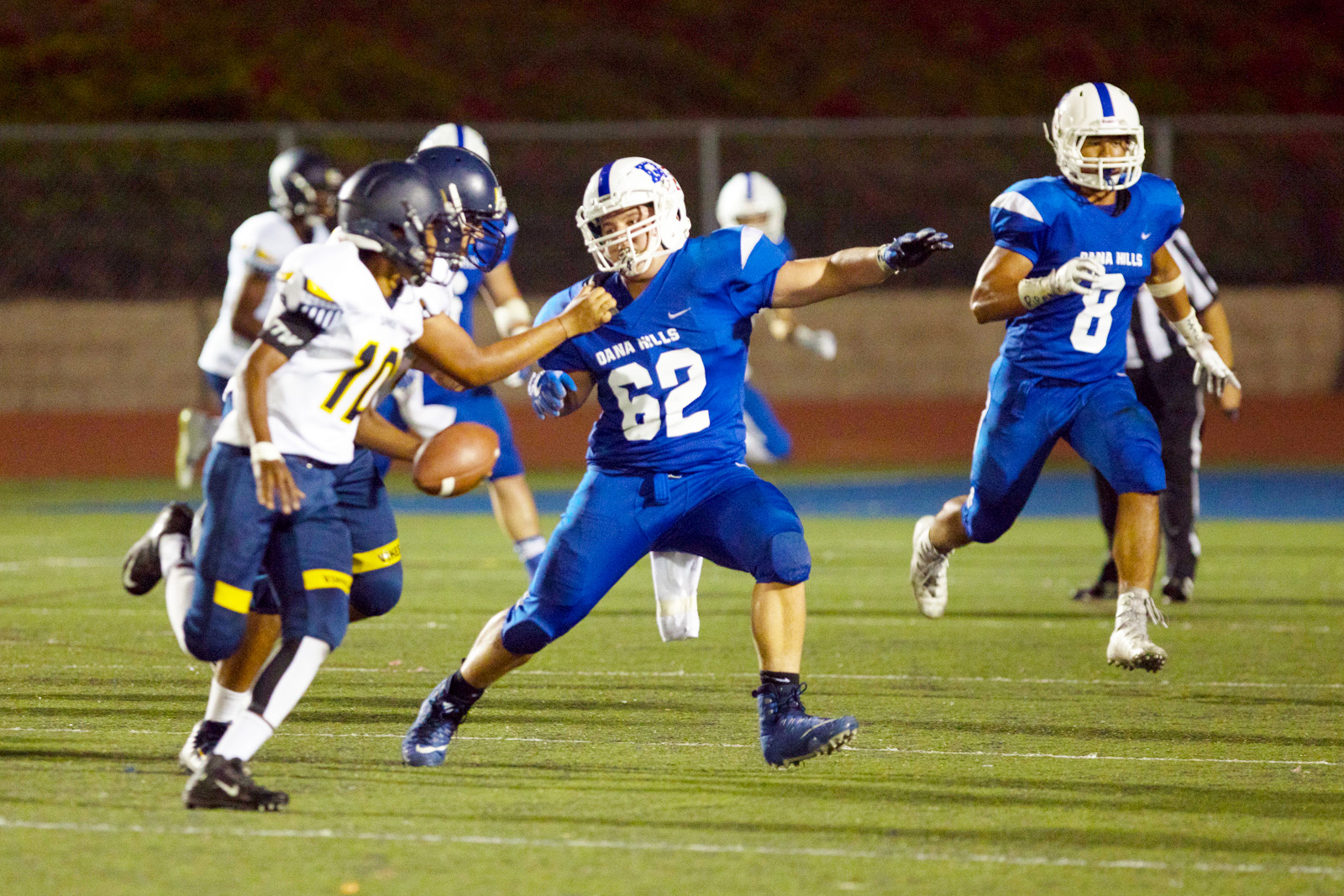 In its best showing of the season, the Dana Hills football team picked up its elusive first win against Santa Monica, 26-12, on Sept. 15.

In the process, the Dolphins (1-3) snapped an eight-game losing streak that dated back to last year in the process. It had been almost a full calendar year since Dana Hills left the field with a win.

The Dana Hills defense had been porous heading into the matchup with Santa Monica, allowing an average of 40 points per game through three contests. But the defense stood tall against the Vikings (0-4), limiting them to just 12 points.

Linebacker Matthew Lua Mu Poching had six tackles, one sack and a fumble recovery in the win. Senior defensive tackle Tommy Bortnick had seven tackles, including two for a loss, and a sack. Kuba Rekawek had five tackles and two sacks.

“Defensively, our effort was out of this world. I was blown away at how great we played on defense,” Dolphins coach Phil Skinner said. “We had them pinned down with basically everything they tried to do.”

The win came on homecoming night in front of a large and raucous crowd.

The Dolphins will travel to play Los Amigos (1-2) in a nonleague game on Friday, Sept. 22. The Dolphins defeated Los Amigos for their only win of the season in 2016.

Los Amigos has struggled to score points this season. They have mustered just nine total points in three games. –Alan Gibby contributed to this report

The Dana Hills cross country team made its annual trip to paradise last week and came away with a trophy for their efforts. The boys team had a spectacular performance running in the Kaiser Invitational in Honolulu, Hawaii, turning in a first-place effort.

The Dolphins had five of its runners finish in the top-10. In fact, all five finished right behind each other, taking third- to seventh-place. Sagan Svoboda took third overall, narrowly edging teammate Simon Fuller.

The Dolphins were without their top runner, however. Senior Jack Landgraf stayed behind on the mainland to compete in the Mt. Carmel Invitational in San Diego on Sept. 16.

Landgraf placed eighth overall at the high-profile event, finishing in a time of 15:40.

Dana Hills, ranked 15th in the latest CIF-SS Division 1 and 2 rankings, squared off against eighth-ranked Santa Margarita on Sept. 13 and lost, 9-8.

Dana Hills was scheduled to play reigning league champion El Toro on Sept. 20. Results were not available at press time.

After toppling Mission Viejo 3-1 in its Sea View League opener on Sept. 14, the Dana Hills girls volleyball team was slated to play several nonleague games against tough opponents in the coming days.

The stretch kicked off against Trabuco Hills on Sept. 21. Results were not available at press time. An appearance at the La Jolla Tournament from Friday, Sept. 22 to Saturday, Sept. 23, is on tap before they return to league play against Laguna Hills on Tuesday, Sept. 26.

The Dana Hills girls tennis team improved its record to 7-1 on the season following wins over Aliso Niguel, Murrieta Valley and Los Alamitos.

The Dolphins’ 10-8 victory over the Wolverines, a South Coast League rival, was the closest match of the bunch. The Dolphins doubles rotation provided the power, winning eight of a possible nine points to pick up the win.