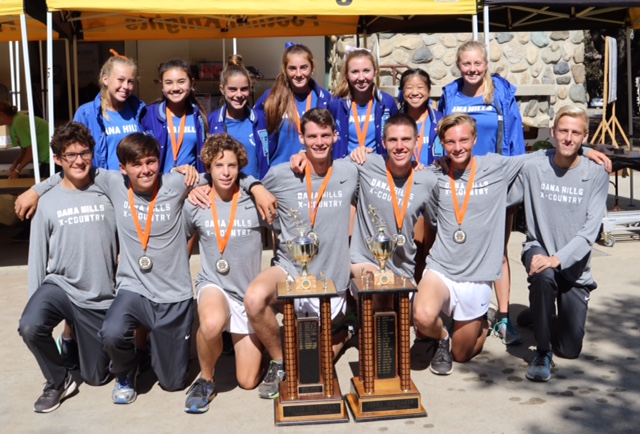 The Dana Hills boys and girls cross country teams proved they are the squads to beat in the area yet again with a dominating performance at the Orange County Championships at Irvine Regional Park on Oct. 15.

The Dolphins pulled off a clean sweep on the podium, as both the boys and girls team placed first at the high-profile midseason meet.

Junior Jack Landgraf won the Orange County individual title in the varsity sweeps race with a first-place time of 14:53.3. Landgraf finished nearly 12 seconds ahead of the second-place finisher.

The girls squad, much like the boys team, relied on its formidable depth to claim the championship.

The Dana Hills boys and girls teams have now recorded first-place finishes at Irvine Regional Park in two different meets this season. Both teams won the South Coast League preview meet at the course on Oct. 5.

Dana Hills will compete at the Riverside Invitational, site of the upcoming CIF State Championships, on Oct. 22.—Steve Breazeale

The Dana Hills football team came out strong against Laguna Hills in its Sea View League opener on Oct. 14, but lost steam almost as fast as they gained it in an eventual 46-27 loss.

On the Dolphins’ (1-6, 0-1 league) opening drive, junior quarterback Corey Cisowski connected with senior Ryder Lynch for a 63-yard touchdown pass for a 7-0 lead two minutes into the game, which shocked the Laguna Hills home crowd. But the lead would not last long, as the Dolphins would not find the end zone again until the third quarter.

Laguna Hills (4-3, 1-1) responded later in the first quarter with the help from junior quarterback Ross Leigber. Leigber found his favorite target, receiver Logan Montgomery, time and time again throughout the quarter, and the game. Laguna Hills held a 17-7 lead heading into halftime.

Montgomery would lead all receivers with 124 yards, and Leigber passed for 153 yards.

Laguna Hills increased its lead to 31-7 in the third quarter, which prompted the Dolphins to replace Cisowski with backup Brandon Oswald. Oswald would engineer three Dolphin scoring drives, combing to run and throw for 198 total yards. Oswald scored on a short keeper with one minute left in regulation to close out the scoring.

“Oswald stepped up tonight. He proved that he is versatile and could step into many positions when needed,” Dana Hills coach Phil Skinner said.

Dana Hills will host El Toro (2-6, 1-1) in a league game on Oct. 21. The Chargers are coming off a 41-7 blowout loss to first-place Capistrano Valley last week. –Victor Carno

Facing a tough battle down the stretch, the Dana Hills girls golf team strung together three consecutive South Coast League match victories to earn a share of the league title.

The Dolphins (16-7, 6-2), needed to win out on its schedule in order to share the league title with San Clemente and Trabuco Hills, and they did. Dana Hills defeated Trabuco Hills and Tesoro twice down the stretch to finish in the three-way tie.

As of Oct. 20, the Dolphins were competing in the South Coast League finals tournament, and had a strong showing on day one of the two-day event. Senior Joan Soewondo carded a first-round score of 69 (-3) at San Juan Hills Golf Club to take the early lead. Soewondo held a seven-shot lead over Trabuco Hills’ Hailey Borja after the first round. Dana Hills’ Averee Dovsek’s 82 (+10) put her in a tie for fourth place, and Lauren Wahlstrom and Isley Grguric both shot 86 (+14) to earn a share of eighth place. The second day of league finals was scheduled for Oct. 20. Results were not available at press time.—SB