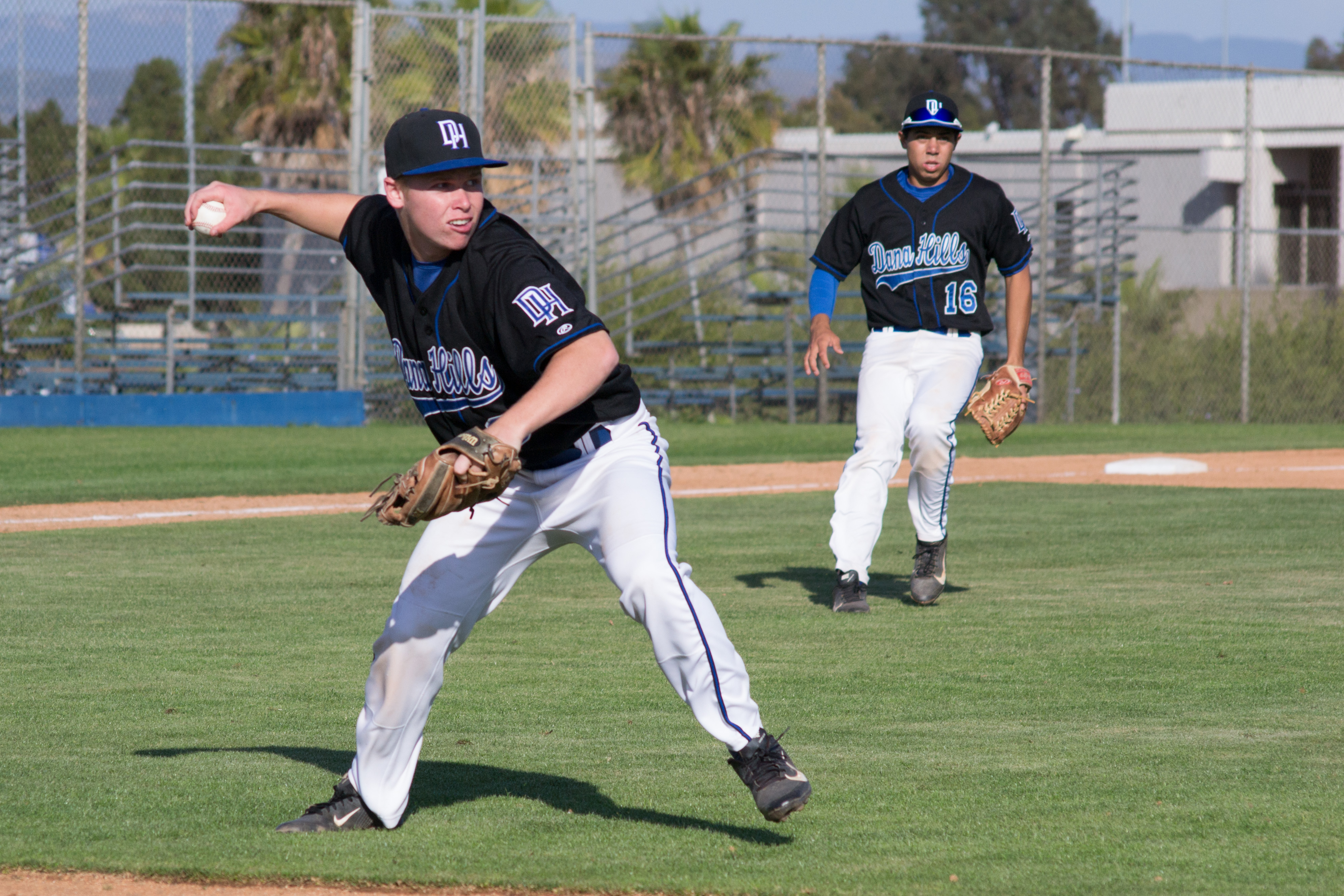 For in-game updates, news for all the Dana Hills High School sports teams, follow us on Twitter @SouthOCsports.

The Dana Hills baseball team came from behind for a seventh-inning walk-off 3-2 win against Aliso Niguel on April 15, which was their second final-inning victory in as many games.

On April 8, the Dolphins got a game winning hit from Thomas Waldenberger that defeated San Clemente. Against the Wolverines, it was junior Zach Wolf who delivered the winning RBI single with two outs and a runner on second base.

It was the second time this season Dana Hills (15-4, 5-0) was able to win a game when the Wolverines started standout pitcher Kyle Molnar, a UCLA commit.

Aliso Niguel took the lead in the top of the sixth inning on a sacrifice fly by Nick Wagaman, scoring Domenic Colacchio. Dolphins senior Louis Raymond tied the game in the bottom half of the inning with an RBI double.

With two outs in the bottom of the seventh inning, Dana Hills’ Luke Williams doubled off the left field wall and Wolf would single him in for the win.

For two games, it looked like the San Clemente boys volleyball team was going to fall victim to spring break rust. After not playing a match for 12 days, the Tritons quickly found themselves in a 0-2 hole on the road against rival Dana Hills on April 15, the Dolphins eyeing a possible three-game sweep.

The Dana Hills (12-6, 3-1 league) serving game played a large part in their first and second-game wins. Junior Teddy Fitzgerald and sophomore Jake Freeman had four aces between them in the opening two games and held serve with the score tied 24-24 in the second, allowing the Dolphins to earn a 27-25 win.

San Clemente (14-4, 3-0 league) kept the match alive in the third set, going on a late 6-0 run to pad their lead to 23-13. Junior middle blocker Matt August recorded a solo block and assisted on two more during the run.

“It took a while for us to get our rhythm. We made a lot of unforced errors those first couple of games,” San Clemente head coach Ken Goldstone said. “I thought we kind of hung in there and played hard. I told them if we can just get a game and get some rhythm, we’ll be OK.”

In the fourth, the Tritons benefitted from a Dolphins unforced error with the match on the line. Dana Hills held a 24-23 lead and could have put the match away, but instead an error was recorded at the net and the Tritons had a second chance. Another block from August and a Peter van Liefde kill made it 27-25, forcing the decisive fifth set.

The error at the net by the Dolphins was the turning point of the match, and was one of many mistakes Dana Hills head coach Oz Simmons saw his team make late in the game.

“As the match progressed, we started making more and more unforced errors. Especially in the fourth and fifth games, when it was close. We gave them some critical points,” Simmons said.

Dana Hills led 10-7 in the fifth set and the Tritons tied things up following two Dolphins errors and an Aaron Strange block. Following an ace from junior Marcus McGuire that barely landed in play on the back line, junior middle blocker Brandon Hopper recorded a block and secured the match for the Tritons.

The Dolphins were set to play on the road against Tesoro on April 17. Results were not available at press time.

Junior Madison Killebrew and senior Danielle Ingraham stepped to the plate a total of eight times and came away with four combined home runs in the Dana Hills softball team’s 7-5 South Coast League win over San Clemente on April 15.

Killebrew and Ingraham each hit two home runs, which helped build an early 6-1 lead for the Dolphins (12-4, 1-1). The comfortable lead shrunk in the bottom of the sixth inning, when San Clemente scored four runs to make it 7-5.

Dolphins senior pitcher Lindsey Cassidy threw her seventh complete game of the season in the win.

Dana Hills was set to play Capistrano Valley on April 17. Results were not available at press time.