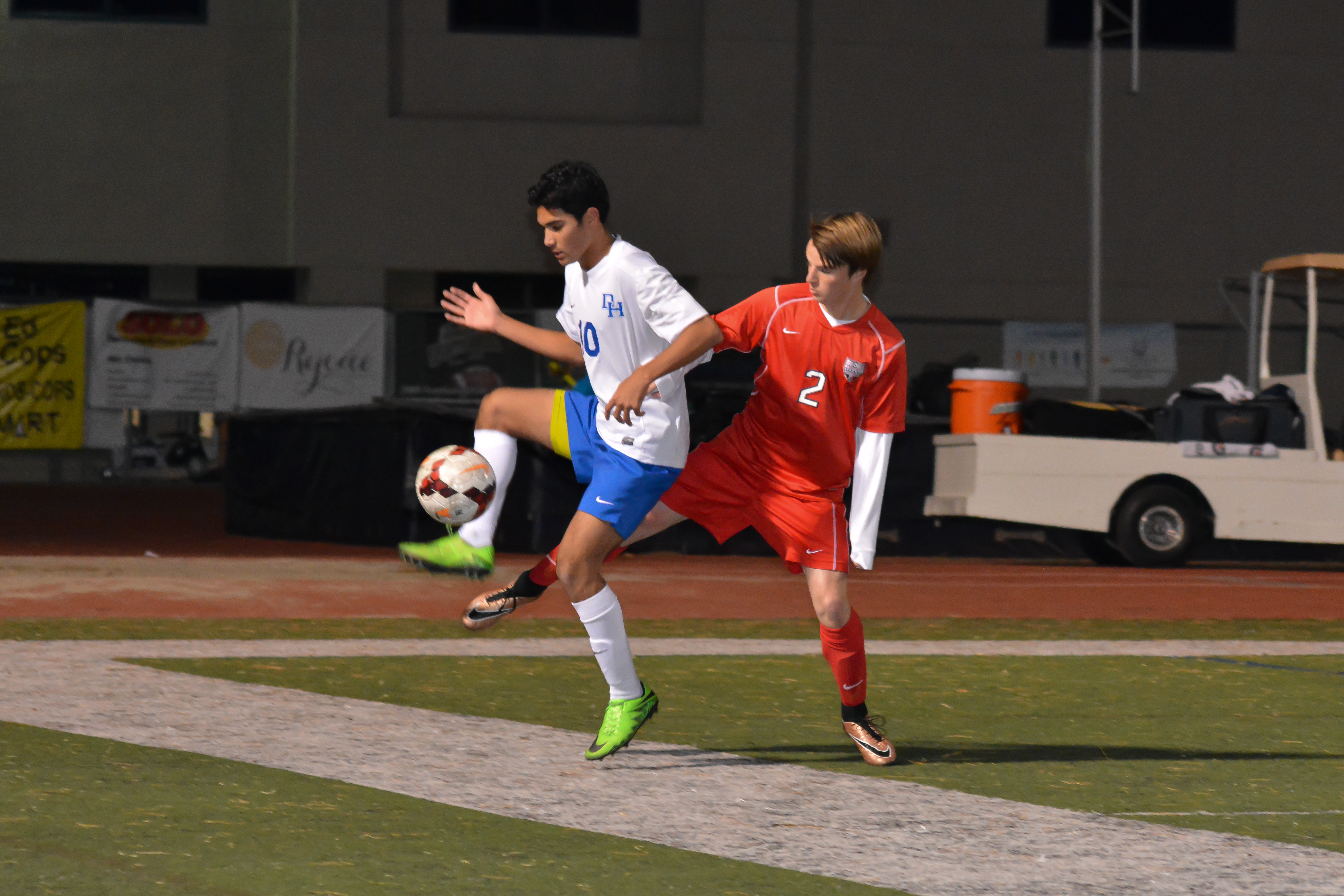 The Dana Hills boys soccer team’s season-best seven-match win streak came to an end in dramatic fashion on Dec. 30, as the Dolphins lost to Tesoro 2-1 in the championship match of the Mustang Cup Tournament.

Dana Hills (7-2-1) barnstormed its way to the tournament finals, outscoring Foothill, Segerstrom and Capistrano Valley by a combined 7-0 margin. After pushing past Foothill and Segerstrom 2-0 and 1-0, respectively, in the opening rounds, the Dolphins crushed the Cougars 4-0 in the semifinals.

But two first-half goals by Tesoro proved to be too much for the Dolphins to overcome in the championship. Dana Hills tacked on one goal in the second half but could not find an equalizer.

The Dolphins will begin Sea View League play with a road match against Aliso Niguel on Jan. 8. The Dolphins will have to navigate several talented teams if they hope to make a run at the league title. Dana Hills will have to play Tesoro, the 10th-ranked team in CIF-SS Division 2, and fifth-ranked Laguna Hills twice. Following the Dolphins’ league-opening match with the Wolverines, they will host Tesoro in a re-match of the Mustang Cup finals on Jan. 13.

The Dana Hills boys basketball team picked up some momentum just before the New Year, notching back-to-back wins over Bolsa Grande and Estancia on Dec. 28 and Dec. 29, respectively, as part of the Estancia Coast Classic.

The Dolphins (7-9) edged out Bolsa Grande 56-52 and breezed past tournament host Estancia 61-43 to close out their tournament run.

Dana Hills is led by senior guard Parker Romo, who has been a sharpshooter from the outside this season. Romo has made 53 3-pointers in 14 games, which is the fourth-highest mark in Orange County. Romo’s 53 made 3-pointers is only three off the county leader AJ Perry of Canyon, despite Romo having played in four fewer games.

San Clemente will enter the game with a significant height advantage, especially in its starting rotation. San Clemente senior forward Cole Fotheringham and senior Dillon Waikle stand at 6-foot-5 and 6-foot-11, respectively. Both Fotheringham and Waikle are among the more productive Tritons on the roster this season. The Dolphins have only one player, senior Joey Rancour, who stands above 6-foot-3.

The Dana Hills girls soccer team has not felt the sting of defeat since Dec. 17, when the Dolphins fell to El Toro 2-0 in a nonleague match. In the five matches that followed, Dana Hills has yet to lose, going 1-0-4 over the stretch.

Dana Hills (3-2-7) has seven draws on its resume this season, and has finished in a deadlock in three straight games. At the North Orange County Classic tournament from Dec. 28-29, Dana Hills defeated Ayala 2-1, and drew even with Roosevelt, Vista Murrieta and Corona del Mar, respectively.

Dana Hills was set to host Capistrano Valley (5-7-2) in both teams’ South Coast League opener on Jan. 7. Results were not available at press time. The Dolphins will travel to play Mission Viejo in a league match on Jan. 12.

A South Coast League matchup between the Dana Hills and Aliso Niguel girls water polo teams was scheduled for Jan. 7. Results were not available at press time.

Dana Hills (4-5) entered the game following a nonleague loss to Schurr on Dec. 19. Schurr outscored the Dolphins 7-2 in the second half en route to a 12-7 victory. Sydney Baba scored four goals and Alex Peros scored three to lead Dana Hills.

The Dolphins will travel to play Tesoro in a league match on Jan. 14.

Wrestling Readies for Match With Mustangs

The Dolphins are currently 1-1 in league and will host Trabuco Hills on Jan. 12.