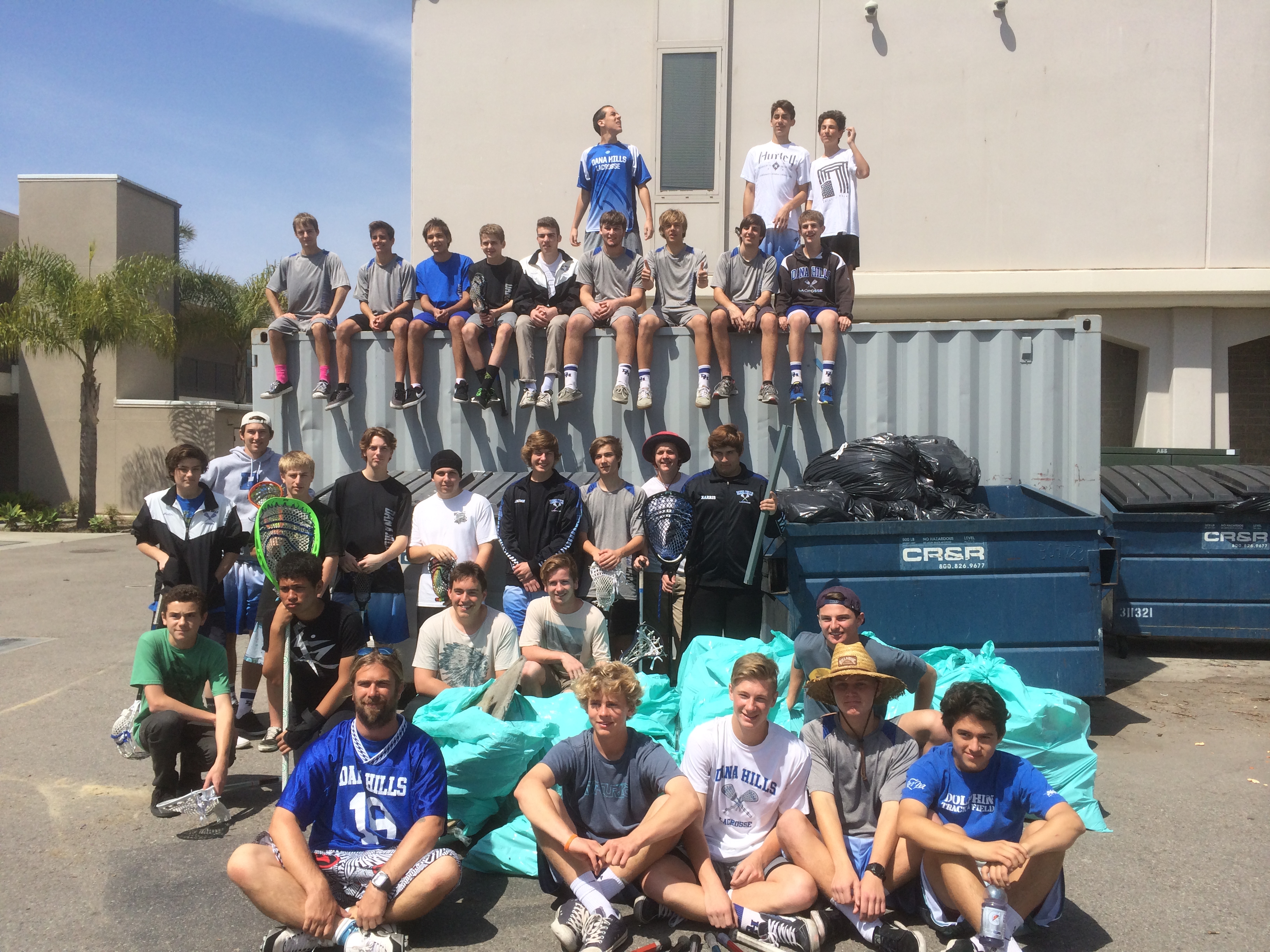 For in-game updates, news and more for all the Dana Hills High School sports teams, follow us on Twitter @SouthOCsports.

The Dana Hills boys lacrosse team did not celebrate a 2-2 start to their Sea View League schedule by any conventional means. Instead, after defeating Laguna Hills 11-9 on the road on March 27, the Dolphins spent the following Saturday cleaning up their facilities.

The Dolphins held their first-ever Clean-Up-A-Thon on campus March 29, collecting nearly $3,000 in the process. The Dolphins went to local businesses, friends and families to ask for donations and in return, they cleaned up their school. The Dolphins collected more than 35 bags of trash and used the collected money to buy equipment and uniforms.

Dana Hills (3-7, 2-2 league) will return from spring break to play Capistrano Valley on April 17. The Dolphins were narrowly edged by the Cougars in a 6-5 loss on March 25.

Last year, the San Clemente and Dana Hills baseball teams played three games that were decided by two runs or fewer. San Clemente won all three contests and two of them by only one run. So when the two rivals squared off for the first time in Sea View League play at Dana Hills on April 8, it was no surprise the game came down to the wire.

With men on first and second base and no outs in the bottom of the seventh inning, the scored tied at 3-3, Dolphins junior Thomas Waldenberger hit an RBI single down the left field line that plated Shawn Kany and gave Dana Hills a walk-off 4-3 victory.

Junior catcher Luke Williams drew just the second walk allowed by Tritons starter Kolby Allard to lead off the bottom of the sixth inning. Dana Hills head coach Tom Faris wanted to send his speedy leadoff hitter and see if he could steal second, but instead trusted the bat of his first baseman, Jay Schuyler, who hit a two-run home run high up in the gusty air in left field two batters later to tie the game at 3-3.

“I was honestly trying to put one in play and get a base hit out of it. He left me a couple over the plate in the beginning of the at bat that I was kind of mad that I missed. I fouled them off. I just kept battling,” Schuyler said. “Eventually he left one out for me, I put it up in the wind and it went out.”

The Tritons took a 3-1 lead in the sixth inning on three consecutive singles by Trevor Beard, Tyler Ankrom and Will Tribucher and, once Schuyler tied things up, had a chance to take the lead again in the top of the seventh.

With the bases loaded and two outs, Tritons first baseman Trevor Beard hit a hard ground ball to the right side of the infield that head coach Dave Gellatly thought would go through. Kany, the second baseman, was able to field the ball and get the final out, setting the stage for the Dolphins seventh-inning rally.

“Baseball is a funny game sometimes. I felt like we played a good ballgame. Trevor hits that ball to the right side, I think it’s getting through, and it kind of takes a funny hop,” Gellatly said. “At that moment, it was like the baseball gods weren’t with us today. It was two evenly matched teams who got after it and Dana Hills executed when they had to.”