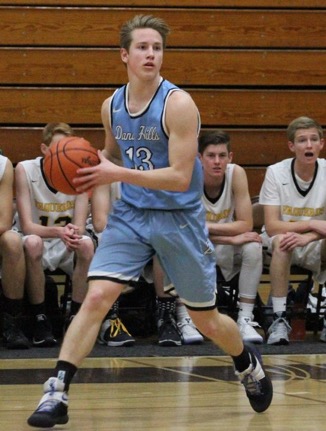 It was still anybody’s game at the midway point of a Sea View League clash between the Dana Hills and San Juan Hills boys basketball teams on Jan. 25. Both teams were even at the half, but the Stallions were able to inch away late as they pulled off a narrow 56-51 victory.

The Dolphins (8-12, 1-3 league) had three players score at least 10 points and were led by Devan Garland’s 15 points. Reed Romo and Zach Stirtz each had 11 points, but it was not enough to match the Stallions’ late charge.

Dana Hills will host first-place Mission Viejo (11-10, 3-1) on Jan. 27. In the two teams’ first meeting of the season, on Jan. 11, Mission Viejo narrowly emerged with a two-point victory.

Consecutive 2-0 shutout victories over Laguna Hills and Tesoro on Jan. 17 and Jan. 19, respectively, jumpstarted the Dana Hills girls soccer team’s march toward the end of the regular season.

Before defeating the Hawks, the Dolphins had not picked up a victory in six straight matches. The wins put them in the hunt for a playoff berth.

Against Tesoro, Isabel Barnett and Reed Morrison each scored a goal, and goalie Savannah Haag made 10 saves to ensure the shutout.

Dana Hills (6-3-6, 2-2) was scheduled to host San Clemente on Jan. 26. Results were not available at press time. The Dolphins and Tritons entered the game tied for second in the standings.

Trabuco Hills was able to stop the red-hot Dana Hills girls basketball team on Jan. 23 in a 36-32 Sea View League victory. The win ended a 12-game winning streak for Dana Hills, which dated back to Dec. 6.

The game went back-and-forth, and the lead never grew to more than three points. Trabuco Hills was able to edge the Dolphins in the third quarter and hold on for the win. Trabuco Hills’ Jordyn Carrido and Dana Hills’ Maicie Saia each scored 15 points to lead their respective teams.

In the first meeting between two longtime rivals in three seasons, the Dolphins (17-4, 3-1) defeated San Clemente 32-31 in a nonleague game on Jan. 21. Saia led the Dolphins with 14 points.

The Dolphins’ recent win streak vaulted them up the standings in the latest CIF-SS Division 2A coaches’ poll. Dana Hills is ranked eighth in the division.

The Dana Hills girls water polo team suffered a 16-3 loss to El Toro in a return to South Coast League competition on Jan. 23.

Dana Hills (14-11, 2-2) entered the game against the Chargers on the heels of a 2-3 effort at the America’s Finest City Tournament in Coronado. Dana Hills earned wins over Martin Luther King High School and Oaks Christian at the tournament.

Dana Hills was scheduled to host first-place San Clemente on Jan. 26. Results were not available at press time. San Clemente entered the game with an undefeated record in South Coast League play.

The Dana Hills boys soccer team had no answer for Laguna Hills’ Ryan Bishop in a Sea View League contest on Jan. 18. Bishop scored a hat trick and powered the Hawks to a 4-1 victory.