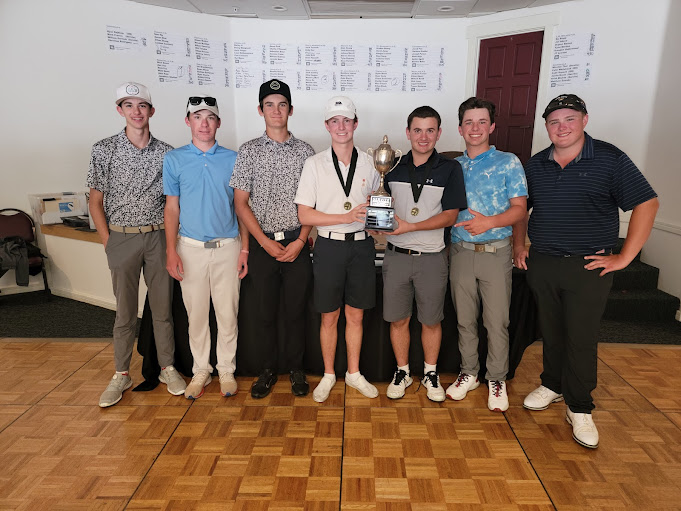 While the Dana Hills boys golf team’s eight-year reign atop the South Coast League came to an end last month, the Dolphins have stayed in top form to open the postseason.

Freshman Nick Davis, sophomore Nick Fry and junior Alex Pain each shot 1-under-par 71s to finish tied for 10th in the CIF-SS Individual Southern Regional on Monday, May 9, at Los Serranos Country Club in Chino Hills. Davis, Fry and Pain now advance to the CIF-SS Individual Championships on May 19 at River Ridge Golf Club in Oxnard.

Davis, Pain and Fry qualified for the CIF-SS individual postseason out of the South Coast League Finals on May 2-3 at Arroyo Trabuco. Davis extended his stellar freshman season by winning the South Coast League individual title with a 9-under-par, two-day total of 135 and being named league MVP. Pain finished fourth with an even-par 144, and Fry finished fifth with a 4-over 148.

Junior Cade Hansen also qualified for the CIF-SS individuals in seventh with a total of 150, and senior Jonathan Shelton won a playoff for eighth to claim the final qualifying spot.

As a team, Dana Hills finished 16-2 overall, with their only two losses coming to league champion Tesoro, which is the reigning CIF-SS Division 2 champion. The Dolphins play as a team in the CIF-SS Division 1 team championships on Monday, May 16, at Western Hills Country Club in Chino Hills.

If Dana Hills finishes in the top 10 at the Division 1 championship, the rest of the Dolphins will join Davis, Fry and Pain on May 19 at River Ridge Golf Club to compete as a team at the CIF-SS SCGA Regional Qualifier, which is held concurrently with the CIF-SS Individual Championships.

If the Dolphins finish in the team top four or Davis, Fry or Pain finishes in the top 28 individuals, they will move on to the CIF/SCGA Southern State Regional Championship on May 26 at Brookside Golf Course in Pasadena.

Saeedi, Gordon Round Out Swim Seasons in CIF-SS Consolation Finals

While Saeedi and Gordon did not advance to the finals at last week’s preliminaries, the CIF-SS structure includes consolation finals for the ninth through 16th places and opportunities to qualify for the state meet.

Saeedi came the closest to state qualification, as he hit the state consideration standard in the Division 1 boys 200-yard freestyle. However, there were more times ahead of Saeedi, and when it came time to draw the line for state qualifiers, Saeedi fell on the other side. Saeedi finished 12th in the 200-yard freestyle and 15th in the 100-yard backstroke.

Gordon finished 11th in the Division 2 girls 100-yard breaststroke and 14th in the 200-yard freestyle.

Dana Hills aquatics was still alive on Thursday afternoon, as senior Rhys Davies competed in the CIF State Diving Championships at Clovis West High School in Fresno, but results were not available at press time. Davies was the only Orange County boys diver to advance to state.