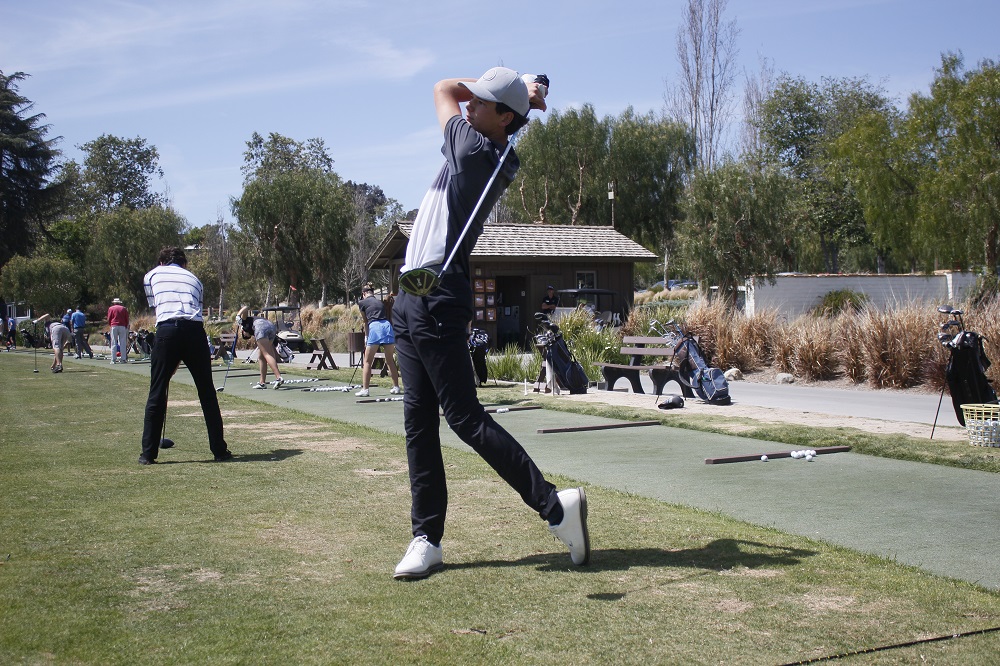 The Dolphins shot a combined 383 with their five scorers. University won the title at 374, and Foothill qualified for the CIF-SS championships in second at 375.

This marks the season’s end for Dana Hills, as no individuals qualified for further CIF-SS play.

In the CIF-SS Southern Individual Regional on May 6 at Skylinks Golf Course in Long Beach, Hill finished tied for 41st with a score of 77, three strokes behind the cut line.

The Dana Hills track and field team didn’t take home any gold at the CIF-SS Division 1 Finals on Saturday, May 11 at El Camino College in Torrance, but the Dolphins are still alive in six events in their quest to qualify for the State Championships.

Cole Stark and Carrick Denker qualified in the boys 1,600-meter, and Hailey Ray, Anisa Rind and Mia Lawrence qualified in the sprints and in the girls 4×400-meter relay team. The CIF-SS Masters Meet will be contested on Saturday, May 18 back at El Camino College.

At Masters, the top six finishers in each event advance to the CIF State Championships at Buchanan High School in Clovis on May 24 and 25.

Stark posted the highest individual finish of the day for Dana Hills, with Denker right behind.

Stark, a senior, earned silver with a second-place finish in the 1,600 at 4:15.05. Denker, a junior, took bronze for a third-place finish at 4:15.27, a personal record. Denker and Stark qualified with the eighth and ninth best times, respectively, out of the 12 Masters spots in the event.

Ray also earned a third-place bronze in the girls 300-meter hurdles. Ray, a senior, ran a time of 44.94 seconds and qualified seventh out of the nine Masters positions for the event.

Lawrence continued down the line with a fourth-place finish in the girls 800-meter. Lawrence, a junior, ran a time of 2:14.41, just 0.23 off her personal-best time. Lawrence qualified in the 10th of the event’s 12 Masters spots.

Ray, Lawrence and Rind, along with sophomore Camryn Toole, qualified with the girls 4×400-meter relay team. With Toole opening, followed by Ray, Rind and Lawrence, the Dolphins finished fourth in Division 1 at 3:50.51 and took the sixth of nine Masters spots in the event.