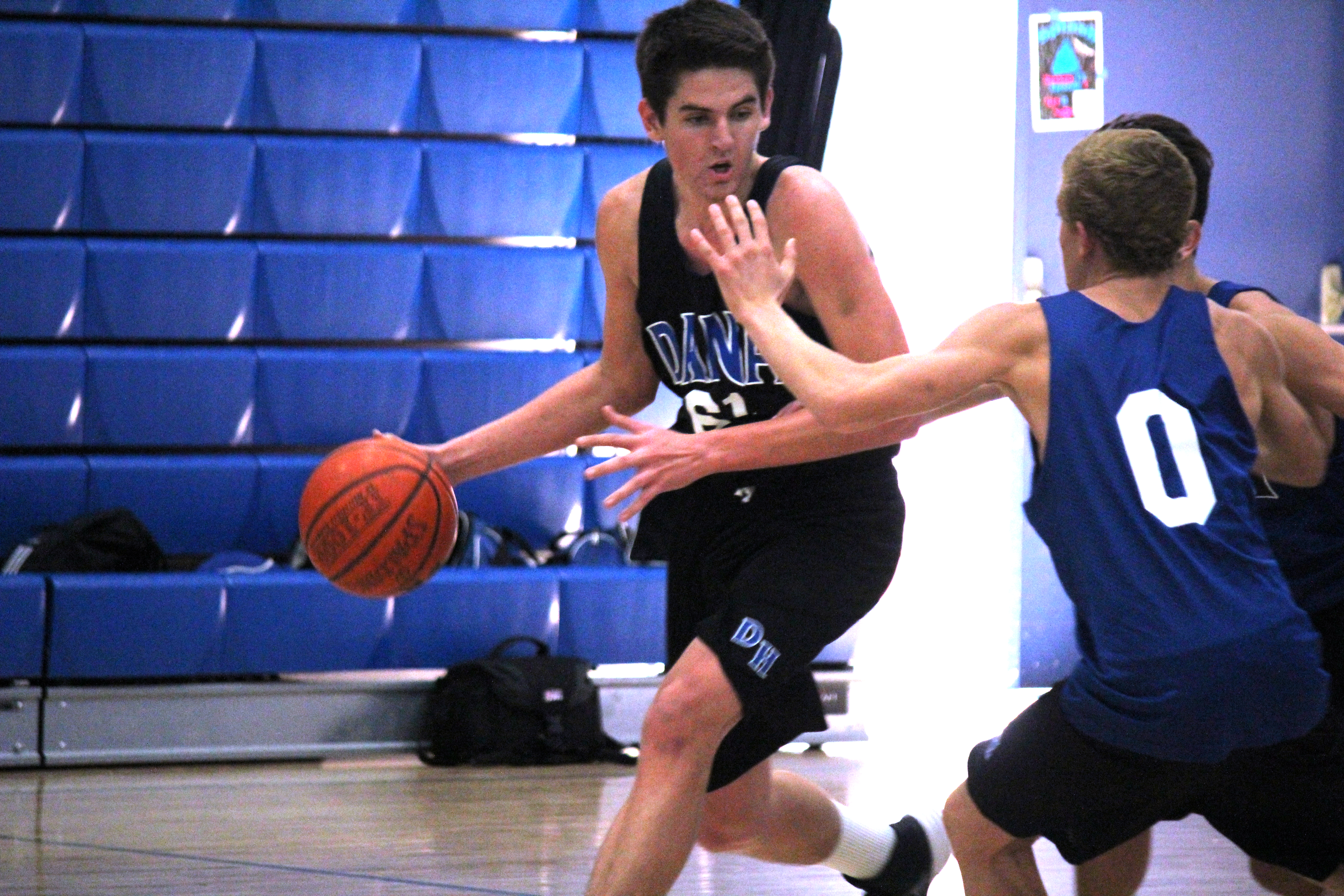 Follow us on Twitter @SouthOCsports for in-game updates and news regarding all the Dana Hills winter sports programs.

The Dana Hills boys basketball team started their bid in the Irvine World News Tournament with two consecutive wins over Valencia and Tustin and have positioned themselves to make an even deeper run through the tournament if they can emerge with a win over University on December 20.

The Dolphins (8-1) have been racking up wins in the tournament due to efficient shooting and their ability to out-rebound their opponents.

In the game against Valencia, the Dolphins grabbed 29 total rebounds and held Valencia to just 13 second-half points in a 41-27 win. The 27 points scored by Valencia is the fewest the Dolphins have allowed all season.

Dana Hills shot 59 percent from the field in a 56-46 win over Tustin on December 18, their second best mark of the early season. Senior James Taylor scored 22 points, making 10 of his 11 attempts. Taylor leads the team in shooting percentage (67 percent) among teammates with more than 50 shot attempts and has been the Dolphins leading scorer, averaging 14.2 points per game.

University will be a familiar foe for the Dolphins, as the two squared off against one another in the same tournament last year. The Dolphins breezed their way to a 90-68 win in 2012. Results were unavailable at press time.

The Dana Hills girls basketball team picked up their first win of the year in a 54-42 road victory over Rancho Alamitos on December 17.

The Dolphins (1-7) led wire-to-wire in the win en route to their highest point total of the early season.

Dana Hills hosted Corona del Mar in a nonleague contest on December 18 and lost, 63-20. The Dolphins were set to travel to play University on December 19. Results were not available at press time.

On December 21 the Dolphins will host the North vs. South Challenge. The Dolphins are set to play the final game of the day in a match against Northwood at 7 p.m.

The preseason schedule for the Dana Hills boys soccer team has not been an easy one. By December 26, four of the Dolphins’ previous five matches will have come against CIF-SS Division 1 top-10 opponents.

Following a 7-1 blowout loss to rival San Clemente, the top ranked team in the state, the Dolphins bounced back with wins over No. 9 Capistrano Valley and Laguna Beach on December 13 and December 16, respectively.

Edison rolled into Dolphins Stadium on December 18 riding a three-game win streak and routed the Dolphins 4-1 in a nonleague victory. Edison is currently the No. 3 ranked team in the CIF-SS Division 1 coaches’ poll.

The Dolphins will compete in the Mustang Cup at Trabuco Hills High School from December 26-28. Dana Hills opening round matchup will be against No. 6 Santa Margarita.

Dolphins Girls Soccer Suffers Back to Back Losses

The Dana Hills girls soccer previous three-match unbeaten streak came to an end on December 14 following a 1-0 loss to Upland.

The Dolphins then took on Mater Dei on December 18 and fell, 1-0, as part of the Mater Dei Premier Invitational. The Monarch’s Lauren Markwith scored the deciding goal. The Dolphins senior goalie Meghan Dickmann recorded eight saves in the loss.

The Dana Hills girls water polo team is in the midst of a 6-2 run that spans back to December 7. After a convincing win over El Dorado on December 7, the Dolphins have recorded wins over Villa Park, La Serna, Cathedral Catholic and Martin Luther King twice. The Dolphins’ two losses came against Montebello and San Marcos.

In the Dolphins’ most recent win, against Cathedral Catholic on December 14, Madison Baba tallied a team-high seven goals. Baba has been the Dolphins’ leading scorer in five of the team’s past six matches.

Dana Hills now preps for a nonleague match against Warren on January 4, with an eye set on South Coast League play the following week.