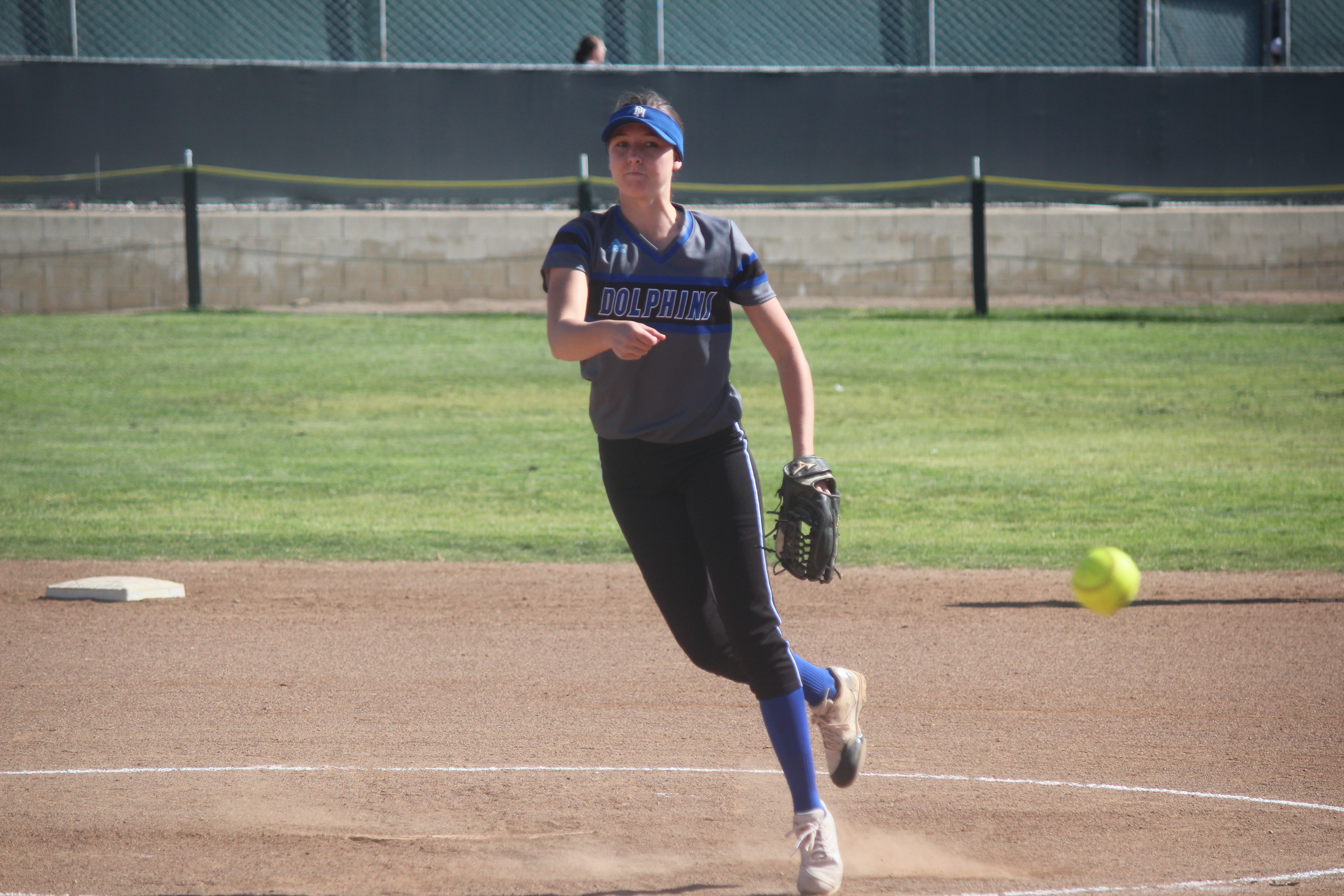 The Dana Hills softball lineup came ready to swing the bat against rival San Clemente on March 22. The Dolphins strung together five hits, including a first-inning home run, to plate six runs in the opening frame and cruise to a 12-6 nonleague victory.

Despite a strong wind gusting in toward home plate, the Dolphins batters were able to hit three home runs. Starting pitcher Serafine Parrish belted a first-inning two-run home run and swatted one more in the fourth, and Carlee Russo hit a grand slam in the second.

The runs have been coming in bunches for the Dolphins (8-7), who outscored Trabuco Hills on March 19 and San Clemente by a combined 23-7 margin. The Dolphins had not produced more than five runs in one game since March 12.

“We have been working on our hitting nonstop,” Dolphins head coach Brandon Cosenza said. “I felt like it was our greatest strength this season, it just took a little time to get everyone clicking.”

Dana Hills was not able to carry the momentum into its next game, however, and suffered a 5-3 loss to Mater Dei on March 23. The Dolphins were set to play a nonleague game against Edison on March 24. Results were not available at press time.

The defending South Coast League champion Dana Hills boys volleyball team hit a snag out of the gate in league play on March 15 when they lost to Tesoro in four sets. After a run through the Orange County Championship Tournament, where the Dolphins placed sixth, the team was swept by Trabuco Hills in a return to league play on March 22.

The Dolphins (16-7, 0-2 league) now face an uphill battle if they are to contend for the league championship. Dana Hills will host San Clemente (10-7, 0-1), a team that began the season ranked inside the CIF-SS Division 1 top-10 but has struggled recently.

The Dolphins defeated the Tritons in three sets during the consolation bracket of the Orange County Championships on March 19. Dana Hills lost the first set but came back to win 19-25, 25-22, 15-12.

It is very early in the league schedule, but Trabuco Hills and Tesoro currently sit atop the South Coast League Standings. Last season, the Mustangs and Titans finished fourth and fifth in league, respectively. Trabuco Hills has league wins over both the Dolphins and San Clemente this season.

Dolphins junior starter Hans Crouse threw three innings, allowing one run, and was replaced by senior Kayl Cota, who spun four innings of three-hit, no-run ball to get the win.

Dana Hills lost a nonleague game to Alemany 5-2 on March 21.

The Dolphins were scheduled to play a South Coast League game against Aliso Niguel, the fifth-ranked team in CIF-SS Division 1, on March 24. Results were not available at press time. The Wolverines (6-3, 1-1) have one league win over No. 6 El Toro and lost to Tesoro on March 22.

The Dana Hills boys tennis singles rotation had a strong showing in a 12-6 South Coast League victory over Aliso Niguel on March 22. The trio of players, which included Marek Michulka, Tyler Bloom and Michael Perez, won eight out of nine possible points to seal the win and improve Dana Hills’ league record to 2-0.

The Dana Hills boys lacrosse team has been gaining traction all season long. The Dolphins opened the season with a 10-6 win over Skyline of Utah on March 4, which turned out to be the first of six consecutive victories.

JSerra, a team that reached the finals of the US Lacrosse Orange County Championships last season, handed the Dolphins (7-1, 2-0) their lone loss of the season on March 18. JSerra defeated the Dolphins 15-9. But Dana Hills bounced back with arguably its strongest showing to-date in a 12-0 South Coast League victory over Laguna Hills.

The Dana Hills boys and girls swim teams split a dual league meet with rival San Clemente on March 22. The girls team lost to the visiting Tritons 98-72 and the boys team emerged with a 101-69 victory.

The Dana Hills boys track and field distance runners packed three runners inside the top-5 of the 3200-meter run at the Laguna Beach Invitational on March 19. Senior Mason Coppi won the event with a time of 9:03.74, Jake Ogden took third (9:05.26) and Jack Landgraf took fourth (9:07.39).