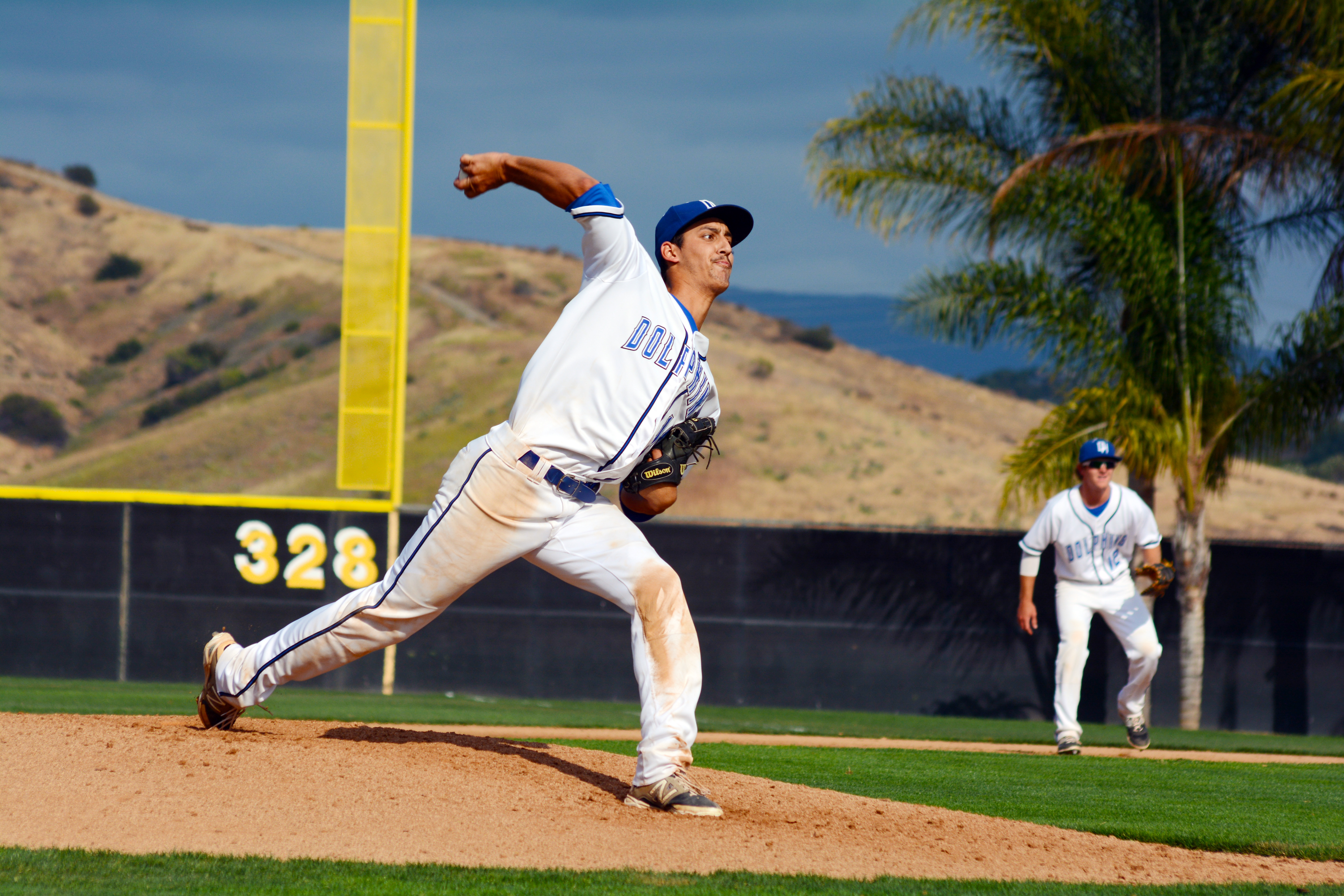 The last time the Dana Hills and San Clemente baseball teams squared off against one another, it was for the Loara Tournament championship back in March. San Clemente won that tilt in extra innings but on April 22, the Dolphins extracted some revenge by sweeping the Tritons in a nonleague double header at Saddleback College.

The Dolphins (21-4, 3-3 league) got yet another strong performance by senior Marrick Crouse (7-2) in the opening game. Crouse pitched his second consecutive complete game, allowing only six hits in a narrow 2-1 victory.

Dana Hills took a 1-0 lead in the second inning after Thomas Waldenberger drew a bases loaded walk. Reid Lundeen went 2-2 with a double, an RBI and a run scored in the first game.

Zach Wolf and Hans Crouse combined to pitch the Dolphins to a 5-4 victory in the second game.

Jay Schuyler plated Justin Sterner to make it 1-0 in the fourth inning and the Tritons responded in the bottom half on an RBI triple by Will Tribucher. Trevor Beard would swat a go-ahead RBI later to make it 2-1, San Clemente.

Both teams exchanged runs and were tied 4-4 entering the seventh. The Dolphins scored the winning run on a Tritons wild pitch.

Dana Hills will return to league play against Aliso Niguel on April 29. –Kevin Dahlgren contributed to this report

Georgia said April 16 that the school has sent their recommendation regarding the hire to the Capistrano Unified School District board for approval.

Skinner will replace former head coach Todd Rusinkovich, who resigned during the offseason.

Skinner has been with the Dolphins program since the 2007 season and has served in various roles including assistant head coach, offensive line coach, strength and conditioning coach and assistant to the offensive coordinator, according to Georgia. Skinner coached at Villa Park High School from 1996-2006.

Although he has been a familiar face on campus, Georgia said Skinner entered the interview with a fresh, new plan on where he will take the program.

“Phil separated himself by coming in and saying this is how he was going to get it done,” Georgia said. “He’s going to insert fun, get the kids and the community excited. It was a really, really good interview.”

Skinner is already a district employee and Georgia expects the hiring process to take place without delay.

The Dolphins are coming off a disappointing season that saw them go 1-9 overall and 0-4 in the South Coast League.

Volleyball Stays Out in Front

The Dana Hills boys volleyball team has maintained their first-place standing in the South Coast League from the get-go and has yet to drop a match at the mid-way point of their league season.

The Dolphins (19-1, 5-0) picked up a clean three-set sweep of Tesoro on April 21, putting them at a perfect 5-0 in league, one game clear of rival San Clemente.

Up next for Dana Hills, who has not lost since March 21, is a nonleague road game against Laguna Beach, the top-ranked team in CIF-SS Division 2.

Dana Hills entered the week as the No. 6 team ranked in CIF-SS Division 1.

The Dana Hills girls lacrosse team has been the tough-luck loser in its last two contests, dropping back to back league games against San Juan Hills and Laguna Hills on April 21 and April 22, respectively.

Dana Hills is set to host Laguna Hills again on April 24 and will cap off league play with an away game against El Toro on May 1.

The Dolphins play their home matches at El Niguel Country Club, a course that is notoriously hard to navigate through. El Niguel is tight, long and almost always has an ocean breeze running through it.

Dana Hills used their home course knowledge to their benefit on April 14 against rival Tesoro, defeating the visiting Titans 200-201. The Dolphins’ Clay Feagler and Tanner Podres each shot 38 (+2) to earn co-medalist honors with Tesoro’s Robert Beard and Jack Ireland.

However, the Dolphins win, and first-place standing, was short lived, as Tesoro pulled off their own narrow victory one day later at Coto de Caza Golf Course. Feagler was the low man on the day with a 37 (+1), but the Titans prevailed 195-199.

The Dolphins now sit one game behind Tesoro in the South Coast League standings. Tesoro has already wrapped up league play with a 5-1 record. The Dolphins were set to play El Toro in their final match of the season on April 23. Results were not available at press time. If the Dolphins win, they will split the league title with Tesoro for a second consecutive year.

The Dana Hills boys and girls track and field teams beat Capistrano Valley in a dual league meet on April 15. The girls team won 90-46 while the boys team won 113-23.

The Dolphins cleaned up in the field events, with the boys and girls teams each earning victories in the long jump, triple jump, high jump, shot put and discus.

The Dolphins track and field teams were set to compete against Trabuco Hills on April 23. Results were not available at press time.