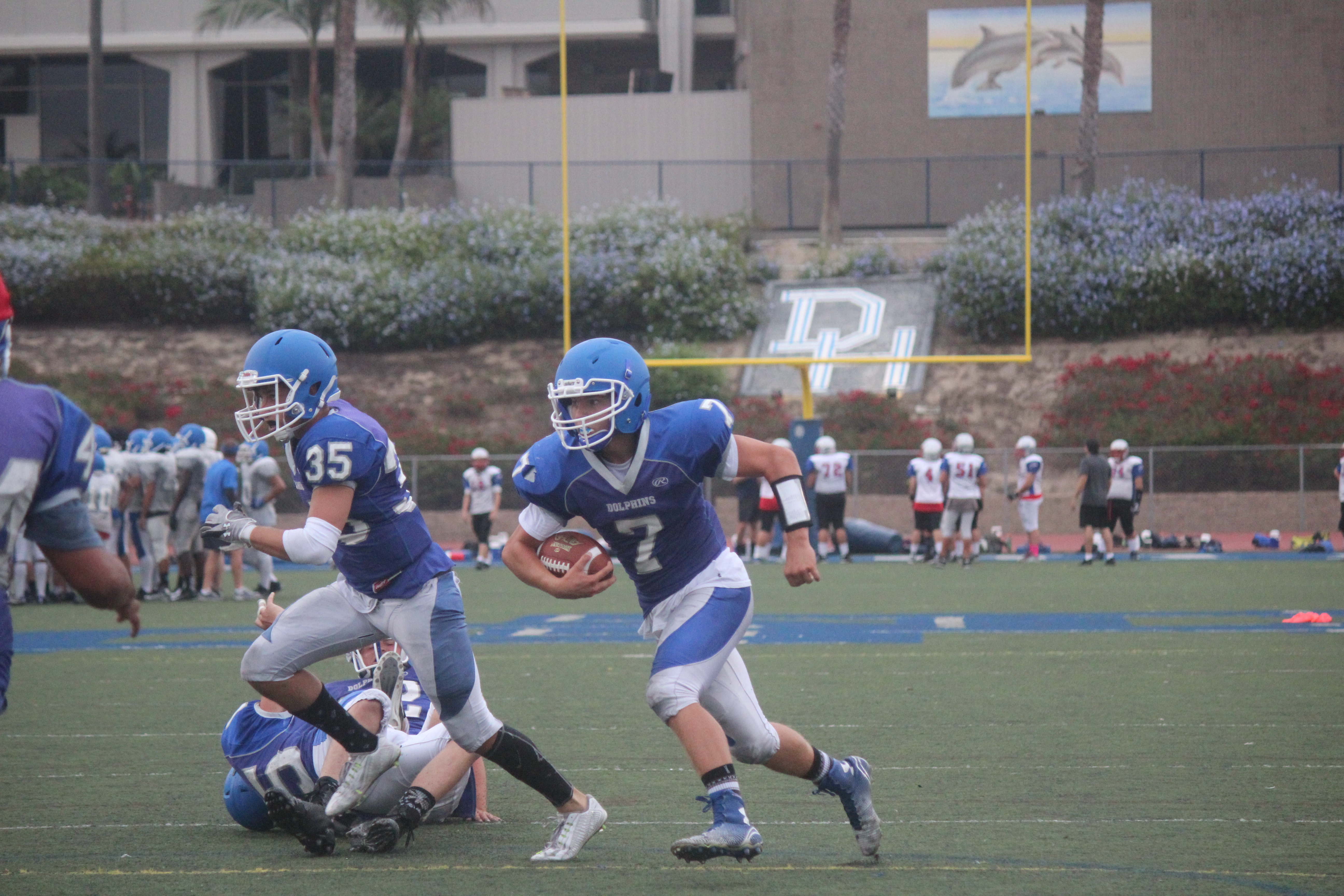 The offseason for the Dana Hills High School football team was one filled with change.

Following a season that saw the Dolphins win one game and go winless in the competitive South Coast League, former head coach Todd Rusinkovich resigned. When looking for a replacement, the school’s administration did not have to look very far. Phil Skinner, who has been an assistant coach with the program since 2006, was named the new head coach.

Skinner and his coaching staff have had to go through a wide array of obstacles in order to get the team ready for the upcoming season. A large amount of seniors graduated from last year’s team and a key defensive player, linebacker Corey Selenski, transferred to nearby JSerra Catholic. On top of that, Skinner wanted to implement a new, up-tempo offense. The young Dolphins team that returns 12 players with experience from last year had to hit the ground running.

“The kids have really risen to the challenge … There’s obviously learning curves every time you’re the new head guy. They’ve not only met the expectations, they’ve exceeded them,” Skinner said.

Skinner wants his offense operating in double time. From the time the play ends, the Dolphins are looking to get their next play off in 17 seconds or less. It’s a system the coaching staff feels best suits their personnel and style.

The Dolphins are not the biggest team on paper but have multiple weapons with speed at their disposal. Among the fastest players on the team is senior running back Connor McCloud, who was a bright spot on offense last year.

McCloud played in nine games, carrying the ball 64 times for a team-high 512 yards and three touchdowns. He was also a threat on special teams as a kick returner, averaging just over 20 yards per return. McCloud will remain in that role this season and will return to man one of the team’s starting cornerback spots.

“(McCloud) is a special player. He’s got those cuts. He’s quick and he has the feet and the legwork to make some people miss,” Skinner said.

Joining McCloud in the backfield will be sophomore quarterback Corey Cisowski. Skinner said the Dolphins will use several different packages on offense and when the play calls for a man under center, Cisowski will be that pocket passer. Junior Charlie Bortnick, who will play receiver and safety, will also get time at quarterback in different packages.

One major change from last year will be an emphasis on special teams, according to Skinner. The first-year head coach’s practice plan regularly has a large chunk of it devoted to special teams, where players like McCloud and junior David Dylan Arrone will be unleashed as returners.

One word that kept popping up at Dolphins training camp was “aggressive”. Skinner used it while describing the special teams, the offense and especially when describing the team’s secondary, which returns three players with experience.

McCloud, Bortnick and junior cornerback Ryder Lynch all patrolled the secondary together last season and have built up a bit of chemistry as a result. Skinner has been encouraging the trio to use their athleticism and gamble a bit in hopes of making a game-changing play.

“I think they work very well together. With that, we’re able to disguise coverages and play little games with that,” Skinner said. “We try to get takeaways, so they have the green light. They’re going to go for the ball; they’re going to ball hawk a little bit. Playing safe is one thing and playing aggressive is another. I like them going after it.”

The Dolphins schedule remains a daunting one this season, with tough early games slated against rival San Clemente and reigning CIF-SS Southern Division champion Garden Grove. Things will only get tougher when Dana Hills heads into South Coast League play and a league-opening tilt against Mission Viejo on Oct. 9.

For a good amount of players on the Dolphins roster, this will be the first time they play against the caliber of teams that lurk in the South Coast League. For the young returning players, like Bortnick, that quality of opposition is all they have known. Bortnick’s first varsity game was against the Diablos as a sophomore last season. Bortnick, along with his other young and experienced teammates, are using that knowledge to fuel their drive in 2015.

“We’re pretty experienced. We’ve played against the best teams that we’re going to play (this year). We know what’s happening and we just have to get all of the other guys on the same page,” Bortnick said.

Dana Hills will open their season on the road against Tustin on Aug. 28.

Click the link below to view the PDF version of the full 2015 Dana Hills High School football preview.