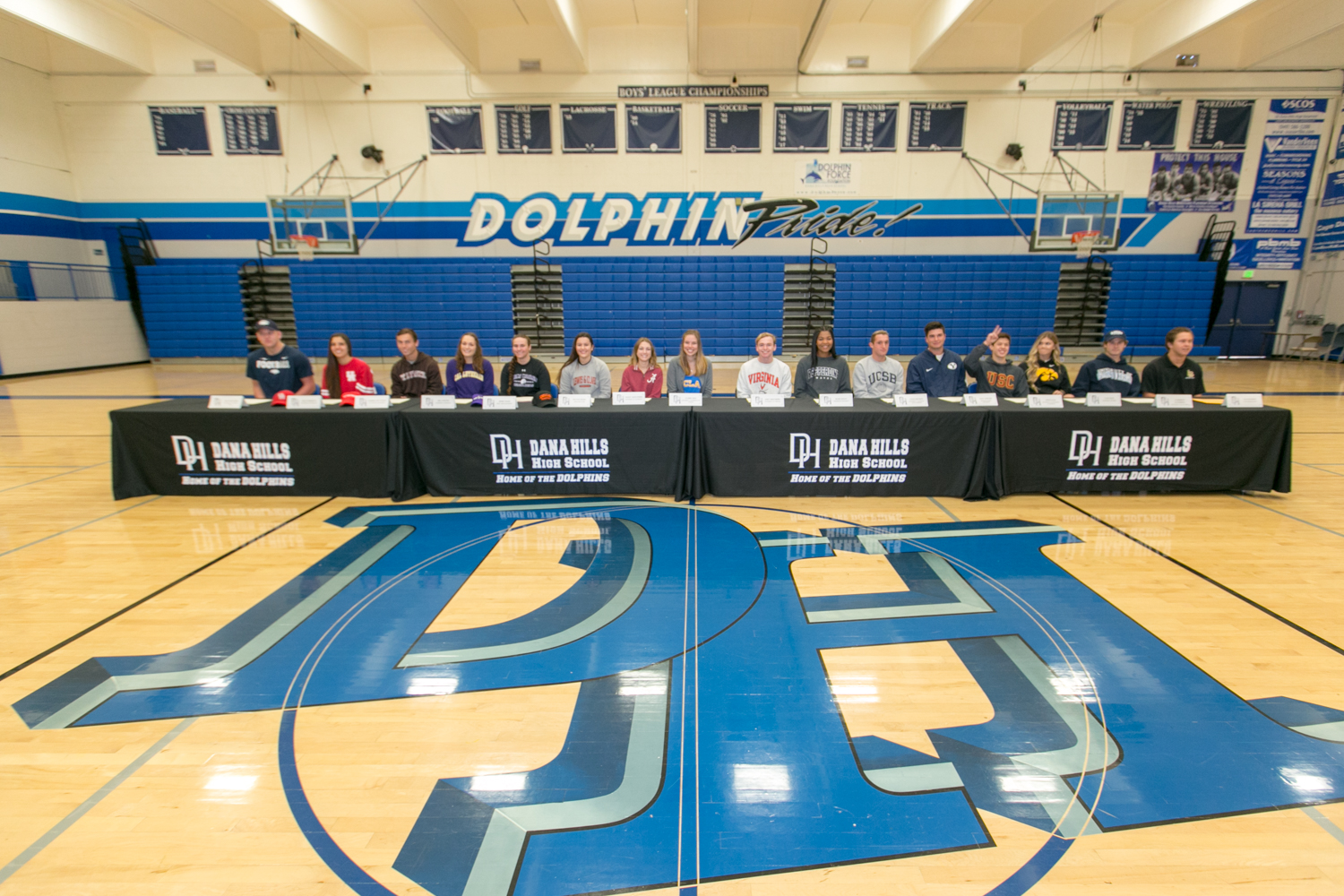 Punters are people too.

Punters can be scholarship athletes as well.

Dana Hills’ Eric Fellenzer is now the latter as the Dolphins punter signed his national letter of intent to play football at the University of Nevada Reno in a Signing Day event at Dana Hills High School on Feb. 7.

“Ever since I started playing football, I wanted to play football in college,” an emotional Fellenzer said. “It just means so much, and I’m finally making this happen. So many sacrifices have been made to make this happen.”

Fellenzer’s path to becoming an NCAA Division 1 athlete started on the soccer pitch where his talented leg didn’t work within the constraints of being a goalkeeper.

“He kind of got frustrated with kicking the ball,” Eric’s mom, Janet Fellenzer, said. “It would go beyond midfield and it ended up, for lack of a better word, a penalty for him. Someone at that point in eighth grade said, you need to get that kid into kicking. And it just took off from there.”

While the football team has struggled with results, Fellenzer was an undisputed bright spot. Dolphins coach Phil Skinner said Fellenzer was the special teams player of the week in all 10 games last season.

“He’s a kicker that has come through at the most clutch times, has impressed all the way through,” Skinner said. “He’s been a leader of our special teams world. He’s got that leg, and he works hard. This isn’t some natural thing where he just has to step on the field.”

Skinner and Janet Fellenzer all spoke to Eric’s hard work and dedication. Every athlete presented with Fellenzer at Signing Day has a background of sacrifices and strong work ethic that are essential to reaching that next level.

Each athlete also has their goals. Fellenzer’s goal comes with the reason he chose Nevada.

“Coach (Tommy) Perry, the special teams coach,” Fellenzer said of the reason behind the decision. “He’s had an All-American everywhere he’s coached. He hasn’t had one at Reno yet. Hopefully I can be that guy.”

Fellenzer will get that chance in the fall after a spring and summer of lifting weights and after-dark kicking sessions, as he continues to do now.

Here’s the roster of the 17 student-athletes honored at Dana Hills on Feb. 7 listed alphabetically with sport and school:

For a full photo gallery from Feb. 7’s event, go to www.danapointtimes.com.