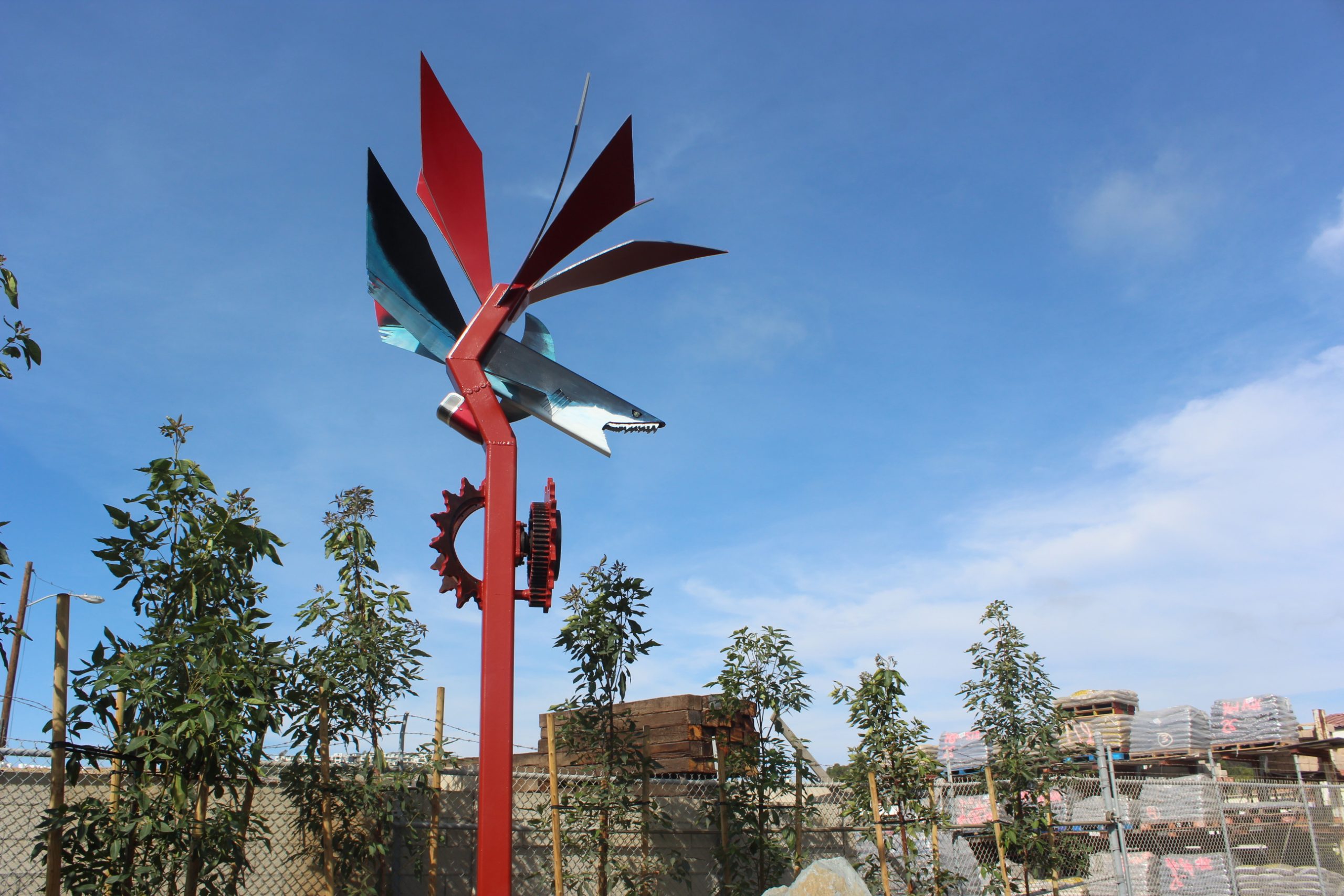 Unused scraps of steel found new life in the form of abstract art sculpture in Doheny Village as a part of the Doheny Village Public Art Program. At the end of the Las Vegas Avenue cul-de-sac, the scrap-metal shark sculpture overlooks the neighboring Steel Welding and Fabrication site and Doheny Builders Supply.

Steel fabricators Jerry Lansky and Chris Caldwell had saved unused scraps from different projects for years, hoping to commemorate the history of the welding site in Doheny Village in a public art piece. Lansky has worked in the yard since the ’80s, with Caldwell and Lansky running the yard together now, working on structural steel fabrication.

The sculpture is the latest installation in the Doheny Village Public Art Program, in addition to a  public mural that was installed at the corner of Las Vegas Avenue and Doheny Park Road in February.

Throughout the rezoning efforts, city staff worked with the Doheny Village Merchants Association to try to “understand what makes Doheny Village special to those folks,” Mayor Pro Tem Mike Frost said at a ribbon-cutting ceremony for the sculpture on July 21.

“What I see is a city that’s working well with the folks down here, not to change, but to enhance and to leverage the uniqueness down here to create a great place,” Frost said.

Staff worked closely with Lansky and Caldwell throughout the project, Caldwell said.

“The city has really been behind us the whole way with everything that we’ve endeavored to do,” Lansky said.

“When we were having our meetings with the Doheny Village Merchants Association, part of what they wanted down here was some kind of art in public places or something in the neighborhood, shine the place up a little bit, and we were like, ‘Well, we can make some kind of structural steel artwork,’ ” Lansky said.

The pieces of scrap metal “were laying on a pallet for a long time, and we got tired of moving them around,” Lansky said. “All those are scraps from an actual piece for a job. I knew when I was cutting it up, we were going to make that into something, but when you’ve got full-time work, it’s hard to stop and do something artsy like that.”

There was no real plan beforehand, Chris Caldwell said of the sculpture, “It just kind of came together.”

The entire sculpture was constructed from scrap metal.

“As we found pieces laying on the ground that looked like the shark, I said, ‘Hey, that looks like a shark,’ and Chris said, ‘Get out of the way, I’ll make the shark.’ ”

The top pieces of the sculpture or “wings” portion came from a project with Jon L. Construction, and the gears were from a local rebar vendor and a neighbor’s tractor.

The back side of the sculpture sports a piece of fender from a Harley-Davidson motorcycle owned by Eddie Hygh, one of Lansky’s friends. Eddie Hygh worked with Lansky for years at the fabrication site before he passed away in June 2020, according to his son, Chance Hygh.

“My father spent a ton of time here with Jerry doing a lot of the steel fabrication,” Chance Hygh said. “He was the brains and the numbers, and Jerry was the skill and the metal, essentially.”

Eddie Hygh had been in a motorcycle crash, Chance said. Lansky asked to use the “busted-up fender” to incorporate it into the sculpture.

“It’s a great way to memorialize him and contribute to the city,” Chance said. “I didn’t know that was happening, so it’s cool to see.”

The new sculpture at the end of the bustling, industrial cul-de-sac was a collaboration of the local business community members in an effort to beautify Doheny Village.

“You have no idea unless you’re here at 8 o’clock on a Monday morning how much commerce happens in this little area, and all the people that come in and out of Doheny Village Supply or in and out of Robling Mill,” Councilmember Jamey Federico said.

Caldwell noted that he hopes there will be more unique, handmade art pieces added in the city in the future.

“I know that when people come down here and do a U-turn because they’re lost, they’re going to see this, and they’re going to hopefully notice it because it’s pretty cool,” Caldwell said. “Hopefully, there’ll be more of it.”

Lansky added that the sculpture commemorates the decadeslong historic use of the site for welding and construction, while serving to beautify the area.

“I think it’s great, because we still do heavy structural steel fabrication right here, but it can also look nice at the same time,” Lansky said. “We’re mixing the two very well, and it’s been for 50 or 60 years right on this street.”