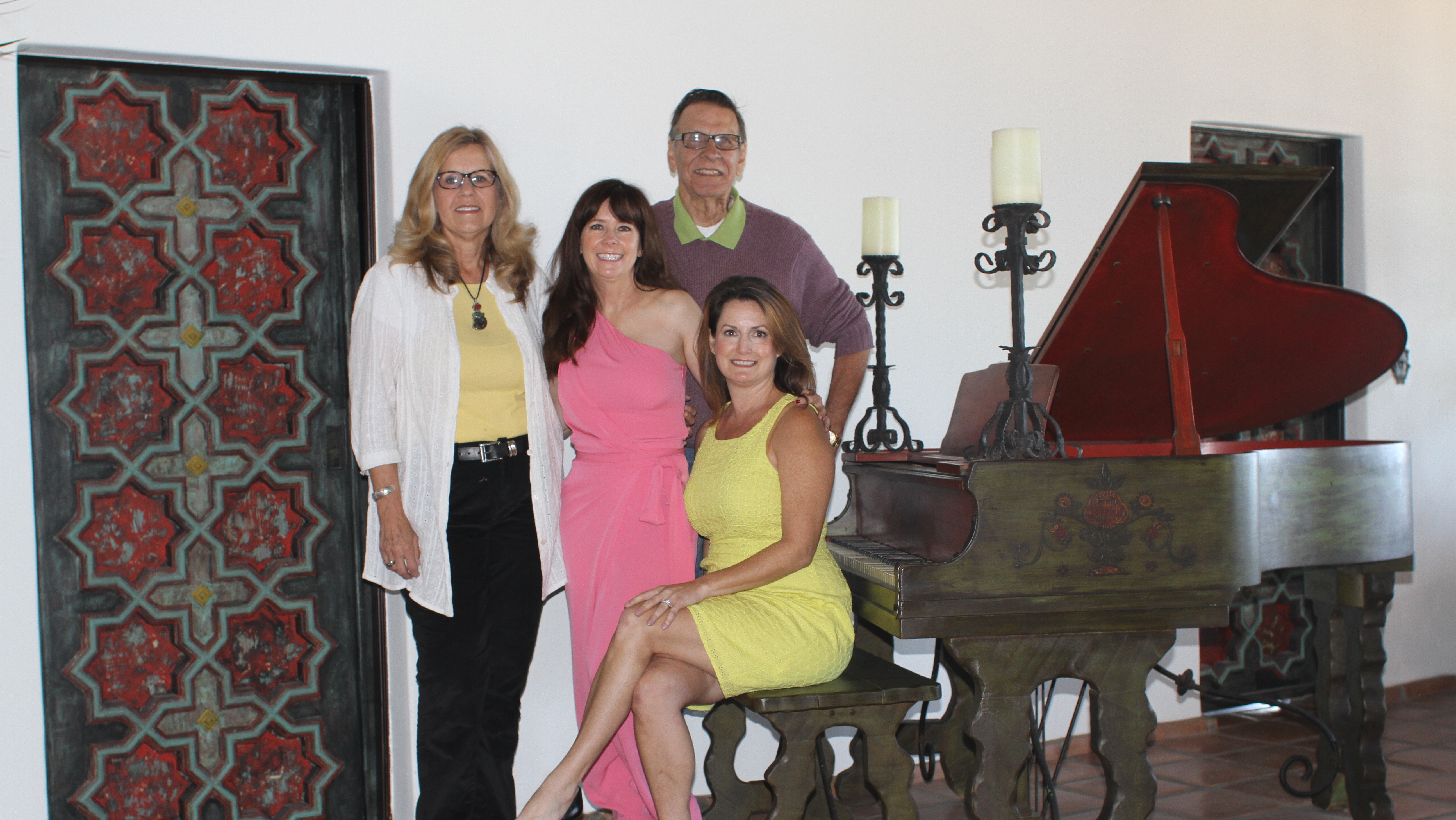 Doheny House owners to host gala cancer benefit, with and in honor of the woman instrumental in helping them purchase of the now fully-restored historic home

A house is just walls, floor and roof, that is until people make it a home. In Dana Point, one historic home has gone through many iterations of house and home since its construction in the ’20s and subsequent ownership by some who cherished it for its Spanish Colonial Revival style and preeminent place in the city’s history, and some who only saw a dilapidated structure on five valuable ocean view lots that could translate into big money by razing it and erecting five homes in its place.

The quest of current owners, Dr. Dean Clark and wife Joyce Clark, to return it to its original glory and make it their dream home, brought many challenges as well as a new and cherished friendship with Kristine Taylor, the wealth preservation and finance company owner who helped the Clarks acquire the property while battling for her life against breast cancer.

The Clarks have agreed to unveil the Doheny House’s complete, top to bottom period-correct restoration at the upcoming Pink Gala fundraiser to benefit cancer patients at Orange Coast Memorial Hospital, as well as other programs of The Kristine Taylor Philanthropies, on Saturday, May 2 at 6 p.m.

The evening will feature special guests, live music, fine dining, a high-end fashion show, silent auction, a live art auction and the opportunity to have a look inside one of the area’s most beautiful and historic homes.

Admission to the gala ranges from $250 for an individual, to the $20,000 Gold Sponsor level which includes two tables for 10, champagne, a one-week stay in Maui at the Westin Villas Resort, a private reception with two-time Pulitzer Prize-winning political cartoon artist, Michael Ramirez; luxury car transportation to and from the gala by JStar Motors, private coffee label for a year of coffee production, a commemorative gift and prominent recognition in pre- and post-event media and more. Tickets and more information can be found at www.kristinetaylorphilanthropies.org.

The other six levels of sponsorship also include similar perks, and 100 percent of all proceeds will support the following causes: Hands of Hope International, facilitating surgical reconstruction and limb-saving surgery for disadvantaged patients of Dr. Mark Kobayashi; a tomosynthesis machine featuring digital 3-D mammography at Orange Coast Memorial Medical Center; and with support from oncologist, Dr. Jack Jacoub, providing wigs, housing and transportation for cancer patients.

A series of coincidences—Joyce Clark and Taylor describe as serendipities—aligned the lives of the group of people making the event possible.

From a bank president whose wife was also stricken with cancer agreeing to work with Taylor to make it feasible for the Clarks to purchase the house despite the massive loan on the property, to a chance meeting with fellow patient of Dr. Kobayashi and cancer survivor, Rebecca Vlok, who would join in organizing the gala, Taylor said the experience was life-changing.

“When you bond with people who have the same philosophy in life, like the Clarks—giving back whenever possible—and the fact that they had confidence in me to do what I said I could do despite my illness, they became a source of support for me as well,” Taylor said.

“If it wasn’t for Kristine, this house never would have happened for us,” Clark said. “That’s why when she asked if she could have a fundraiser here we said yes. Thinking back to the angst of what Kristine was going through while making this home possible for us; we want to pay it forward.”

The Clarks may have never had the opportunity to purchase Doheny House if not for the efforts of Dana Point mayor and historian Carlos Olvera, who fought for the protection of the historic structure.

Read on for his account of the home’s history and his efforts to save it from destruction.

During the mid-1920s, coastal south Orange County was the place for new development and Capistrano Beach was prime real estate.

After several starts and buyouts, Los Angeles oil tycoon Edward L. Doheny bought the rights to the developments of Capistrano Beach, the Palisades and Beach Road. The business area was renamed Doheny Park, the Beach Club was expanded and the Capistrano Beach Pier built.

Up on the Palisades—the bluff overlooking Capistrano Beach—new homes were constructed. Palisades House No. 1 offered a front-row seat view of the Pacific, spanning across five deeded lots.

The new development was intended for Doheny’s son, Edward L. “Ned” Doheny, Jr., to manage and build for the Petroleum Securities Company which was owned by the family.

His development was announced and started in January 1929. Edward Sr. was later involved in what is remembered as the Tea Pot Dome Scandal. The scandal involved Ned, who was to testify in a federal case against the family. In February, Ned was shot and killed by his assistant, who then committed suicide. Edward, grief stricken, began to divest of his interest in Capistrano Beach. Although the project superintendent, Harrison Leyden, lived in Palisades House No. 1 until the Doheny family eventually sold it in the mid-1930s, it was always referred to as the Doheny House.

As the house changed hands—even being put up for auction once—it passed through the stages of being old with a need for improvements, to historic with a need for restoration.

When Dana Point became an incorporated city in 1989, one of the first necessities was a General Plan to set the atmosphere of the new city. As Planning Commission chairman at the time, I initiated a historic element to be included, in order to voluntarily incentivize historic building preservation. It wasn’t until nearly 20 years later that all the elements were in place and the first two homes were given that status. The Doheny House and the Dolph House—Dana Point’s oldest home, built in 1914 on Capistrano by the Sea—were officially placed on the Dana Point Historical Register.

By then the real estate market was booming. In 2006, the Doheny House owner sought to sell the rambling single family residence with the intent to demolish the house and build five modern “McMansions” on the lots.

The process fell under the California Environmental Quality Act. By that time I had taken on the role of president of the Dana Point Historical Society. With my experience on the Planning Commission and knowledge of historic preservation, I felt well-suited to defend and represent the historic house. By invoking CEQA, a historical review of the property was required, and the debate began.

CEQA requires that alternatives be identified that could mitigate the demolition. Alternative plans were developed, but none of the five were selected, and the owner’s request remained just to demolish the historic house. The historic designation was also challenged but it was found that the requirements of the federal statutes of historic designation could be met.

The real estate recession of 2007 to 2009 was in full swing and all that was left was a bankrupt company, an owner, and an investor, who somehow held some control of the property. After a few more years of wrangling, Dr. Dean Clark and his wife Joyce became the proud owners of the property.

The Clarks, wishing to return the majestic home and bluff-top land to its original state, began the restoration process.

With a need for finding craftsmen with the skills necessary for the job, and adhering to the city’s strict restoration codes, I again lent a hand to the Clarks, also coaching them on how to qualify for financial assistance through the California Historic Mill’s Act.

After nine years of involvement with protecting this historic treasure, I am eagerly anticipating the gala, now representing the city as mayor of Dana Point.