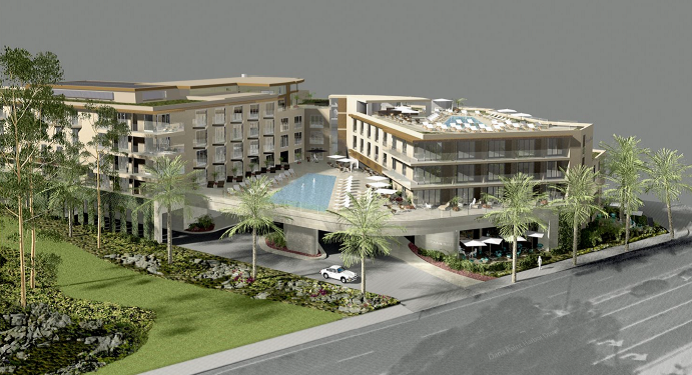 The Planning Commission denied the 250-room Doheny Hotel last month, but the hotel’s developer, Beverly Hills Hospitality Group, is now turning to the City Council for the OK.

This is a measure taken with all appeals. Once the appeal is deemed complete, staff will work with Mayor Lisa Bartlett to set the agenda. No date has been identified for a hearing.

On April 14, Planning Commissioners denied the developer’s applications to build a two- to five-story hotel at the corner of Pacific Coast Highway and Dana Point Harbor Drive.

Echoing public concerns over the project’s height, density and possible traffic impacts, the commission rejected the proposal but urged the developer to return with a project that closer fits city codes.

The appeal continues an eight-year process for Michael Draz, chief executive officer of Beverly Hills Hospitality Group, who began acquiring three adjoining parcels for the project in 2006. Applications were submitted to the city in 2009 and the commission first heard plans in 2011.

The project’s environmental study was released last summer and a series of public hearings followed. The commission rejected the proposal in a 4-0 vote with Norm Denton recused.

The developer and its public relations firm, Government Solutions Inc., made contributions to both Mayor Lisa Bartlett and Councilman Bill Brough’s campaigns, totaling $1,650 and $1,150, respectively. Bartlett is running for Orange County supervisor, while Brough is seeking the state Assembly’s 73rd District seat.

Bartlett returned funds donated by the developer, campaign spokesman Jeff Corless said. Brough said that despite the contributions he plans to participate in the discussion. He feels there is no conflict.

According to Chotkevys, Munoz said campaign contributions do not impact an elected official’s ability to vote on a project.