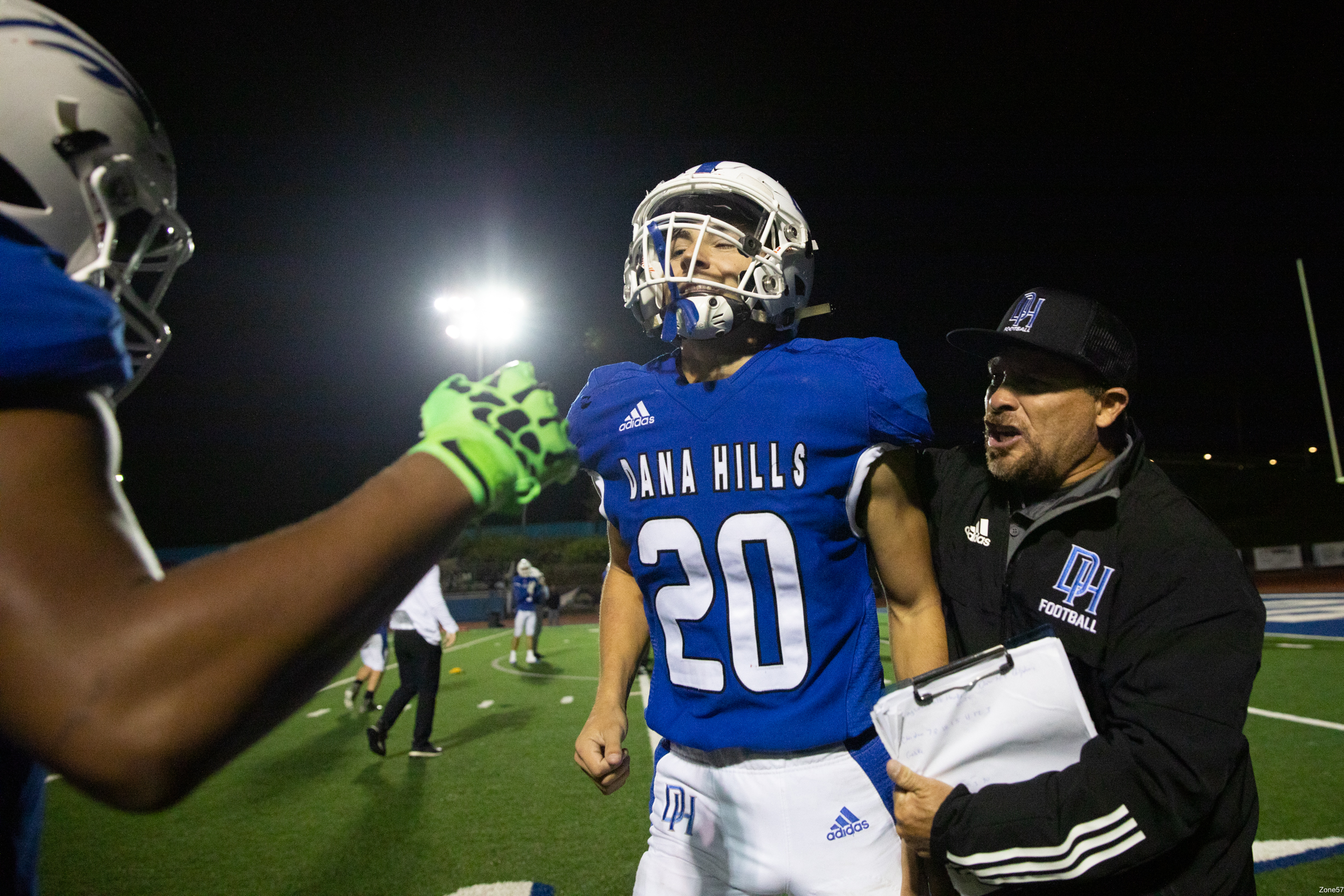 Wiesen’s 18-yard interception return for a touchdown late in the Dolphins’ 55-23 win over Laguna Hills on Homecoming night “was really something out of a movie.”

Wiesen’s father suffered a sudden heart attack on Sunday, Oct. 17 and died on Tuesday, Oct. 19. It was Jagger’s Dolphin teammates that came to his house on Sunday to wake him up from a nap and told Wiesen to call his mother.

Jagger returned to practice on that Wednesday, Oct. 20, and while Dana Hills (7-2, 1-1) was cruising to one of its biggest league victories in years over Laguna Hills (7-2, 1-1), Wiesen had the incredible happen.

Dana Hills linebacker Jagger Wiesen talks about his interception return for TD in his first game since his father’s sudden death on Tuesday.

Wiesen was also instrumental to the full defensive effort in the Dolphins’ 55-23 win on Homecoming night. @dhhs_athletics @tonyhenney pic.twitter.com/tYrZ2aw4AU

A Laguna Hills receiver attempted to grab a low pass, and the Dana Hills defense arrived to make the stop and put the ball into play.

“My partner in crime, Ethan Geske, made a big play, big hit, popped the ball out of the guy’s hands and it was just right there perfectly,” Wiesen said. “I felt my boy Hayden (Dendiu) on my back just pushing me, saying, ‘Crib it! Crib it! Crib it!’ So, I turned on the burners and got in there and celebrated. I look up at the man who did it.”

Wiesen said his first thought upon crossing the goal line was of his father, who meant “everything” to him. The touchdown sent the entire Dana Hills bench streaming into the endzone as the Dolphins surrounded their teammate and friend on what became a more than emotional night.

“That was… I can’t even explain. That’s unreal,” Wiesen said. “Everything is for the big man upstairs.”

The Dolphins received unsportsmanlike conduct penalties for coming off the bench to celebrate. However, Dana Hills coach Tony Henney said he’d accept that penalty any day of the week in exchange for that moment.

“It’s one of the coolest things I’ve ever seen in a football game,” Henney said. “To have that kid, to have that happen for him was really special. It was really cool.”

Wiesen said that Henney was instrumental in getting him to the game and helping focus for a huge defensive performance. In addition to the pick-six touchdown, Wiesen was the Dana Hills’ leader in tackles by a wide margin with 17 total, including eight solo tackles and two tackles for loss.

“Coach has been calling me every day,” Wiesen said. “You want to talk to some great guy, it’s coach. He hasn’t let me breathe one time. He’s an awesome guy. All the confidence I played with today is for him. He got me prepared.”

The entire Dana Hills football team was prepared when it came to the rest of the game on Friday.

The Dolphins put up another signature offensive performance as senior quarterback Bo Kelly completed 13 of 18 passes for 281 yards to tie a career-high in touchdown passes with five. Four different receivers caught TD passes with Dendiu catching two touchdowns. Seniors Omarjaye Black, Owen Chambers and James Allemann each had touchdown grabs. Chambers also ran back a 94-yard kickoff return for a score. Junior Christian Guarascio put an exclamation point on the night with a 75-yard touchdown run in the fourth quarter.

TOUCHDOWN: Dana Hills back at it again. Kelly hits Chambers deep, and Chambers hangs with the catch on a 45 yard TD pass. @bokellyy @OwenCha16498928

With the leading effort of Wiesen, Dana Hills held Laguna Hills under 80 yards rushing on the night. Junior Blaize Bolter recovered a fumble, and Allemann, senior Jaden Kessi and sophomore Noah Brown each had sacks.

“When you get into these games late in the year, one of those penalties could be the deciding factor in the game,” Henney said. “That penalty can decide whether your shoulder pads are going on your back at the next Monday practice.”

With the win, Dana Hills got one step closer to clinching its first CIF-SS playoff berth since 2013. It’s possible the Dolphins have already done enough to take a potential at-large playoff berth, but it’ll be best for Dana Hills to take out any questions.

Dana Hills can likely clinch one of the Pacific Hills League’s two automatic playoff berths with a win at Portola in the season finale on Friday, Oct. 29. If Laguna Hills upsets Irvine, there would be a three-way tie for the league title for a second straight season, which would cause one of the three teams to have to be considered for an at-large berth instead of a guaranteed entry.

CIF-SS introduced a new computer ranking-based playoff system where divisions won’t be announced until the brackets are released on Sunday, Oct. 31. Questions of seedings and divisions have answers only CIF-SS and the calpreps.com computers will know until the Sunday release.