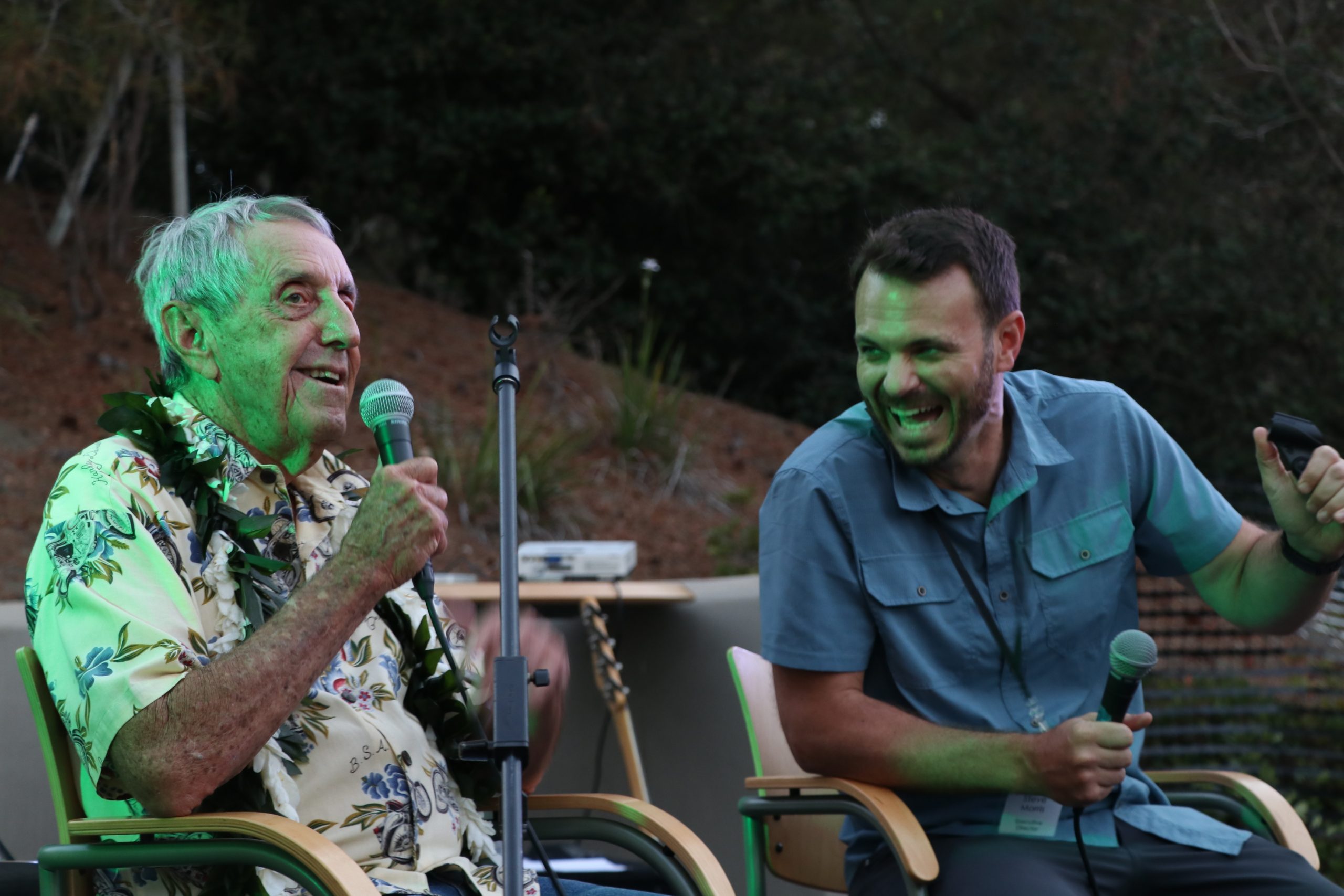 For all my money, I don’t think there is anybody out there in surfing with more good stories to tell than Dick Metz. At 92, he’s certainly seen and done it all, and he absolutely relishes the opportunity to share his experiences.

Metz, the founder of the Surfing Heritage and Culture Center (SHACC) in San Clemente, will be honored on Saturday, Aug 14, with a Lifetime Achievement Award at the Surf Industry Manufacturers Association’s Waterman’s Ball.

To get the party started early, though, more than 100 friends gathered at SHACC this past weekend to toast the man they know and love.

Born in Laguna Beach in 1929, Metz’s story goes all the way back to the early days of California surfing. His father ran a restaurant in Laguna Beach, and when the era’s Hollywood stars would find their way down to the beach for a long weekend, the Metz family would serve them.

“I used to play with Shirley Temple on the beach on weekends,” Metz recalls. “She was the same age as I was, and her folks would stop at the restaurant.”

It didn’t take Metz too long to find his way onto a surfboard. By 7 years old, he was hanging at San Onofre with legends Peanuts Larson and Hevs McClelland. He eventually graduated from Santa Barbara State College in 1953 before serving in the Army.

Landing back in Laguna in 1954, with the post-World War II surf scene booming, Metz teamed with his pal Hobie Alter for the launch of the Hobie Surf Shop in Dana Point. It would become the blueprint for the lifestyle and culture that was soon to blossom around the planet.

In 1958, he hopped a freighter from California, landing in Tahiti. From there he spent the next three years wandering and looking for waves. Eventually landing in Africa, one evening he arrived at Victoria Falls.

“I looked out the window, it’s 1 in the morning, there were a couple of fires and two or three little huts. Of course, no lights, nobody around, no buildings of any kind, just little huts,” Metz remembers.

It’s at this part in Metz’s story where serendipity steps in. His driver was bound for Cape Town, and rather than sit alone in the dark, he made his way to the coast.

Linking up with John Whitmore, widely considered to be the father of South African surfing, Metz ended up checking out a lonely spot called Cape Saint Francis. The waves weren’t anything spectacular, but he logged the information in his memory bank.

Returning back to California, another of Metz’s friends, filmmaker Bruce Brown, whose studio was based in Dana Point (in the building where French eatery Bonjour Café is today), was about to set out on an around-the-world movie project.

Metz casually suggested that Brown give Cape Saint Francis a check since most of the South African surf map had yet to be filled in at this time.

“If we had arrived in Victoria Falls in the middle of the day, I might have got out and stayed and not gone to Cape Town, and Mike (Hyson) and Robert (August) might not have scored perfect Cape Saint Francis in The Endless Summer,” Metz said with a smile. “It’s funny the way the ball bounces.”

Metz spent much of the ’60s living in Hawaii running the Hobie shop in Honolulu. He also launched Surfline Hawaii with Dave Rochlen, as well as opened other Hobie shops on both the West and East Coasts. And as mentioned, he also founded SHACC, along with Spencer Croul.