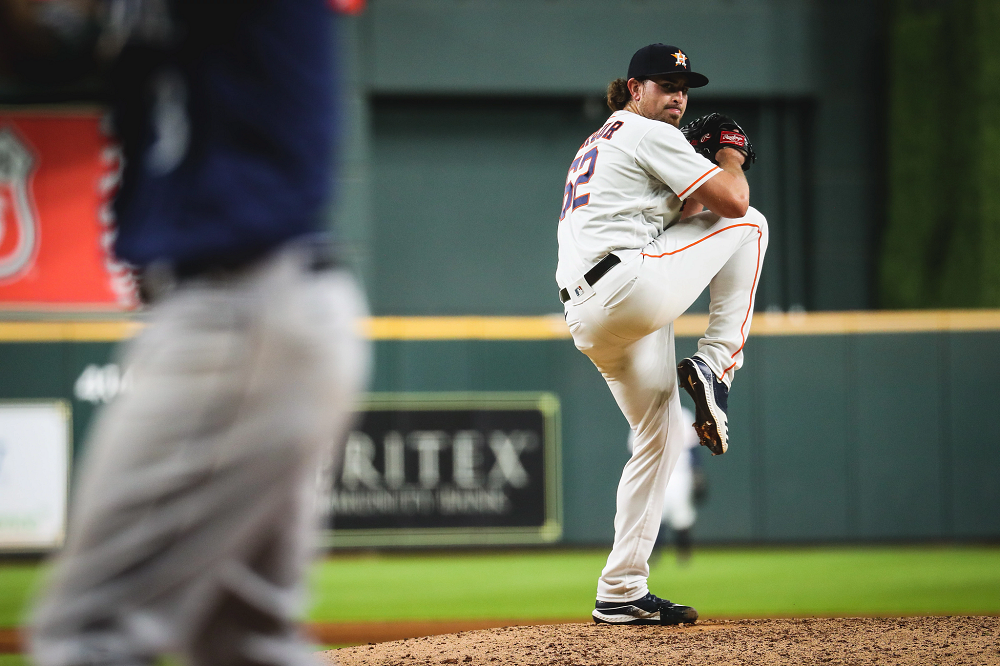 On the mound at Angel Stadium in Anaheim with the game on the line and the ball in his hands.

That’s where a young Blake Taylor imagined himself as a boy growing up in South Orange County.

And that’s where the 24-year-old Dana Hills alumnus found himself on Aug. 2, albeit wearing different colors than he had imagined. After seven years of toiling in the minor leagues with three different organizations, eight different teams and a Tommy John elbow surgery—and nine days after his major-league debut—the Houston Astros’ left-handed reliever was called in to pitch in the stadium where Taylor said he fell in love with the game of baseball.

“I can’t really put into words the feelings I felt,” Taylor said. “It was one of those moments, almost an out-of-body experience. I know that it was a huge situation to come into, but I just had to go in and give it your all.”

The Astros turned to Taylor with the game on the line.

With Houston already giving up the game-tying run earlier in the 10th inning, Taylor took the mound with two outs, the potential game-winning run on third base for the Angels and another runner on second. Not a problem, as Taylor caught Matt Thaiss looking on a full count with a 92-mph fastball low in the zone to end the inning on a called third strike.

Houston took the lead in the top of the 11th inning, and Taylor kept the ball with a chance to earn the win in the bottom of the inning. With MLB’s new extra-innings tiebreaking runner starting on second base, Taylor opened with a groundout and strikeout. Then he followed with an intentional walk and a four-pitch walk to load the bases.

After a coaching visit on the mound, Taylor locked it down with a flyout to earn his first major-league victory in the Astros’ 6-5 triumph.

“Holy cow, I can’t believe I just did that,” Taylor said of his reaction after the final out. “The look on young Blake’s face, I don’t know if he would’ve been mad at me or amazed at winning in Angel Stadium.”

It was a long road for Taylor to reach that Angel Stadium mound.

Taylor was born in Orange, and only a week later, his family moved to South Orange County. As soon as he was able, Taylor joined the North Mission Viejo Little League and played in that organization until high school. Taylor began at El Toro High School as a freshman and sophomore, but transferred to Dana Hills and graduated in 2013 as a Dolphin.

Taylor was drafted No. 51 overall by the Pittsburgh Pirates in the second round of the MLB Draft and began what would become a seven-year, eight-team, three-organization path to the major leagues.

“When I got drafted, I thought it was going to be fun, and travelling on planes, staying in hotels, and making money,” Taylor said, “but the minor leagues are hard. They hit you hard. The one thing I take from the minor leagues is the relationships you make with guys on those teams. It’s a journey that I wouldn’t change.”

Taylor played one season for the Pirates’ rookie ball team in Florida before being traded to the New York Mets organization, where he spent the 2014 season and start of the 2015 season on two different rookie ball teams in Florida and Tennessee. In that 2015 season, Taylor earned his first promotion to the short-season, A-ball Brooklyn Cyclones.

However, the promotion was short-lived. With Brooklyn, Taylor discovered he would need Tommy John surgery to repair his throwing elbow, which set him back for a full year. Taylor missed the end of the 2015 season and start of the 2016 season for rehab, and 372 days after his surgery, he returned to the mound, back in rookie ball in Tennessee.

In 2017, Taylor began his full-time push through the Mets organization. Taylor played the 2017 season with the Class-A Columbia Fireflies in South Carolina. In 2018, Taylor played the majority of the season with the Advanced-A St. Lucie Mets in Florida, but there was hope after making two appearances with a 2-0 record for the AAA Las Vegas 51s. In 2019, Taylor split the season with St. Lucie and the Double-A Binghamton Rumble Ponies in New York, but he only got one shot in AAA with the Syracuse Mets.

With his career continuing in the minor leagues, an arm surgery already on his ledger and only three games in AAA at that point, Taylor could have called it quits on any one of those 16-hour bus rides across the minors. However, Taylor never lost sight of his goal.

“Sometimes those thoughts crossed my mind, but I always tried to block them out,” Taylor said. “You can be happy with yourself because you gave your all; that’s all you can do. I didn’t want to stay up at night thinking, I didn’t work hard enough.”

Then in the winter of 2019, Taylor’s career took another turn and earned him another shot. Taylor was traded from the Mets to the Houston Astros, and he couldn’t wait for the new opportunity.

“Just the feeling of a team wanting you that’s been to the World Series and been an absolute monster, it was a great feeling,” Taylor said. “The Astros didn’t really have a left-hander, and to be wanted in a role they needed, it was one of the best feelings I ever had.”

But as if it needed another, Taylor’s career got one more unexpected turn. Just as Taylor was thriving in his first big-league spring training with no runs allowed in seven appearances, COVID-19 struck to shut down spring training and delay the regular season until July.

When MLB resumed with summer camps at each team’s home ballpark, Taylor was part of the preliminary group of 60 Astros players and prospects given a shot at making the big roster. Then, after all his years of work put in, Taylor got the call. He made the Astros major league roster. Taylor told MLB media he cried when he learned the news.

While 2020 has been hard on many people, it’s been a year of success for Taylor, who made his major-league debut in the Astros’ season-opener on July 24.

“It’s been the best several months of my life,” Taylor said. “It’s different, but it’s still the big leagues. It’s the same game you grew up playing—there’s just no fans, and you have to wear a mask when you’re not playing.”

As of Thursday, Aug. 13, Taylor had an impressive 1.80 ERA, with a 1-0 record and 10 strikeouts in 10 innings pitched. He’s been reliable for the Astros out of the bullpen, as he does all he can with the opportunity finally given to him in the strange days of 2020 Major League Baseball.

“I’m soaking up this time. It’s a unique time,” Taylor said. “I’ll get to tell my kids that it wasn’t always like that (with stadiums full of people). It’ll be a cool story to tell.”