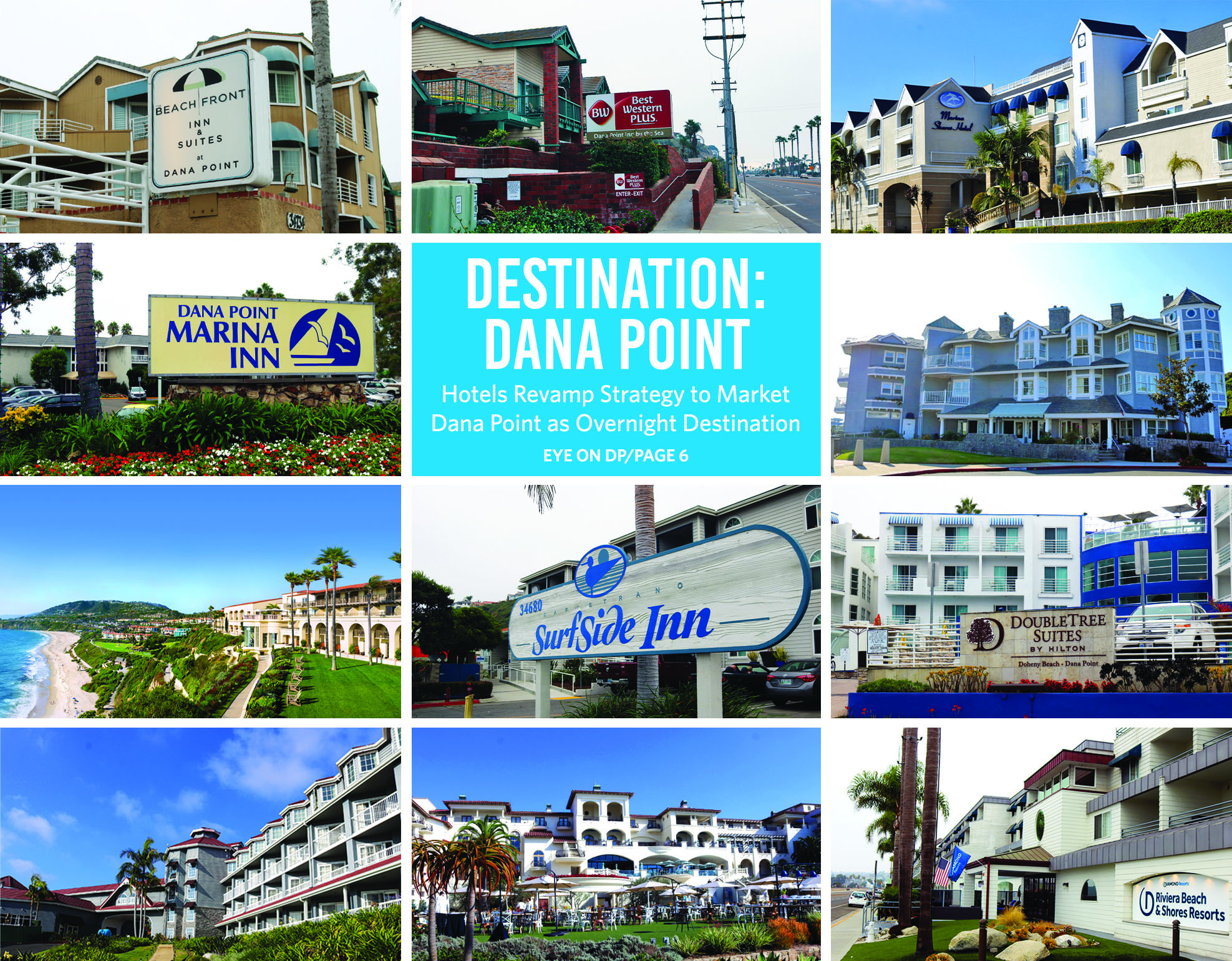 The four largest hotels in Dana Point are The Ritz-Carlton, Laguna Niguel; Monarch Beach Resort; DoubleTree Suites Doheny Beach; and Laguna Cliffs Marriott Resort & Spa—and you may have noticed that none of these hotels has Dana Point in the name.

With the newly approved and expanded Dana Point Tourism Business Improvement District, these four resorts are now joined by seven other Dana Point hotels to contribute assessments to fund more emboldened marketing strategies. The common goal set for the 11 hotels in the district will be to put Dana Point on the map as an overnight destination.

“This opportunity will allow hotels to come together, strategize, and put our resources toward improving our marketability,” said Visit Dana Point President Jonny Westom. “This, in turn, benefits the community and the City of Dana Point.”

There are surrounding TBIDs established in Anaheim, Carlsbad, Costa Mesa, Huntington Beach, Laguna Beach, Newport Beach and Oceanside. Westom says that with such a competitive market in the tourism industry, it’s imperative to have a proactive marketing strategy.

Visit Dana Point will serve as the DPTBID’s Owners’ Association and is in charge of managing funds and implementing programs in accordance with goals set by participating hotels. VDP will also present annual reports to city council.

Currently, the VDP Board of Directors ranges from five to seven directors, with four designated spots represented by the aforementioned four largest hotels. However, Westom says that VDP will be forming a TBID committee with an invitation to the smaller-scale hotels included in the TBID.

The DPTBID will have a five-year term beginning July 1, 2020—which will be when assessments begin—and continue through June 30, 2025.

Westom says this will allow the TBID hotels to plan for tradeshows and business opportunities in the long term—a major advantage and key difference compared to the last TBID formed.

A previous TBID that had been formed in 2008 pursuant to the Business Area Law of 1989 was formed by the four large hotels to collectively market Dana Point as a destination.

City council affirmed creation of the tourism business district, as a public-private partnership, in 2009. That TBID began collecting a $3 per room, per night assessment in 2010 to collectively brand and promote Dana Point, which included advertising, public relations and marketing

The city was and will be responsible for collecting the assessments on behalf of the TBID and redistributing them to Visit Dana Point.

The local tourism industry is the engine to the city’s revenue, and successful marketing would reinforce and add to that, Westom says. For the Fiscal Year 2018-2019 ending on June 30, tourism revenues added up to more than $13 million.

According to the city, the seven smaller hotels added to the TBID contributed about $1.2 million in TOT in the fiscal year ended June 30, 2019.

“TBID strategies continue to support increased transient occupancy tax (TOT) revenue since the recession and have directly boosted revenues to both the resorts and the city,” Westom said.

Bruce Brainerd has been the general manager for The Ritz-Carlton, Laguna Niguel for more than 10 years. He served on the former TBID’s advisory board and says he looks forward to an expanded TBID that includes smaller hotels in Dana Point.

“By collaborating on the marketing together, we all share a single voice in how we position the destination, and we’re able to push our creativity in finding ways to put Dana Point on the map,” Brainerd said. “The TBID benefits us, other hotels and the community by raising awareness of the destination, along with attracting group business and overnight visitors to Dana Point. All of this helps builds our economy and, in return, creates a better well-being for our city.”

The DPTBID, however, was not immediately applauded unanimously by all hotels within the district. On Sept. 24, Robert Jackson, the owner of Best Western Plus Marina Shores Hotel in Dana Point, submitted a letter to city council in opposition of the TBID.

The letter asserted that the TBID favors the four big hotels in the sense that they control 74.17% of the rooms that will be assessed.

“The proposal allows for the city to approve the DPTBID unless owners of 50% or more of the assessed units object. This clearly favors the four hotels who are currently running and will continue to run the Visit Dana Point Group,” the letter stated.

The $3- and $5-per-room night is disproportionate when compared to the average daily rates at the various hotels, Jackson wrote.

Jackson, in closing, wrote that he believes the city could promote itself much better since there is so much to offer tourists and overnight business guests. Neither Jackson, nor anyone representing Best Western Plus Marina Shores Hotel, responded to multiple requests for additional comment from Dana Point Times.

Westom says there have been conversations with Best Western Plus Marina Shores Hotel to address Jackson’s concerns.

“In good faith, the four big hotels have the increased assessment,” Westom said. “We want all hotels to benefit from this leisure campaign. Our marketing is going to focus on all the hotels in the district so that each hotel sees the rewards of this TBID.”

Kelly Reenders, the economic development manager for the city of Dana Point, says the TBID has helped create awareness for Dana Point—and not just for conferences and group business, but for leisure travel, as well.

“It’s exciting to see commercials for Visit Dana Point on KTLA, and see how destination awareness is being leveraged through social media influencers and travel writers,” Reenders said. “These marketing efforts serve to strengthen our local economy and create revenue that can be invested back into the community.”

Westom says that starting in January 2020, committee meetings will begin to develop a sales and marketing plan for the upcoming fiscal year. The DPTBID assessment will be implemented in July 2020 for all 11 properties.

“That’s six months of a ramp-up time to welcome the new hotels, get to know each other, learn from each other and set goals to have a strong and united kick-start for this TBID,” Westom said.