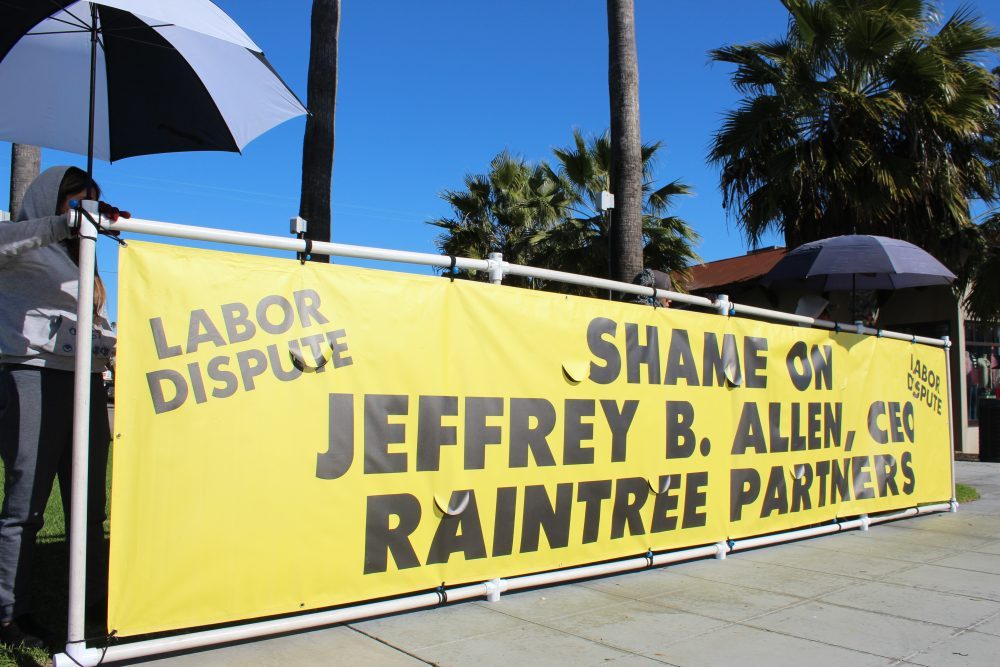 Three demonstrators were seen on Wednesday, Feb. 6 holding up a sign that read “Shame on Jeffrey B. Allen, CEO Raintree Partners,” near La Plaza Park in Dana Point.

Lupe Mercado, one of the demonstrators, says she’s been employed by Raintree for ten years. She says the dispute and the sign demonstration has been ongoing for about three weeks.

“Raintree Partners has confirmed that Mercado is not one their employees and, in fact, has never been an employee for their firm,” a spokesperson for Raintree Partners said, following publication of this article.

According to a flier provided by Mercado, contracted workers accuse Raintree Partners of “contributing to erosion of area standards for carpenter craft workers. Fullerton Pacific is performing work on the Prado mix use project located at 34135 Pacific Coast Highway, Dana Point, Ca. Fullerton Pacific does not meet area labor standards for all their carpenter craft workers, including fully paying health benefits and pension.”

The flier goes on to say that the union believes that Jeffrey B. Allen has an obligation to the community to see that area labor standards are met for construction work.

“They should not be allowed to insulate themselves behind ‘independent’ contractors. For this reason the union has a labor dispute…” the flier says.

Mercado provided contact information for a union representative, but the contact did not respond to Dana Point Times’ inquiries before press time.

Jason Check is the Managing Director for Raintree Partners and has an office near La Plaza Park, where the demonstrators held their sign. He says the dispute does not involve his firm directly—rather, it is between a subcontractor employed by the project’s general contractor and Carpenters Local 714.

“Our firm supports and upholds all labor laws,” said Check. “With regard to its impact on our development, the timing of delivering Prado West to the Dana Point community is still very much on track. We are excited to bring a new walkable destination for local shops and dining, as well as new residences to downtown Dana Point.”

Check says he remains committed to seek projects that will benefit everyone who lives in Dana Point.

For updates on the dispute, check www.danapointtimes.com.