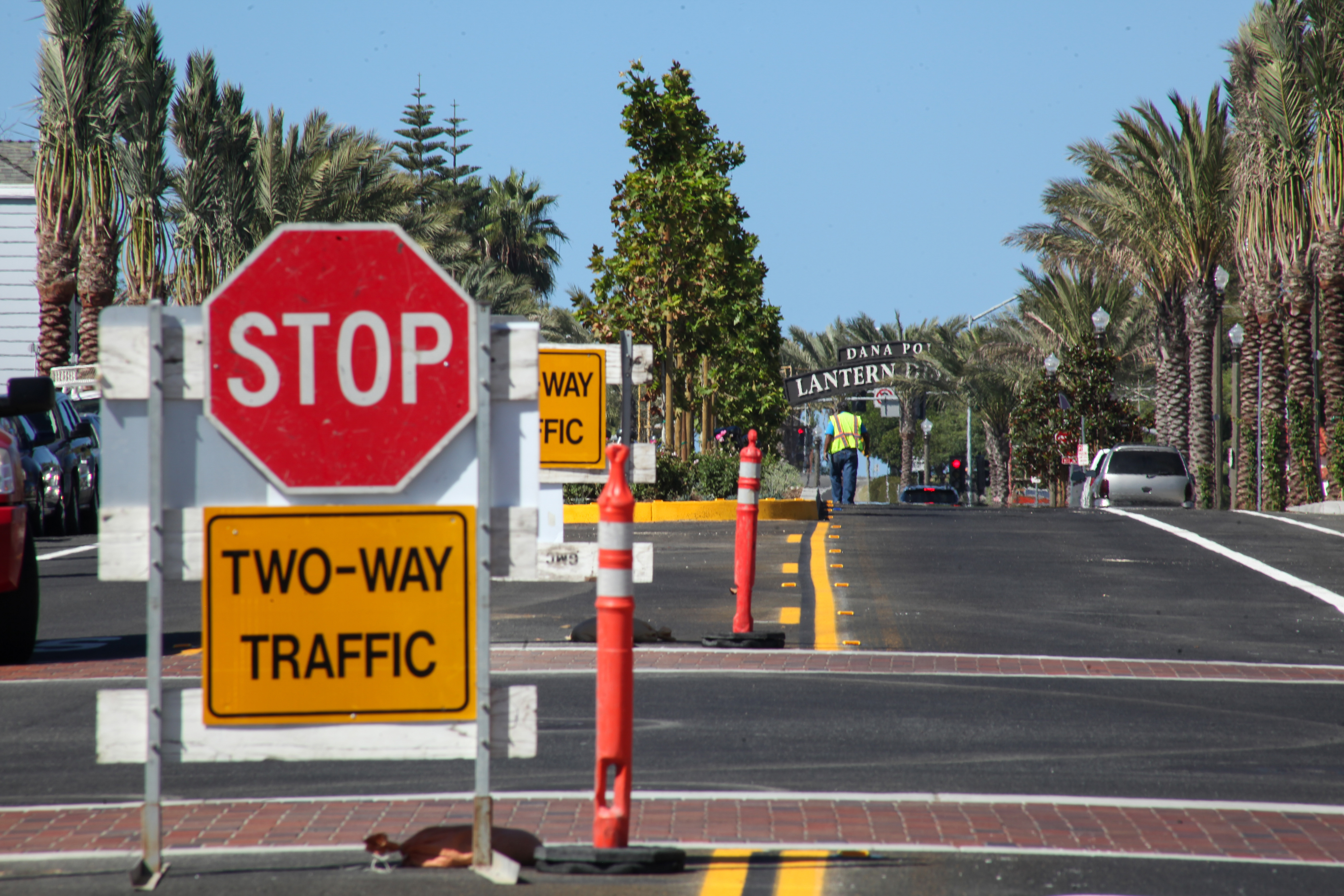 Del Prado Avenue was opened to two-way traffic on Tuesday, a milestone for the Lantern District

The opening began at 7 a.m. with crews working downcoast from Ruby Lantern, and was complete by 2 p.m., one hour ahead of plan, said Brad Fowler, director of the city’s Public Works and Engineering department.

The opening, he said, will make area destinations much easier to reach, since there are now no one-way streets with which to contend.

“We expect to see more vehicular traffic on Del Prado and less on PCH,” Fowler said. “It will, however, take a few months for everyone to avail themselves of the new options such as how to get to the post office easiest.”

For that reason, Matt Sinacori, city engineer, said the temporary road signs, with arrows depicting two-way traffic, as well as additional temporary stop signs, will remain in place for a week—or two if needed—in order to help motorists navigate the change.

The Lantern District project, as a whole, remains on time and within budget, Fowler added.

“We are working on the punch list and “frosting” items now in October,” he said.  “The Lantern District entry at Copper Lantern was installed Wednesday.  And we have some signage and chairs still to install, as well as finishing the exterior murals on the northern west entryway and the banner pole installation.”

The opening brings a feeling of relief to many Del Prado business owners who have had to endure a disruption in their business due to the road construction, said Cindy Monroe, owner of Luxe Restaurant & Martini Bar, located at the corner of Del Prado and Street of the Violet Lantern.

“I’m elated with the improvements on Del Prado and super excited that it is finally a two-way street,” Monroe said. “The city did a fabulous job carrying out the vision for the area and feedback from my local patrons is very positive. We are looking forward to returning to ‘business as normal’ and to an increase in business anticipated in the future.”

Although the street’s two-way opening will bring an obvious and immediate increase in visitors to Del Prado businesses, Monroe said she is concerned by the opposition of the group called Dana Point Residents for Responsible Development opposing the Lantern District Plan parking program changes approved Sept. 15 by City Council and responsible for the “Save Dana Point” movement and signs.

“My only fear is that people do not realize that if the ‘Save Dana Point’ group has their way, the Lantern District plan will never fully come to fruition,” Monroe said. “Their proposed parking stipulations would make it impossible for investors to afford to build on commercial lots and they will remain undeveloped. I’m hoping people really do their homework when they profess to support ‘Save Dana Point.’”

The group, on Sept. 15, submitted more than 4,200 signatures to the city for verification, for their “2015 Town Center Initiative” which opposes City Council’s spending for infrastructure improvements to the area, the density of apartments and condos in the plan and the reduction of parking requirements.

The parking program changes, following extensive study by consultant firm Nelson Nygaard, were found necessary to the future success of the Lantern District Plan at attracting new businesses. The old requirements were inherited from the county before the city was incorporated, and no longer fit the needs of the area, city planning staff has maintained.

Heather Johnston, executive director of the Dana Point Chamber of Commerce, and her staff began sharing the news via email blasts.

“Vickie (Vickie McMurchie, chamber senior operations manager) and I were allowed to be the first car down Del Prado when the street opened,” said Johnston in a Tuesday email blast.  “So exciting.  Do yourself a favor and take a trip down Del Prado. It looks beautiful.”

As part of the chamber’s efforts to get the word out and help local businesses attract customers back into the district, they are encouraging business owners to run TGIO (Thank Goodness It’s Open) specials, and vow to help with marketing such efforts. The chamber has also provided businesses with graphics to include in the businesses’ own email and print campaigns.

Events are already being planned to take advantage of the now pedestrian-friendly street.

The first planned event, so far, is the Del Prado Art Walk, set for Saturday, Oct. 17, from 1 p.m. to 4 p.m. The Art Walk is being planned by the Dana Point Arts and Cultural Commission in conjunction with Jack’s Restaurant and will include artwork by more than 40 artists, live music and special offers from Del Prado businesses.