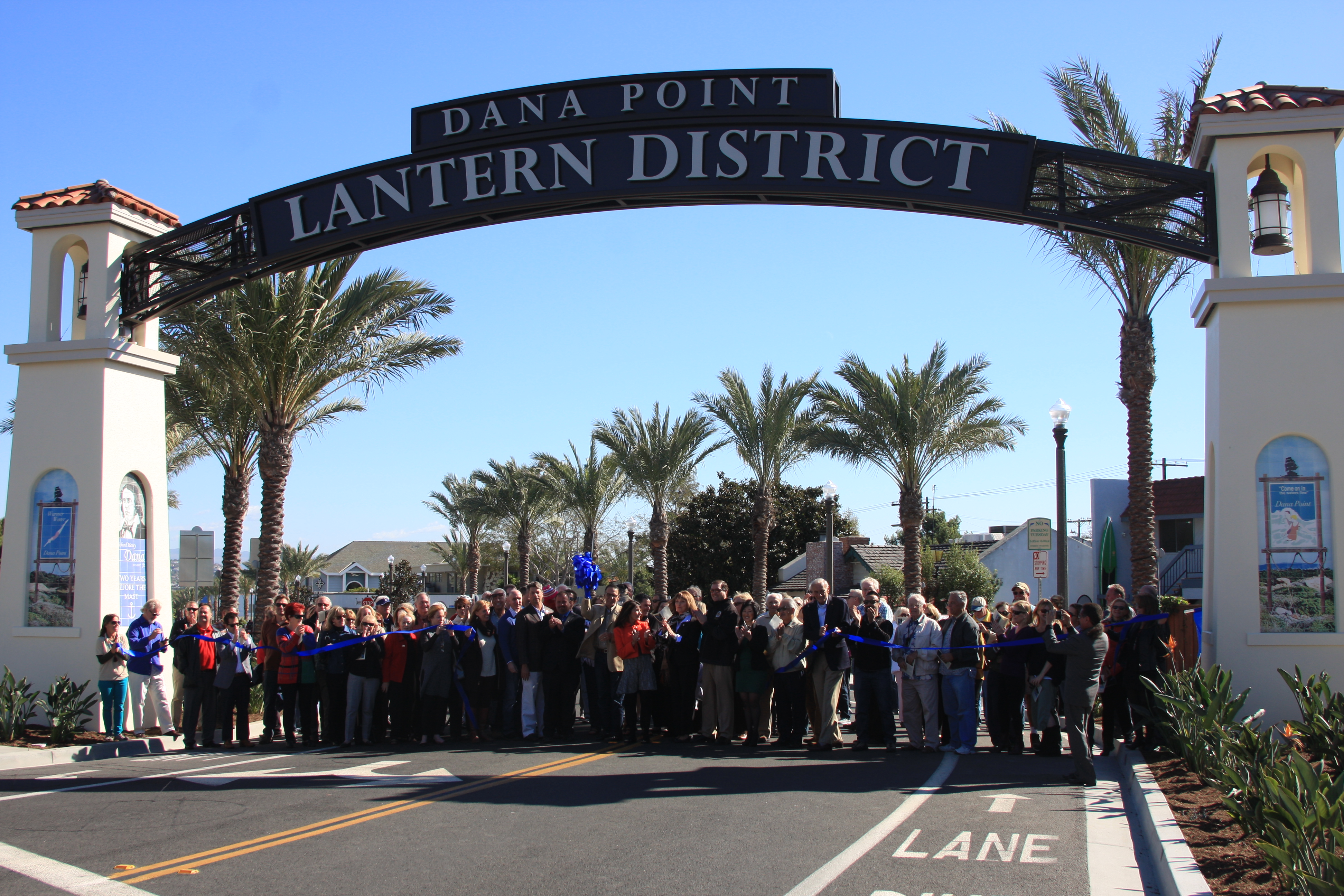 The city of Dana Point commemorated an important milestone in its long-awaited Town Center Plan revitalization project on Monday with an official ribbon cutting at the recently-completed upcoast Lantern District gateway.

“This is truly a momentous occasion,” Mayor Carlos N. Olvera said at the ceremony. “The idea of having such a destination in Dana Point has three failed attempts. And this one took at least 20 years of planning, with a lot of public input, city residents’ input, to get what we wanted here. The last time we had a ribbon cutting on this street was some 86 years ago, when the Governor of the state of California came here to open up the newly-paved Pacific Coast Highway.”

Brough, who was a member of City Council in 2013 and 2014, called the occasion truly memorable, as the project was of central focus during half of his term.

“I just want to give credit to the folks who came before me … since incorporation,” Brough said. “The vision that everyone worked hard for has come to fruition and I think it’s a beautiful project. There are a few people I particularly want to give credit to. Carlos Olvera was key in this process. Also Steven Weinberg deserves a great amount of credit for getting this project going, as well as Wayne Rayfield on the water district side. They were our partner in this and we couldn’t have done it without them; Brad Fowler, for going back and sharpening his pencil when this thing was ready to go; Matt Sinacori, out there daily … as businesses had questions. Matt was really the face of the city during these two years and he did a tremendous job.”

Their names, along with the names of the current City Council members, city staff, consultants and contractors on the project are emblazoned on a brass plaque affixed to a Lantern District dedication monument unveiled as part of Monday’s event.

Attendees were serenaded by children from the Broderick Montessori School, located just steps from the Del Prado archway, who came outside to sing patriotic tunes for the occasion.

After the conclusion of the ceremony, attendees posed for photos and moved in for a closer look at the artwork and photographs making up the historic tile murals installed on the archway supports as well as a monument sign explaining the historical significance of each image.

The idea of revamping Dana Point’s downtown area dates back to the 1990s with the idea of creating a more business- and pedestrian-friendly environment and promoting new development while maintaining the city’s small seaside community identity.

In 2004, the city hired San Francisco-based ROMA Design Group to begin work on a design for Town Center improvements, and a Town Center Subcommittee was formed in 2005 to work collaboratively to create the Town Center Plan (renamed Lantern District Plan) providing guidelines for the eventual project.

In 2006, City Council approved plans for the project and the California Coastal Commission gave it the thumbs-up in 2008. Unfortunately, the timing coincided with the recession and the plan was postponed.

But the plan did not sit idle for long. Reignited in 2013 by a coalition of residents, the South Coast Water District, City Council and city staff, construction to replace aging infrastructure in the area and improve the streetscapes began.

The project’s first phase was built from February through November 2014, followed by phase two from February to November of this year, with the final product coming in below the $20 million budget, according to city officials.

On Nov. 3, City Council certified the Town Center Initiative, a petition for changes to the Town Center Plan signed by more than 4,000 residents who feel the city’s actions with regard to the plan are running contrary to its original intent and favor developers over residents.

At its Dec. 1 meeting, after reviewing a staff report detailing the changes proposed in the initiative, City Council will vote whether to adopt the initiative or set it for special election, a move that could cost an estimated $109,272 to $120,597.

With several development permits either in process or approved, the district has entered into a phase of construction of private developments, with two new restaurants close to completion near the Del Prado archway.

Two other approved projects, a BevMo! store at the district’s downcoast entrance and the Majestic Project, a mixed-use development, with 109 residential units and 32,500 square feet of retail, are the subjects of much of the controversy leading to the initiative.