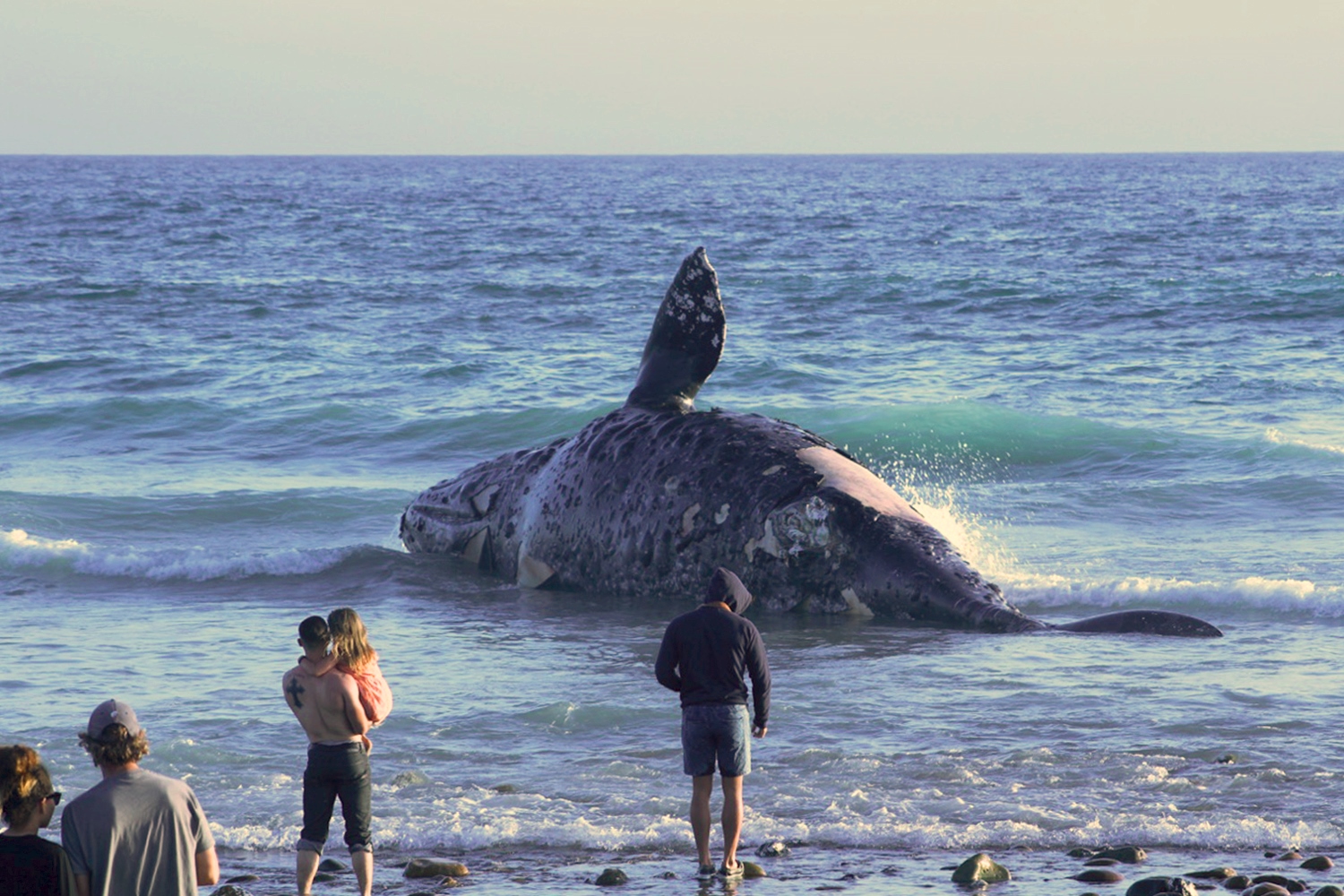 Surfers and other beachgoers got a smelly reminder of the morbid part of the circle of life when the body of a dead whale washed up on the beach at Lower Trestles in San Onofre State Park on Sunday. By Wednesday evening, California State Parks had finalized an agreement with a contractor to remove the carcass in pieces and move it by truck to the landfill, and work was scheduled to start on Thursday.

The California gray whale, estimated to be more than 40 feet in length, had been spotted a few days before landing on the beach by Dana Point fishing and whale watching boat captains.

According to Dana Wharf Sportfishing & Whale Watching general manager Donna Kalez, boat captains first spotted the whale on Friday, found no obvious sign of injuries to the body and reported it to the National Oceanic and Atmospheric Administration as a death most likely the result of natural causes. Captains also reported spotting the body of a second dead gray whale floating just off the coast of San Clemente and Dana Point in the past few days and said they expected it to also wash up soon in the area.

On Monday, Rich Haydon, South Sector superintendent of California State Parks’ Orange Coast District, said State Parks had begun the process of deciding on the method to be used for the removal of the carcass.

“Best practice includes three options—burial in place, towing it out to sea or a land-based removal,” Haydon said. “We have pretty much ruled out a burial in place, since the area is full of cobblestones and there is not a lot of beach area. Ocean burial can be problematic with a carcass as decomposed as this one is, due to the likelihood of it rupturing and falling apart, and land-based removal is governed by the size and type of heavy equipment we can get onto the beach.”

The size of the animal would require its body to be parted into smaller sections to be trucked out for land-based removal and larger equipment than State Parks has would need to be brought in for the job.

“There’s really no easy solution here,” Haydon said. “Our boat is not strong enough to tow it off the beach, the high tides have not been sufficient to get enough water under it to float it and our heavy equipment is not large enough to lift it.”

An additional kink in the possibility of towing the whale out for burial at sea was wind predicted to pick up to 25 knots or more by Monday evening.

At 1:30 p.m. Monday NOAA scientists arrived on scene to take samples from the animal and the whale was released to State Parks for removal shortly thereafter.

Entrails, believed most likely from the second whale, began showing up along local beaches on Monday, the bulk of the material landing in San Clemente, between the Pier/T Street area and Riviera Beach.

“We have it on good authority that the second whale has broken into two pieces and is floating (just off the coast of San Clemente) out near Seal Rock,” Haydon said. “The city (of San Clemente) followed the traditional best practice used for decades—burying the washed up entrails in place.”

Despite numerous attempts, San Clemente city officials could not be reached for comment.

Tuesday evening, with burial in place not being an option at Lowers for the first whale and the window allowing for successful water burial closed, Haydon said the decision to remove the whale by truck was essentially the only viable option. State Parks would have liked to have been able to lift it whole and remove it all at once, he said, but the weight, inaccessibility of the location and state of decomposition has made it impossible. The body is too heavy for a crane or other equipment that could fit under the bridge to access the beach.

“We are in contact with a contractor NOAA has used in the past and working on an emergency contract to get it done,” Haydon said on Tuesday at 5 p.m. “This is not going to be pretty. Even if we could get heavy enough equipment in to lift it whole, it would most likely rupture and make a huge mess on the beach. We will dismember it on site, load it into lined dump trucks and haul it to the landfill. It’s not going to be pretty but that’s the best we can do, other than leaving it as it is. We are asking people to stay out of the area at this time.”

By Wednesday afternoon a contract had been signed and the dirty job of cutting up the carcass and trucking it off the beach was set to begin Thursday morning. Haydon said it was unknown how long the entire process would take.