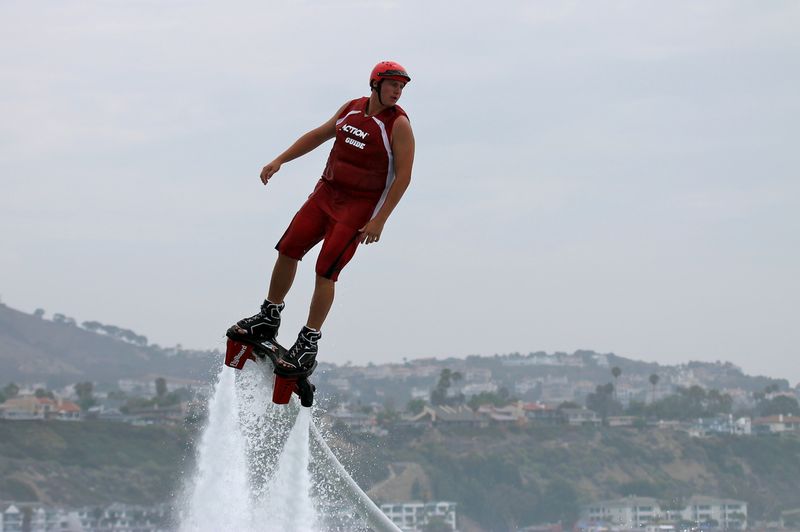 The weight of the flyboard contraption strapped to your feet feels like it should keep you in the water, not raise you up above it.

That’s what I was telling myself as I sat floating just outside the Dana Point Harbor with the Action Aqua Flight team. They were there to show me how to flyboard, a watersport activity that has become a bit of an internet sensation in recent months.

The company, that made a name for itself running flyboarding trips and other outdoor activities in Big Bear, migrated to the coast and has been operating out of the Harbor since early July.

Flyboarding essentially involves being strapped to a snowboard-wakeboard hybrid platform connected to what looks like a fire hose, which is hooked up to a WaveRunner. The personal watercraft has been customized so when the throttle is revved, it doesn’t move. Instead the power and water goes straight to the hose, shooting you in whatever direction your body is pointed in. I know, it sounds like a vehicle your crazy uncle made up in his garage one night but it is all legitimate with Action Aqua Flight.

Before I jumped into the water, Action Aqua Flight manager Dillon Bain put on a display for us. With assistant Ternel Enriguez manning the watercraft, Bain shot up out of the water and began floating around with ease. He started by hovering just inches above the ocean but soon took it higher and higher, doing spins and executing sharp turns roughly 15 feet in the air.

I recalled his maneuvers as I was floating around, about to make my first ascent. My goal was to immediately shoot up, do a few twists and turns and glide around like a pro. Then the engine roared.

My first try did not go as planned. I made it just above the water before I did a face plant straight back to where I came from. I suddenly had a new goal—just get above the water.

Bain and Enriguez were telling me beforehand that my body needed to be in a straight, plank-like position in order to get up in the air. Speaking to the soft, comic book-nerd section of my heart, they said to try and picture yourself looking like Iron Man, with your legs locked and your hands at your sides.

From there, it’s a lot like snowboarding in that your ankles determine where you go. With that in mind, I gave the high sign for the throttle to open up again. I shot up out of the water and actually floated for a good while. Mission accomplished.

“It’s a lot easier than snowboarding and it usually only takes five minutes for people to get the hang of it,” Bain said with a smile.

After a few tries I was doing OK and getting higher and higher in the air. I wasn’t doing moves in the air like I thought I would, but I’m guessing with a few more hours of practice under my belt I would be able to do some kind of trick.

My favorite part of the trip came during one of my last attempts. I was looking straight out at the ocean and got a great view of the horizon and boats out in the distance as I floated, looking like an amphibious Iron Man. It was a great moment.

Next time you’re at the Harbor, take a look out past the surf zone, where you may just catch a glimpse of Action Aqua Flight teaching people to fly.