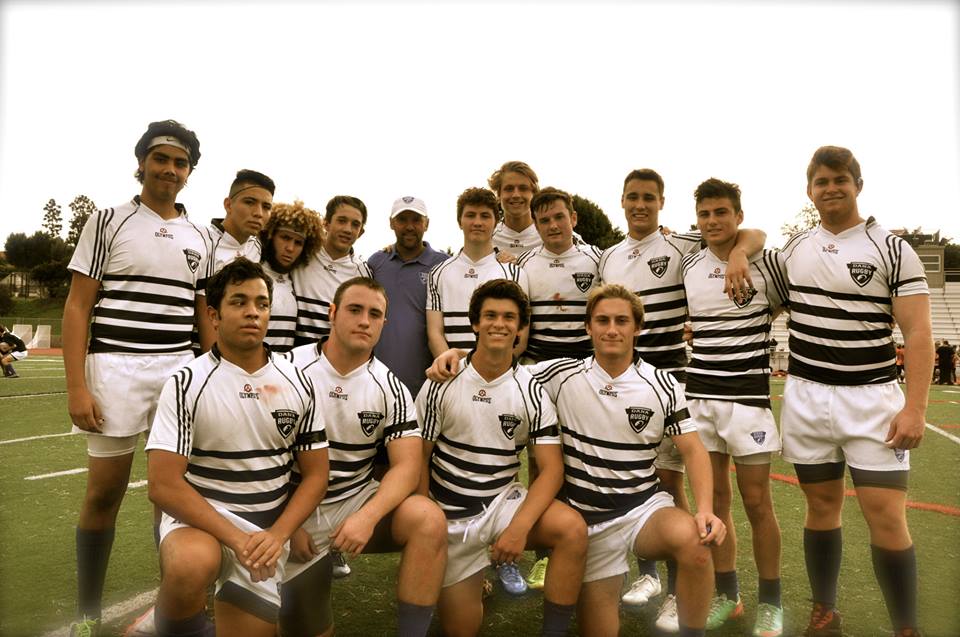 Dana Rugby Club on the Rise

The Dana Rugby Club’s Dec. 12 match against Mira Costa was just the second game on the schedule for both teams. The 2015 Southern California Youth Rugby high school white division season had just got underway and teams were beginning to find their identities. While remaining atop the standings is always important, the playoffs were still over one month away. A slipup here would not derail an entire season that lay ahead.

But for the Dana Rugby Club, that game meant a lot.

Last season, playing in the league’s developmental blue division, Dana Rugby Club and Mira Costa squared off in the division’s championship match. Mira Costa, an established program with several strong players, was able to outmuscle Dana, playing in their inaugural season, and claim the title.

In 2014, both teams were promoted to the league’s white division, which requires schools have 70 percent of team members hail from a home school which, for Dana Rugby, is Dana Hills High School.

In the rematch on Dec. 12, Dana Rugby proved that they had come a long way since last year’s successful season by defeating Mira Costa 35-12.

The winning did not stop there. Dana Rugby is currently 4-0 on the season and remains the only unbeaten team in league. They will look for a fifth straight win this Saturday when they host Stern MASS of Los Angeles at Shorecliffs Middle School in San Clemente at 10 a.m.

“We ended up playing (Mira Costa) and we were able to beat them this year,” Dana Hills senior and team co-founder Drew Falk said. “It was great to get them back and hopefully we can get back in the final for this division and bring home a trophy.”

The Dolphins had the skill and athleticism to win games last season, but lacked the big bodies up front to win a championship. The Dana veteran leadership focused on attracting football players, especially linemen, to join the team.

After student-run presentations were made and word of mouth spread on campus, not only did the football players join up, dozens of players from Dana Hills, Trabuco Hills, San Clemente and San Juan Capistrano high schools signed up for the team. In the span of one year Dana Rugby has nearly doubled in size. The roster now boasts 40 players and even has a developmental squad of their own, which is similar to junior varsity.

The big bodied forwards up front have meshed to allow the Dana skill players, such as Falk, senior Gabe Wahl, and All-American junior fly-half Anton Grigoriou to make an impact. Dana Rugby has outscored their opponents by a combined 134-46 margin this season.

The bigger players have helped, but so has the Dana Rugby Club’s new training regimen and game strategy that came with assistant coach Craig Hartley, a former USA National Team captain and coach.

Hartley instilled a demanding workout plan for the team members, which has boosted the level of play, especially late in games.

“I really hammered these guys. This summer, we were at the stairs every Monday and this season, they’ve been doing bleachers and all kinds of stuff they’ve never done before,” Hartley said. “They’re reaping the rewards in the second half of games. We’re shutting teams out in the second half of the game and that’s based on fitness. Our guys are sitting there ready to go for more while the other teams are bent over on their knees. It’s a noticeable difference.”

Following the match against Stern MASS, the team will play St. John Bosco to wrap up league play. If Dana Rugby wins out, they will enter the playoffs as the top seed.

Preparing for the Future

High school rugby has been growing in popularity across Southern California. Although there have been dozens of programs sprouting up in San Diego and Los Angeles counties, Orange County remains a relatively uncharted space.

Team board member Keith Falk, Hartley and team President Laurence Wahl are hoping rugby in Orange County will take on a life of its own and, eventually, become a sanctioned high school sport, much like the sport of lacrosse did several years ago.

Wahl and Falk said there were major roadblocks and district red tape to navigate before Dana Rugby’s creation. But after learning the ropes and following the proper channels, they have made strides. In a mini landmark victory earlier this year, Dana Rugby Club got to play under the lights at Dana Hills High School for the first time.

The team parents and coaches believe rugby can not only serve as a vehicle for student-athletes looking to excel in a new sport, it can even go so far as earning a player a ticket to college.

“Some might not have the opportunity to play, say, football in college, but they can play rugby. Just about every major and small college in the United States has a rugby program and they can be a part of that,” Hartley said.

Wahl cited several instances when players, struggling with grades in school, righted the ship and improved their grade-point average to the required minimum needed to be on the team.

The Dana Rugby Club has taken plans to safeguard against the club folding up after only two years, Falk said. A parent-run board has been named, which includes a line of succession to insure there will always be leadership.

On the student side, Drew Falk said the team has made it a priority to recruit younger players.

“It’s great having it grow. Our whole goal wasn’t just to create a team while we were here. We wanted to keep it going throughout after we graduate and see this become a big powerhouse program,” Drew Falk said.