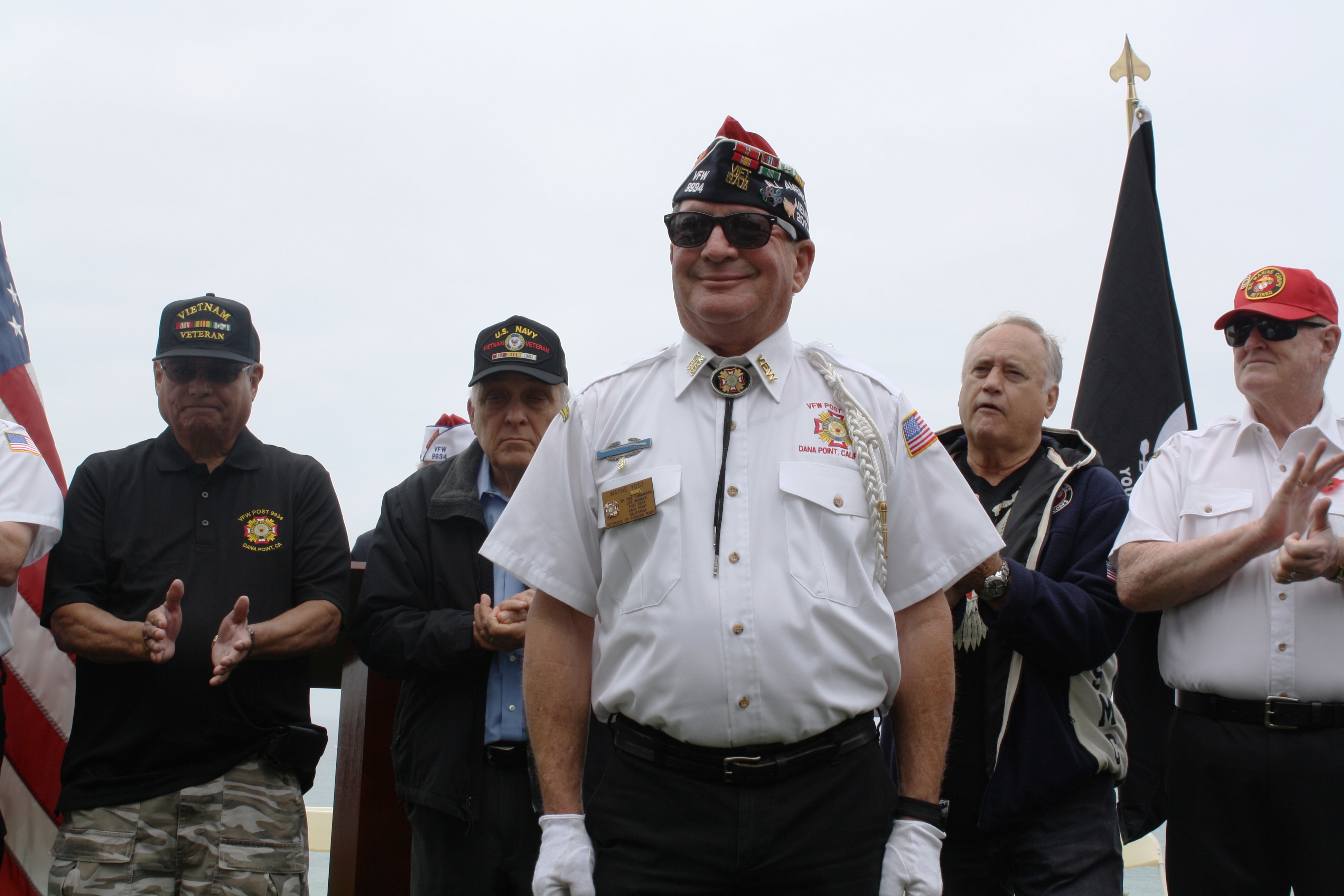 With the Pacific Ocean as a backdrop, more than 40 Vietnam War veterans stood proudly waiting for their name to be called during Dana Point’s annual Memorial Day service on Monday morning at Pines Park.

The veterans stood shoulder to shoulder, with American flags blowing all around them, had their names called and a pin given to them by members of the city, while family members and Dana Point residents cheered and clapped.

The annual event, which had a special dedication for Vietnam veterans, marked the 50th anniversary of the Vietnam War.

“Today, we honor those who have fallen in the defense of our country,” said Dana Point Mayor John Tomlinson.

In the audience, filling every seat, hundreds of residents and family members waved American flags, had Buddy Poppies pinned to them, and clapped as veterans from the Vietnam War, World War II and also those who served in Iraq, Afghanistan and the Gulf, stood to be recognized.

Cmdr. William C. Manes, U.S. Navy, was this year’s master of ceremonies and led the service, which included speakers, the presentation of colors and a gun salute.

“Sacrifice is meaningless without remembrance,” Manes said. “Whether done individually or collectively, it’s the thought that counts.”

The keynote speaker, Col. Michael J. Borgshulte, United States Marine Corp., told the audience he was honored to be the speaker for a second time.

Borgshulte has served in Okinawa as well as in Iraq and Afghanistan and has been awarded the Bronze Star Medal, the Defense Meritorious Service Medal, and multiple Strike/Flight Air Medals.

“We should do this and honor our warriors every year and not just on this day but every day,” Borgshulte said.

Borgshulte was the city’s speaker six years ago after he returned from a tour, and told the crowd about the Marine Corp.’s Core Values, challenging everyone to follow those beliefs.

The service also included the presentation of colors by the Marine Aircraft Group 39 from Camp Pendleton and VFW Post 9934 Color Guard, TAPS by David Longoria, and the invocation as well as the benediction by Col. Tyler S. Guy, Chaplain, U.S. Air Force and senior pastor at South Shores Church.

During the roll call, fallen soldiers’ names were called, and a bell was rung after a member in the audience yelled “no response.” Dog tags and flowers were placed below a helmet and combat boots for each of those members.

“This is one small way we can honor those who have made the ultimate sacrifice so that we could have freedom today,” said Phil Jimenez, commander of Dana Point VFW Post 9934.