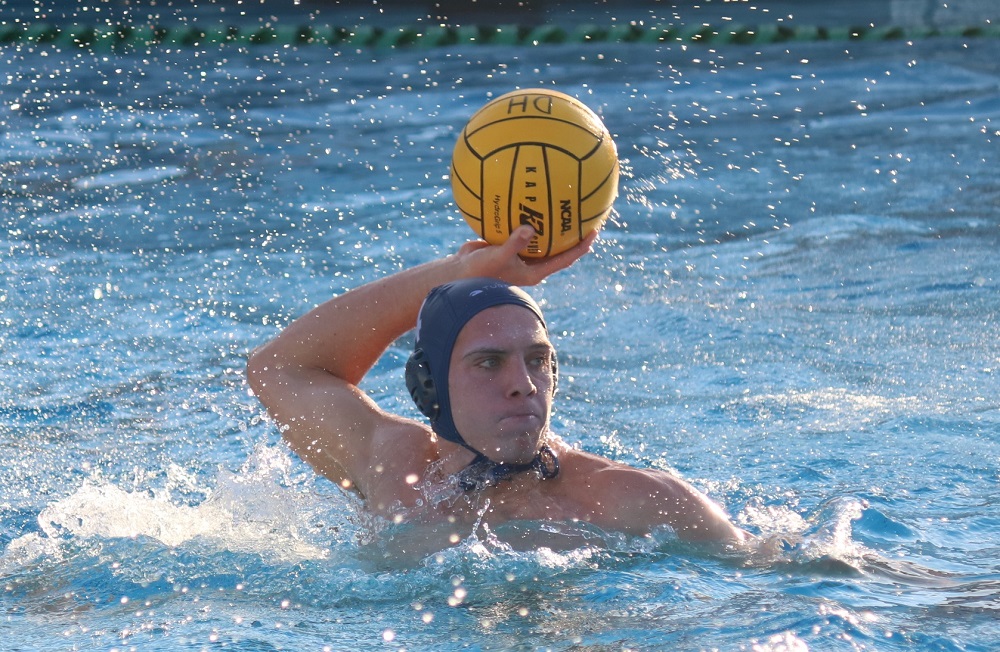 Dana Hills senior Kaden Likins could be spotted as a water polo player from a mile away.

He’s got the bleached-blonde hair from many hours in the sun and chlorinated pool water. He’s got the triangle-shaped body with the strong upper body from more hours spent treading water and winding up for his blistering shot on goal. The water polo player “look” is one earned with plenty of training.

For his efforts and accomplishments, Kaden Likins has been chosen as the Dana Point Times’ Boys Athlete of the Year.

When the Dolphins took to the pool, the ball went through Likins, offensively. Likins would take the ball nearly every possession and had two options.

He could either take the shot if the defense somehow slept on him or if he had an angle, or he could draw the defense to him—his skill always made him a threat—and pass it off to a teammate for a better opportunity. Likins was also the go-to penalty shot-taker for Dana Hills.

It worked very well for the Dolphins, who posted an 18-12 record overall and took a strong second place in the South Coast League at 6-2. In the CIF-SS Division 2 playoffs, Dana Hills was the No. 2 seed and had to battle.

Despite the seeding, Dana Hills had to play a wild-card match. Dana Hills went on the road in the first round and pulled out a one-goal win, 9-8, over Los Alamitos. In the quarterfinals, the Dolphins grinded out another one-goal win, 5-4, over Damien. Dana Hills advanced to the third CIF-SS semifinal in school history, but lost another tight match, 8-6, against Mira Costa.

Likins now moves on to play his college career at UC San Diego.

“I’m excited to spend the next four years at UC San Diego,” Likins said at Dana Hills’ Signing Day ceremony. “I’m looking forward to it. Another four years of playing the sport, both athletics and academics, to succeed and do my best.”

Off the field, Likins could often be seen as a prominent member of the “Pod Squad.” Likins was front and center in the Dana Hills student section, loudly lending his support in playoff runs for the Dolphins basketball, volleyball and girls water polo teams.