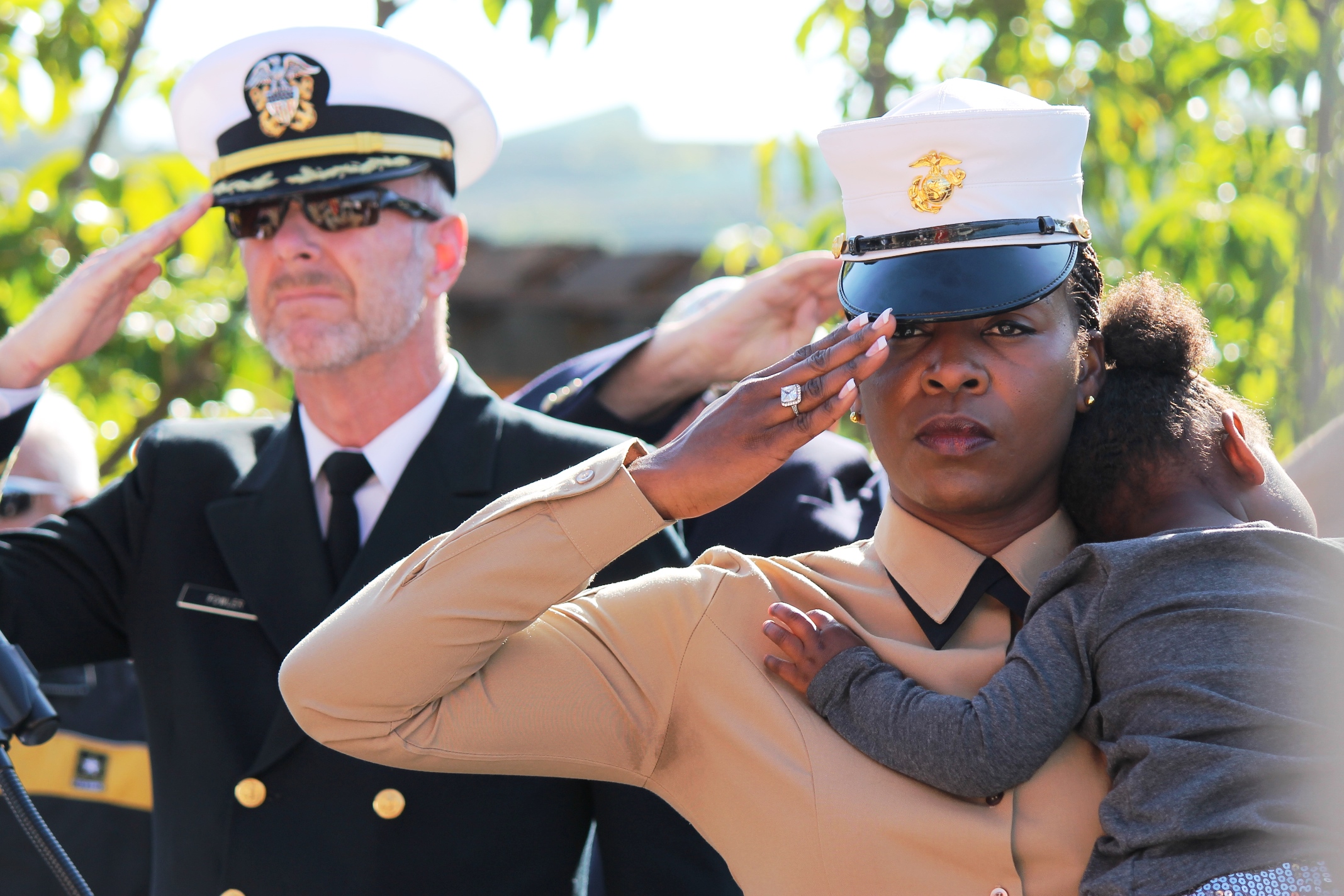 As U.S. Marine Corps Sgt. Major Donna Dunbar was called to the podium Monday she peeled herself from her young daughter’s grip. Her husband, Master Gunnery Sgt. Napoleon Dunbar, stood nearby.

The young girl’s hold on her mother loosened and her arms quickly wrapped tightly around her father’s neck, as Dunbar made her way before the hundreds gathered at Dana Point’s Veterans Memorial. Dunbar stood before the crowd and in a sign of gratitude removed her cap to the veterans, families and community members gathered this Veterans Day.

“Some of the military veterans out here know the separation anxiety we face when we have to go far, far away … for the things we do,” said the 24-year U.S. Marine Corps servicewoman. “Many sacrifices that go unrecognized are, time and time again, the struggles of our families.”

Listening on, the family and friends of Army Spc. Brandon Prescott wiped away tears.

A 2006 graduate of Dana Hills High School, Prescott enlisted in the U.S. Army in April 2010 after working as a forest firefighter in Oregon. Three years later Prescott would receive a medal for heroism in action.

On May 4, Prescott and four other soldiers sustained fatal injuries while on patrol in the Maiwand district of Afghanistan’s Kandahar province. The members of the 1st Battalion, 36th Infantry, 1st Brigade Combat Team, 1st Armored Division, stationed in Fort Bliss, Texas were on a nine-month deployment to the region. That day, their vehicle was struck by an improvised explosive device, Prescott was killed. He was 24.

Prescott’s name was recently placed on the Veterans Memorial at Strand Vista Park, where his ashes were scattered this summer.

Monday, the names of Prescott and Air Force Chief Master Sgt. Nicholas L. McCaskill, of San Clemente, who was killed in Afghanistan in April, were dedicated on the memorial. Four members of the Veterans of Foreign Wars Post 9934, who recently passed, were also unveiled at the ceremony.

“God bless those who have sacrificed so much to preserve the freedom that we enjoy today,” said Terry Rifkin, president of the Dana Point 5th Marine Regiment Support Group, after reading the names of Dana Point’s fallen service members. “These men and women will not be forgotten.”

The Veterans Memorial was first dedicated in April 2010 to commemorate five branches of service—Army, Navy, Air Force, Marine Corps and Coast Guard. Each Veterans Day since, the city and VFW Post 9934 rededicate the monument to the men and women whose names are inscribed in the deep, grey granite, who fought and died.

“This weekend, culminating in today, throughout the country and our posts around the globe, people will gather to honor and pay gratitude to those who have served our country,” Dunbar said.

“Our gathering here is just one small spark in the flame of pride that burns across the nation today,” Dunbar said.

Other speakers of the event included Mayor Steven Weinberg; Maurice Hansen, commander of the local VFW post and Sharon Miller, president of the Ladies Auxiliary Post 9934. The ceremony was led by Brad Fowler, the city’s director of public works, who is retired from the U.S. Navy.

A four-member color guard from the Camp Pendleton-based Marine Aviation Logistics Squadron 39 was on hand to present the nation’s colors. Members of the community performed songs to honor veterans and Councilman Scott Schoeffel played “The Star Spangled Banner” on the electric violin.

A Scout Gets His Wings

On Veterans Day, a new flag pole at South Shores Church was dedicated as a Veterans Memorial.

The project was spearheaded by Alex Morgenstern, 13, who earned his Eagle Scout wings by raising $5,000 to purchase the flagpole and construct the base. Morgenstern joins the Boy Scouts of America’s elite by achieving the highest rank possible in scouting.

South Shores pastor and U.S. Air Force chaplain Tyler Guy and his father Myrwood Guy, dressed in their blues for the dedication ceremony. The pole stands in front of the church’s sanctuary at 32712 Crown Valley Parkway, where Morgenstern and his parents have been long time members of the church, and where Alex attended preschool.

Poppies for their Buddies

Soon thereafter, the poppy was adopted as the national organization’s official memorial flower. Today, the tradition continues. Each “Buddy Poppy” is handmade by disabled and needy veterans in VA hospitals, and donations collected go back the support their recovery and veteran’s services in the community.

Find out more about the local VFW by visiting, www.vfwpost9934.org.