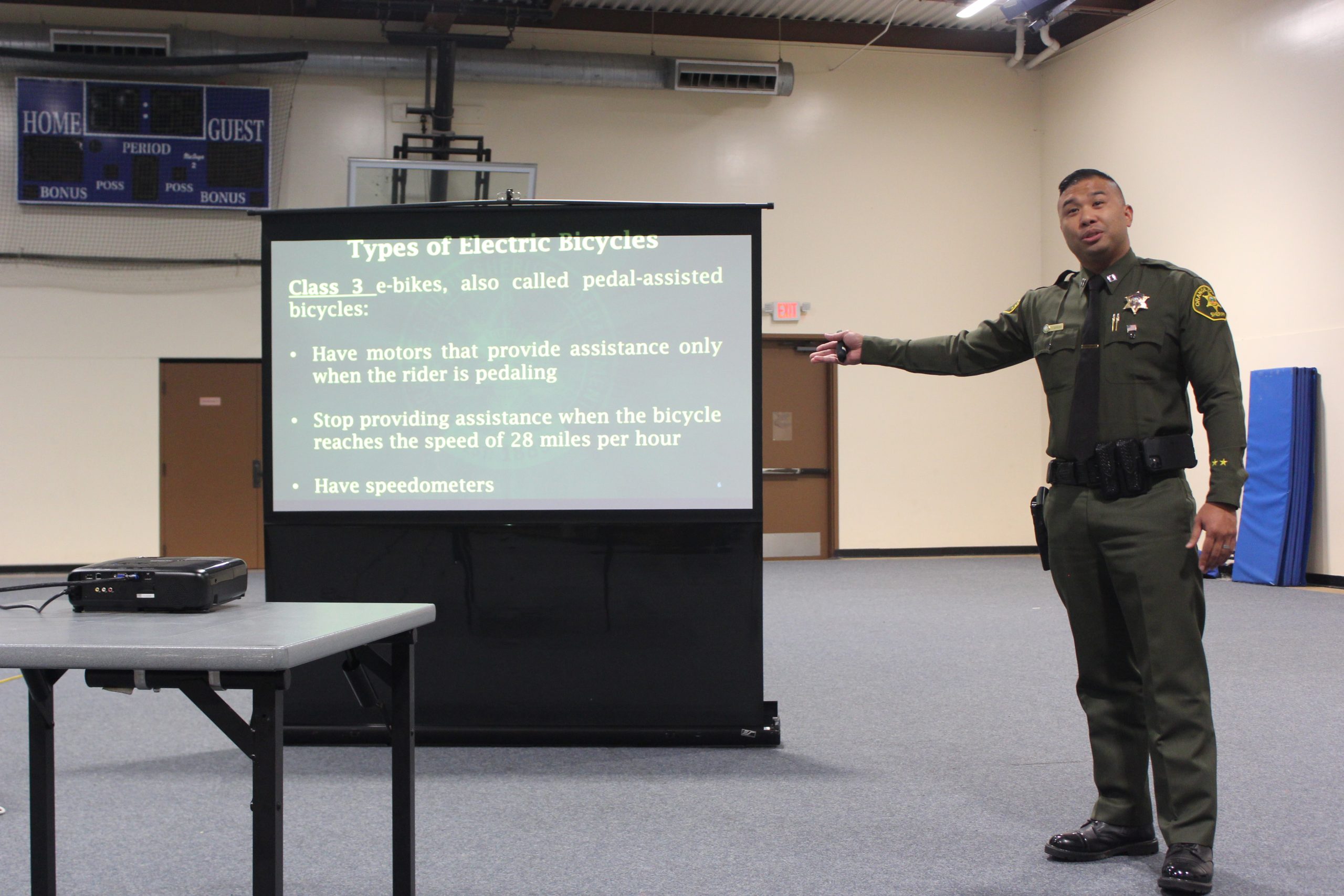 “It’s up to us as parents, as teachers, as neighbors, as friends to educate our family and our community members,” Asuncion said.

Asuncion, a father of three, said that e-bike safety hits home after a couple of his son’s friends were involved in a minor accident.

“As we went through the pandemic, and e-bikes became popular, we were seeing a trend of accidents and injuries,” Asuncion said. “So, in Laguna Niguel, our city council wanted to do something about it. … I was tasked with making this presentation and making sure that we get all the information out here.”

Essentially, an e-bike is a bicycle with a motor on it, Asuncion explained.

Class 3 e-bikes, which are also pedal-assisted but do not have a throttle, stop providing motor assistance when the bike reaches 28 mph. Kids under 16 are not allowed to ride Class 3 e-bikes.

Passengers are not allowed on any bike unless it is a tandem bike or has a built-in seat.

There are 28 parks and 11 trails in Dana Point, and there is signage letting riders know where they can or cannot ride their e-bike.

“Some of them are a little bit more obvious, like your conservation trails that overlook the harbor; those paths are little dirt paths that only one or two people can fit, so obviously, you can’t really be riding an e-bike through those areas,” Severson explained.

E-bikes are allowed on sidewalks, but riders are required to follow a 5-mph speed limit on sidewalks.

“I have kids myself; I prefer them riding on the sidewalk, and I know most parents do,” Asuncion said, noting that he tells his kids that if they “see someone walking, walking the dog, slow down, and let them know, ‘Hey, I’m here behind you,’ ring your bell and go really slow, ride next to them: ‘Hey, I’m on your left.’ ”

Bicycles or e-bikes are essentially vehicles, Asuncion said, so riders need to follow the rules of the road.

“We tell kids, act like a car, be predictable, be visible, making eye contact if you’re trying to cross the street,” Asuncion said. “OK, just simple stuff that we as licensed drivers know going for that driver’s test, like we have to teach our kids the same thing getting them ready to ride these bikes on regular roadways.”

Asuncion added that riders should wear bright, reflective clothing and make sure to use hand signals.

All riders must wear a fastened helmet for a Class 3 e-bike, and everyone under 17 must wear a helmet while riding Class 1 and 2 e-bikes.

Severson, who is primarily assigned to Dana Hills High School, added that she sees a lot of riders with helmets on but not fastened, and some helmets hanging from their bicycles’ handlebars.

“I tell these kids, it’s not really going to do much if you fall off your bike,” Severson said. “If your helmet’s not fastened to you, it’s not going to work.”

“Hey, I don’t know if it’s an ego thing,” Severson continued. “I know the floppy hair is really cool right now. So it’s not like you’re gonna mess your hair up; you know, everyone’s got kind of the helmet hair going on anyways; you gotta wear those helmets.”

“We’re going to educate as much as we can, but at some point, if it does not get fixed, we’re going to start enforcing, and unfortunately, some parents will be upset,” Asuncion said. “But at the end of the day, we want our kids to be safe, and we want to prevent a tragic accident.”