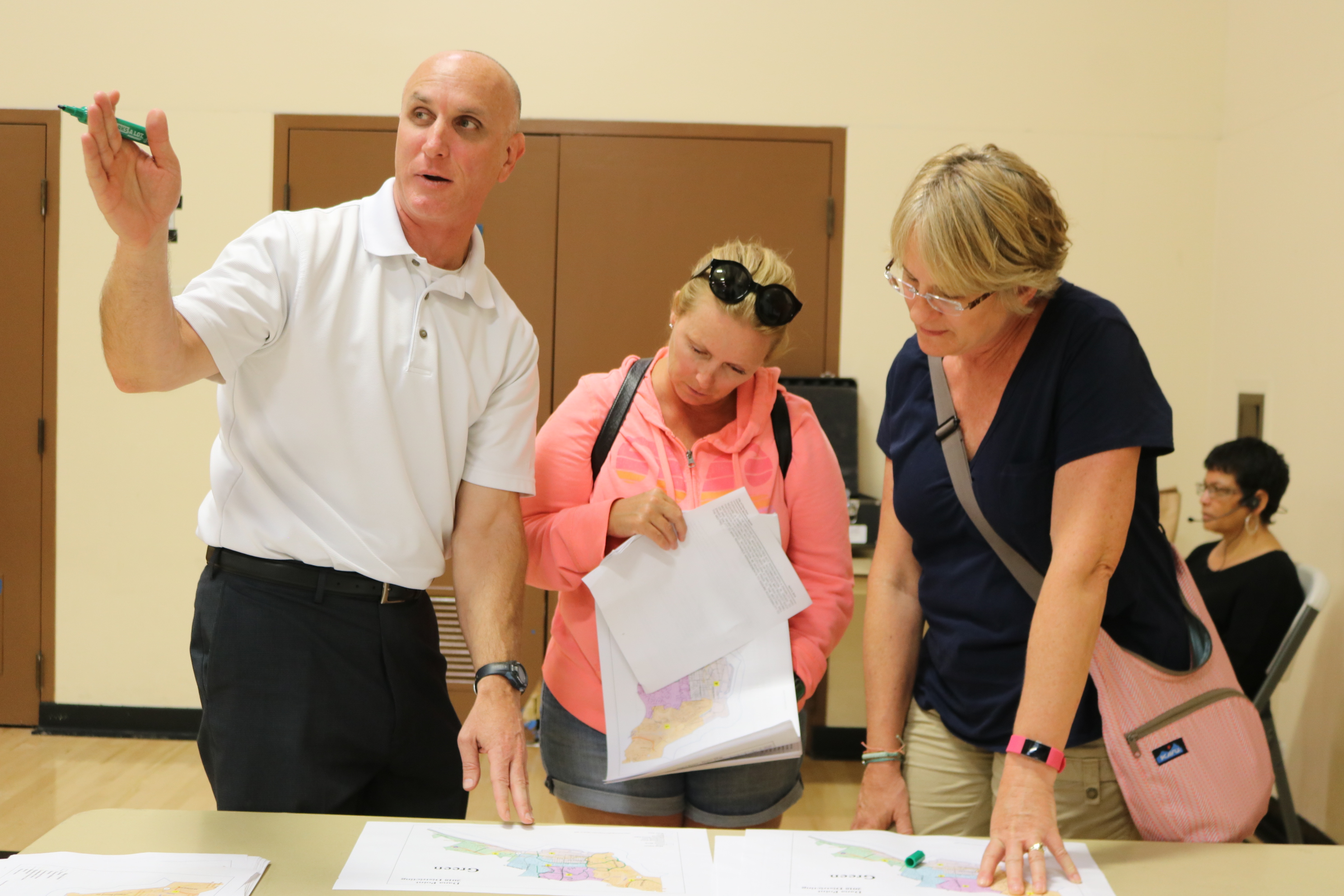 Doug Johnson from National Demographic Corporation was on hand to answer questions from the public. Photo: Daniel Ritz

Jenene Rudder (right) said that she lives in the The Village, and attended the public workshop. The described the workshop as a positive step, and voiced that she preferred four districts with an at-large mayor. Photo: Daniel Ritz

Citizens were able to express their feelings on draft maps and by district voting. Here, a few residents expressed their feelings. Photo: Daniel Ritz

On April 9, the City of Dana Point hosted the first of two by-district voting public workshops at the Dana Point Community Center.

After an introduction from City Manager Mark Denny, Ramirez and Johnson spoke to the crowd of nearly 75 Dana Point residents concerning their respective expertise. From there, City staff and City Council members took stations along the draft maps, operating in a cycle, speaking to community members in an attempt to better understand the public’s feeling regarding the draft maps. Also, Ramirez and Johnson would man “legal” and “demographic” tables where citizens could sit down and ask questions concerning the by-district procedure.

One prevalent topic of discussion for Ramirez at his table surrounded the options available in draft maps for four districts with a mayor elected at-large versus a complete five-district draft map. Ramirez expressed, supported by a statement in a hand-out they supplied, that the only option that completely insulates the city from liability under the California Voter Rights Act is adopting a “by-district,” election system, where all Council members are required to reside in a single-member district and are elected only by the residents of that district, according to election code 14026 and 14027(A).

Across California, more than 147 cities have moved forward with district voting by electing pre-emptively on their own accord or settled their CVRA lawsuits by moving to district voting with an at-large mayor. To date, none of those cities have been have sued for continued violation of the CVRA.

Jenene Rudder, Dana Point resident, thought the meeting was a good start, but supported moving forward with the four districts with an at-large mayor.

“I want to have an impact,” Rudder said.

“You have to realize, as an elected official, from the get-go, you have to work together,” said Council member John Tomlinson. “At the end of the day, we’re one city.”