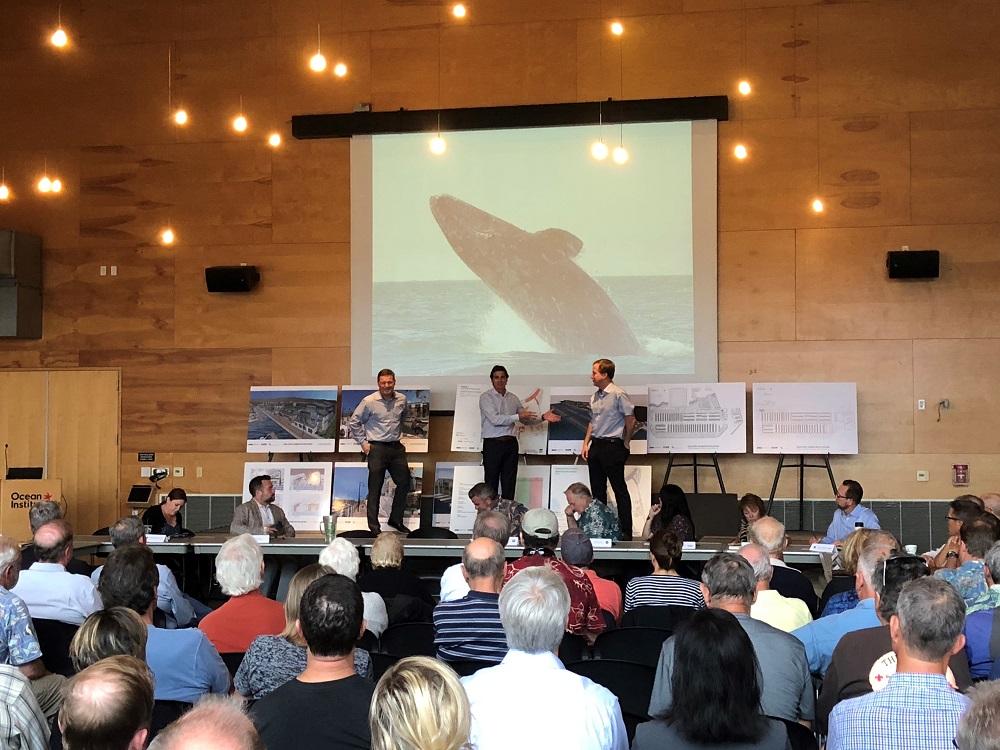 Bryon Ward is the manager of Burnham Ward, the development partner company responsible for the revitalization of the commercial aspect of the Harbor. He opened the meeting for the DPHP, stating its intent was to address timeline and construction phasing and to update the public as to DPHP’s progress with the Harbor’s various stakeholders.

Ward discussed and shared visual elements displaying that once ground is broken, the Harbor revitalization is expected to take place over a seven-year span and will include five phases.

“It is more expensive and more work, but our ultimate goal is to disrupt and displace as little as we can,” Ward said. For instance, a parking structure to include more than 900 parking spaces, more than what currently exists in the entirety of the Harbor, would be a portion of the initial stage in order to house vehicles and visitors during following construction phases.

R.D. Olson Development will be overseeing the hotel portion of the Harbor’s revitalization. They explained that there are two new hotels slated, one 130-room boutique hotel open near the current entrance to the Harbor, with another hotel to be supplemented, as required by the California Coastal Commission (CCC), to be a more affordable “select service” hotel. If Local Coastal Amendment permits are granted by the City of Dana Point and the CCC, hotel room availability within the Harbor is expected to rise from its current 220 rooms to more than 260.

R.D. Olson said that hotel construction could take as little as 24-months to complete. They also stated that moving forward, the hotels will be managed by third party vendors, but that they are investing in the current Marina Inn through the acceptance of their lease until the changes are finalized.

Bellweather Financial took the stage last, explaining that the water-side portion of the revitalization efforts could be the most time consuming, with an estimated 4 to 5-year construction period. Also taking place over a series of phases, Bellweather explained that they hope to do complete remodels of small portions of the Harbor before returning those boats to their slips and beginning on another small section.

Executive Director of the Surfing Heritage and Culture Center (SHACC) Glenn Brumage asked the panel how they were facilitating the use of the Harbor for those other than merchants and boaters.

“We’re supporting it in a big way,” Ward responded enthusiastically. “We understand that this is ground zero for surf and watersports culture and once we are able to finalize the option-period plans and get on to construction specifics we can begin to discuss things like the inclusion of a new Surfing Heritage and Culture Center museum within the Harbor.”

Seeing as the Orange County Board of Supervisors approved entering into the public-private partnership with the DPHP in late July and the 90-120 day option period is little more than half-way through. DPHP and the County did express multiple times that there are options to extend the period if need be. To see the most current information regarding option period documentation, visit www.dphadvisory.org.