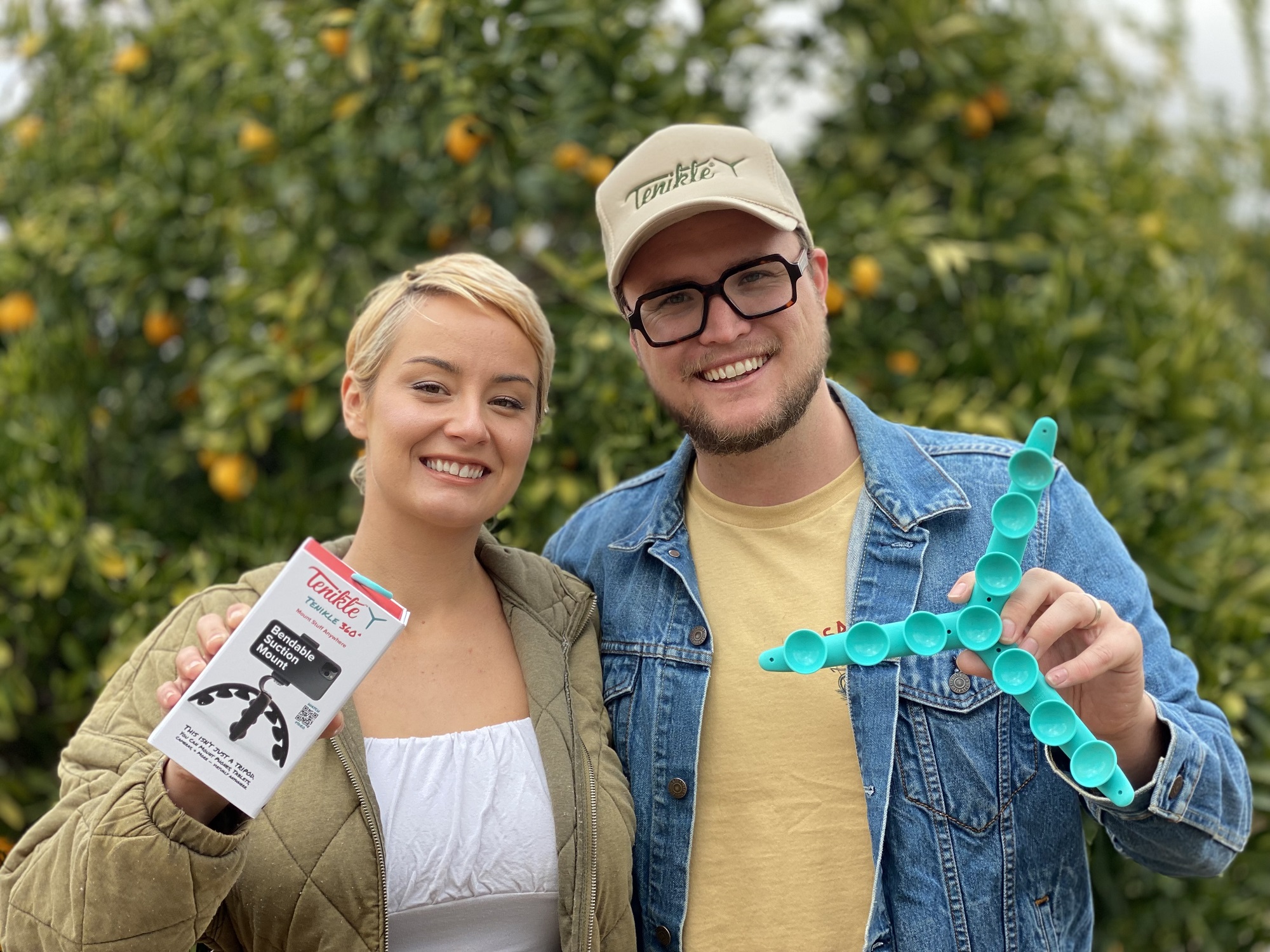 A cracked phone screen and a love for the ocean drove Dana Point couple Hans and Lydia Dose to invent Tenikle, an octopus-inspired phone stand. Their invention landed Hans on ABC’s Shark Tank on Dec. 17.

Wanting to show both the functionality of the product and the personality of the brand, Hans started his pitch to the sharks in an octopus inner tube, flippers and a wetsuit.

“Coming out with flippers, and the wetsuit, because Tenikle was inspired by the sea, I think I just wanted to be ridiculous, have a really good time, and to sell the product and get people to understand how useful Tenikle actually is for so many people,” Hans told Dana Point Times this week. “That was the goal, and I think we nailed it, to be honest.”

After receiving offers from investors Robert Herjavec and Daymond John, Hans chose to partner with John.

“I was actually hoping to get a deal with Daymond John, because there were some other ideas that I had, that I knew that he would be perfect for, and I’ve been following him for a while,” Hans said. “I follow all of them, but I really felt like he stood out as far as he would be a great partner to work with.”

Before the phone stand, Hans had been working on a phone case with attachments, similarly inspired by octopi. But it wasn’t until Hans cracked his phone screen on a hike that the idea for Tenikle was born.

While on a hike, Hans and Lydia stopped to take a photo together. They had forgotten their tripod, so Hans tried to perch his phone on a tree branch, but the phone toppled off the branch and the screen cracked.

“I go and I put my phone in the car mount in the car—this big, bulky, suction cup car mount—and I was like, ‘Why couldn’t that have also just been used as a tripod?’ ” Hans said. “That was the initial like, ‘Oh, maybe I’m onto something here.’ ”

After that, Hans went to work in his garage, building a prototype. Lydia printed 3D models of the prototypes.

“Every time I gave it to a friend or family member to try out, they all had this discovery moment where they realized that they can use it for different situations that I never thought of,” Hans said.

His friends quickly found more uses for Tenikle than he or Lydia had originally thought.

“That light bulb just went off with everyone that messed with it,” Hans said. “So, it kind of became like, ‘Oh, this is a much bigger product than I had anticipated—of mixing a car mount and tripod together.’ It’s actually a lot more useful than that.”

Tenikle was largely inspired by Hans’ experience growing up by the beach. Hans grew up in Dana Point, sailing, surfing and snorkeling.

But when COVID-19 hit, Tenikle was hit hard with supply-chain issues. Hans and Lydia ended up moving out of their Dana Point home and into an RV.

“It felt like we started to get to know everyone, and that was really our home, and all of a sudden, so quickly the business turned south, and we had to do what we had to do to survive and ended up taking a really huge risk and decided, ‘You know what, we’re still going to go for this thing; it’s going to work out,’ ” Hans said.

The couple hopes to move back to Dana Point in the near future.

Within 24 hours of the Shark Tank episode airing, the company made more than $250,000 in sales, according to Hans.

“Our Amazon listings sold out before the show stopped,” Hans said. “Like everything sold out; it was crazy.”

Hans can be seen pitching Tenikle on Season 13, Episode 9, of Shark Tank.