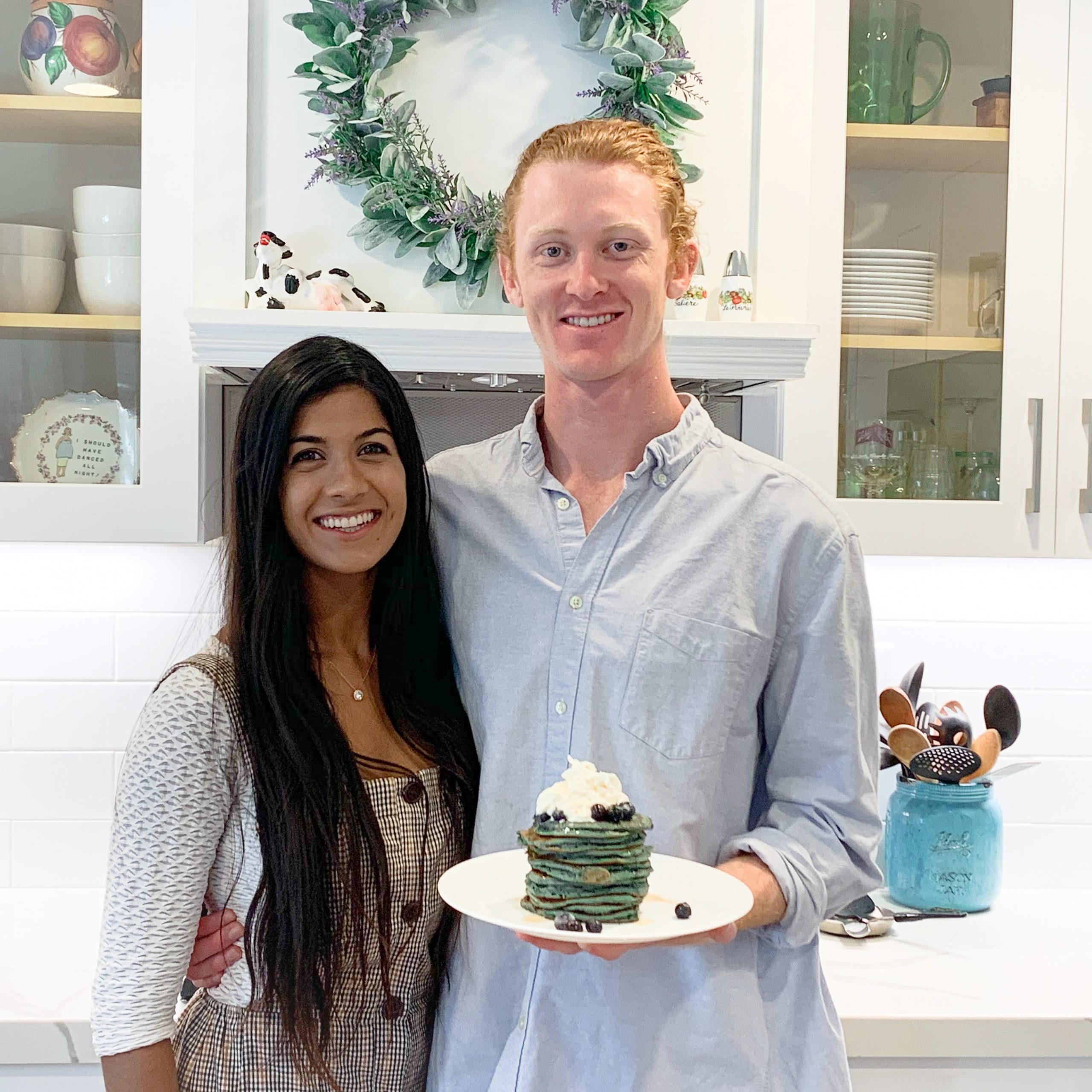 Ambika Mathur and James Paul set out to reinvent breakfast as a fun, healthy and beautiful ritual to start the day.

After some product development, and with the support of the community, the Dana Point couple, both age 23, now sell their colorful paleo pancake “Super Batter” at the weekly farmers market at La Plaza Park.

“I love eating pancakes,” Mathur said. “I’m a yoga instructor for Studio A; I’m really into healthy living. One day, I was craving matcha and pancakes. I thought, ‘Why not combine them?’ “

Mathur was no stranger to starting a business. While earning a degree in landscape architecture and sustainable design at UC Berkeley, Mathur started her own chia pudding business.

“I took that model and applied it toward this pancake/waffle mix idea and expanded it further,” Mathur said.

Paul, who grew up in Rancho Santa Margarita, met Mathur while attending Berkeley for a degree in economics. Now the couple resides together in the Lantern District.

“We wanted to develop something that was paleo and looked dope,” Mathur said. “Something healthy but different.”

Super Batter launched in June, and Mathur says she and Paul have had to hit the ground running. As of now, Super Batter offers four different Superfood Pancake & Waffle Mixes, all paleo, gluten-free, with no sugar added: Blue Matcha, Cacao, Pitaya (which appear pink,) and Adaptogen (with Reishi, Lion’s Mane, Maca, and Ashwagandha). The successful launch has, in part, been thanks to Rob Wilson, the chef and owner of Glasspar in Dana Point, who allowed Super Batter to be developed in the restaurant kitchen.

Since launching as an e-commerce store, Super Batter has grown into the Dana Point Farmers Market, Encinitas Farmers Market, and several grocery stores in San Diego. Mathur says the company has also lined up deals with Gelson’s Market and Bristol Farms.

“It has a really long shelf life, and all you need to do is add water,” Mathur said. “We love how some of our customers get creative with the mix and make donuts, cookies, brownies, souffles, crepes. The colors of the mix just pop, and it looks so vibrant as a finished product on a plate.”

Super Batter mix is also grain-free, with no added sugar and low on the glycemic index. The blue matcha and pitaya mixes both have antioxidants, while the cacao mix contains properties known to alleviate stress, Mathur said.

“In the Adaptogen Mix, the lions mane mushroom is an ingredient good for memory, the reishi mushroom is good for immunity, maca boosts energy, and the ashwagandha root deals with stress,” Mathur said. “It’s pretty cool that all that is in a pancake. And the coolest thing is that it doesn’t taste like it’s healthy. You can give it to your kids, and they would never know how crazy good it is for them.”