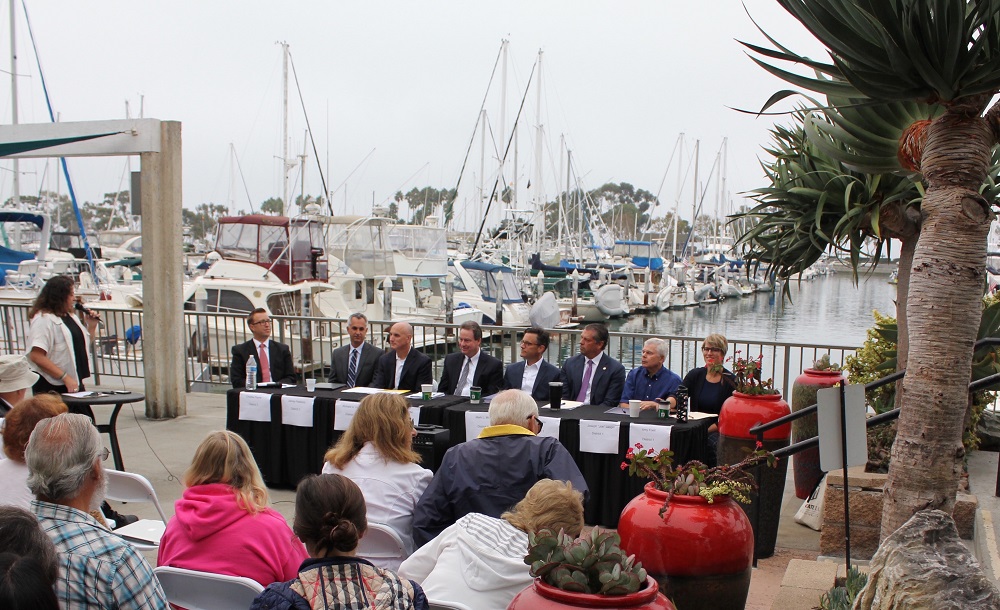 This article has been edited for clarity regarding Scott Schoeffel’s stance on short-term rentals.

In accordance with a longstanding tradition of hosting political panels, the Dana Point Civic Association welcomed voters to hear out the candidates’ responses to questions submitted by the community ahead of November’s election.  Several dozen residents filled the audience outside Coffee Importers at the Harbor, where they could enjoy free coffee during the event.

“The association wanted to give constituents the chance to meet their candidates on a personal basis in an intimate setting,” said Terry Walsh, a member of the Civic Association. “This gave people an opportunity to know who could be representing them.”

This will be the first election in Dana Point that incorporates districting for a seat on City Council. Vying to represent District 1 is incumbent Mayor Pro-Tem Joe Muller, former Financial Review Committee member Joseph Jaeger as well as Amy Foell. Constituents in District 2 will choose between incumbent Mayor Richard Viczorek, former council member Scott Schoeffel and Mark McGinn. Charles Payne and Jamey Federico, both political newcomers, are vying for the District 3 seat.

When asked which actions should be taken to address homelessness in the city, Jaeger, Federico, Viczorek and Schoeffel commended the Homeless Task Force for its efforts in reducing displacement. The city recently took action to increase outreach through Mercy House to six days per week and has initiated a program to support similar nonprofit organizations to combat homelessness.

The eight candidates differentiated on their positions regarding short-term rentals and their effect on local economy and way of life. “I did not buy my property to live next to a business. I don’t want to live next to a frat house,” Jaeger said.

McGinn agreed, adding that short-term rentals, such as AirBnB, “torpedo” the source of revenue that local hotels bring to the city. Viczorek, Muller and Foell asserted their favor for short-term rentals but applauded keeping hosts accountable for trash or noise. Schoeffel’s platform calls for residents and neighborhood associations to have the power to regulate short-term rentals within their own designated area.

“This is a great example of how we can come to a compromise, maybe put a maximum amount of nights a residence can be rented out throughout the year. If we’re worried about frat houses and parties, we can come together to make a plan and balance our rights,” Federico said.

All eight candidates agreed that the Town Center was a prudent investment for the future, although Muller proposed a referendum that would reexamine the restrictive nearby parking brought on by Measure H.

If you missed Friday morning’s event, the Dana Point Civic Association organizes a monthly Coffee Chat, with October’s guest speaker to be announced. Voters will select the next three City Council members on Nov. 6. Visit www.danapointtimes.com for updates on election information and future events.