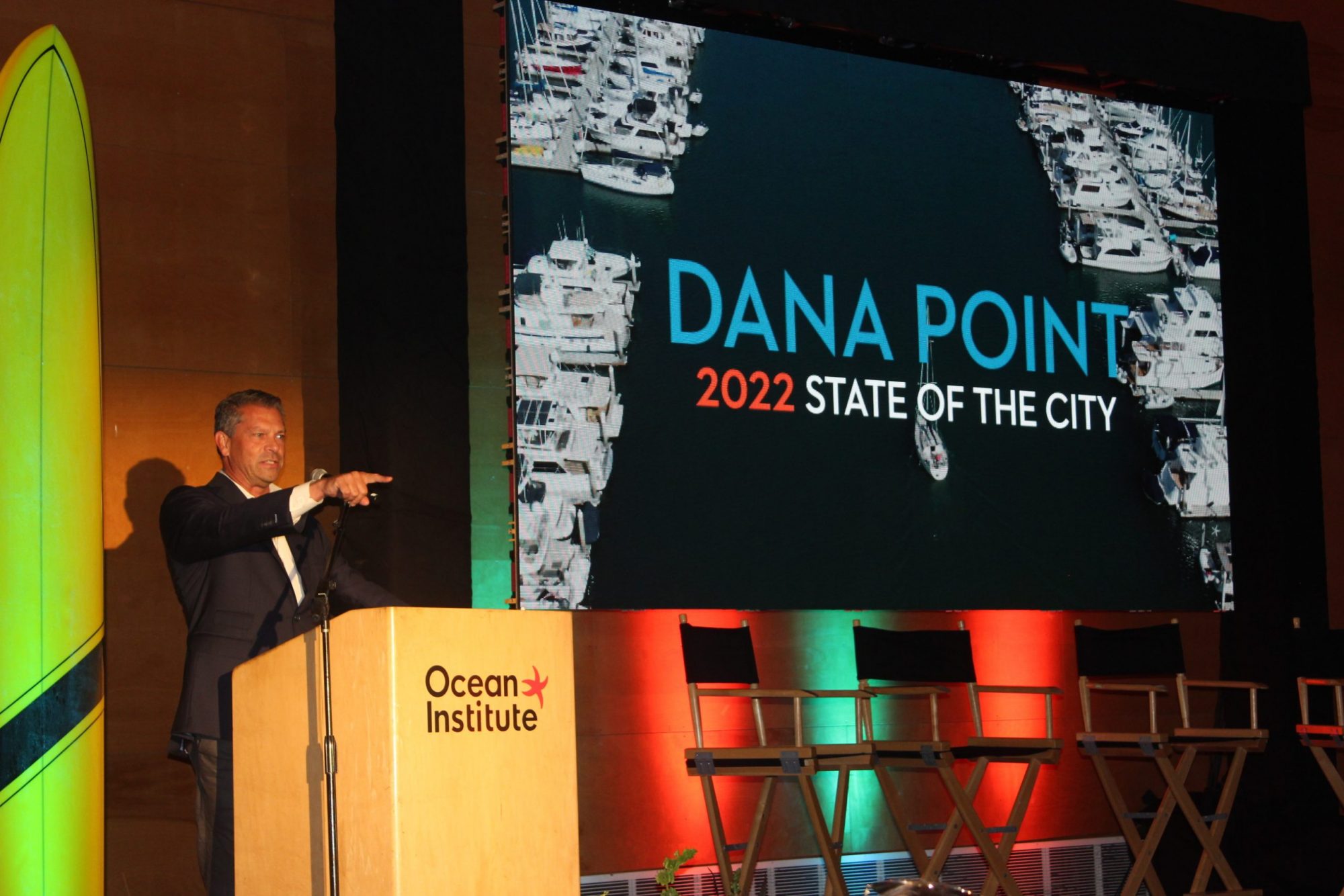 Editor’s Note: A previous version of this story reported Mayor Muller’s remarks regarding new hotels set to open soon. The city has clarified that the hotels will open in the coming years.

Dana Point held its annual State of the City on Wednesday, May 11, providing updates on the city’s progress and investment in arts and culture, as well as celebrating community members who have helped to shape it.

Mayor Joe Muller hosted the event, which featured a video presentation and panel. The event’s theme, “Shaping Our Community,” centered around the business leaders and community leaders bringing new events and development to the city.

Ahead of the video presentation, Muller provided an update on the city’s budget, development, and environmental and philanthropic efforts.

This year, 77,557 square feet of new commercial and retail space is being developed in the city with the aim of attracting new businesses and restaurants, and giving existing businesses in Dana Point the chance to expand, according to Muller.

According to Muller and the city, seven new hotels that are soon expected to open will bring in 655 additional beds.

Transient occupancy tax, the city’s biggest revenue generator, is projected to bring in $11 million this fiscal year, according to the city’s budget.

Muller also stated that the city’s reserves and economic uncertainty account is at 100%.

“What that means is through this whole pandemic, we were able to replenish our accounts already, and then stay fiscally sound,” he said. “So, if it happens again, we’ll be OK.”

The city is also building three Monarch butterfly habitats around the city to protect the vulnerable population of the migratory species.

Muller added that 500 whales were seen this year off Dana Point’s coast, and 2,210 pounds of trash was cleaned from the harbor and beaches through Vicki Patterson’s organization, Stand Up to Trash.

Also featured in the video were events, such as the REDO Vintage & Maker’s Market, and the residential development of Prado West that have brought the Town Center Plan of a pedestrian-friendly community to life.

The video provided an update on the Seaside Inn renovations, aiming to be “an elevated Spanish Hacienda” with 30 rooms.

And it further highlighted local business owner Jason Spates of Doheny Bike and his philanthropic efforts in the city, donating helmets and toys through the city’s youth board.

The video was followed by a panel of business and community leaders who are shaping the city through new hotel and restaurant developments, and events. The panel featured Jeff Finn and Danny Hyde, co-presidents of Artist Guild Hotels; Max Fisher, owner of The Shwack Beach Grill; and Randy Hild, founder of REDO Market.

Kicking off the panel, Finn and Hyde discussed why they chose to take on the project of renovating the Seaside Inn.

“I just love that you can create something where people can come in and establish happy experiences,” Hyde said. “I felt like that hotel, that location was underserved; nobody was spending time or thought into it for easily 20 years, and it’s on the beach, so I have no idea how it got ignored.”

Finn added that they’ll be putting a pizza oven in and “doing what we can to make it more beachy.”

Fisher told the story of founding Shwack, the expansion to Del Prado, and the restaurant group that he’s formed with some friends called Hometown Hospitality.

“It was all about creating, like, a hometown spot where it’s wallet-friendly,” Fisher said. “You can come in off the beach with the family. Sandy feet, no one cares. Let’s just have a fun spot for everybody to hang out.”

During the panel, Hild discussed how REDO began at Del Prado as a surf and skate market and how it developed into the popular vintage and maker’s market bringing a large vintage community to Dana Point.

Hild added that when the pandemic hit after REDO’s first event, he came close to “just throwing in the towel,” wondering if he should even reschedule the event. But he said friends, vendors and the community came out in droves to support bringing REDO back.

Hild also announced that REDO will return to Del Prado for a second Sunday this year, on Oct. 2.

Fisher added that the new events are bringing the town center alive.

“It’s so great that we have these things and now they’re showing the fruit of what is potential when we have more businesses downtown, more owner-operated stuff, more partners in the community that can show support like you guys do for these types of events,” Fisher said. “They’re just going to get better and better. I can’t wait to do more. What’s the next event?”