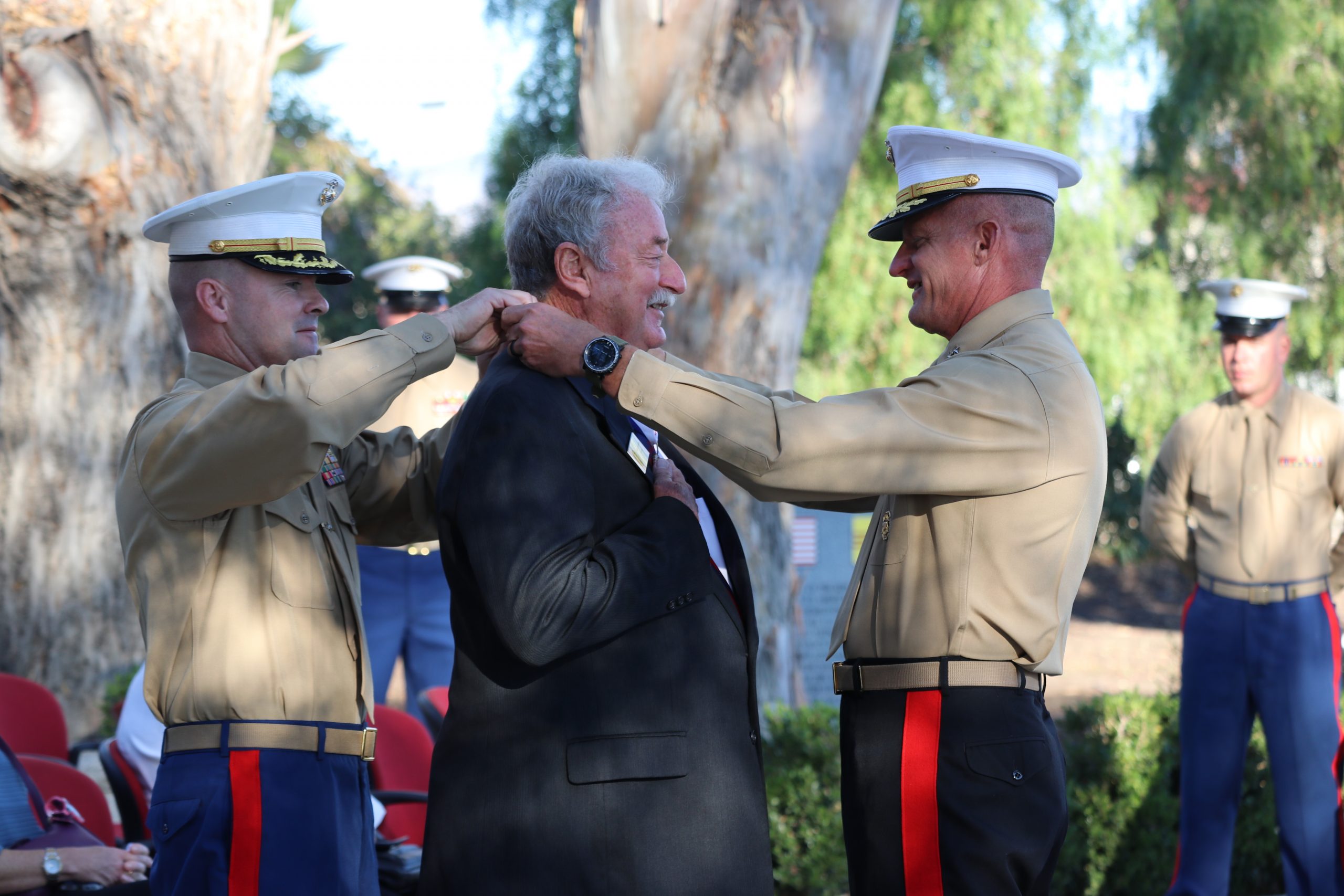 The Dana Point 5th Marine Regiment Support Group (DPSG) was presented with the “Spirit of Hope” Award for its support of the Marines, Navy Corpsmen, and families of the 5th Marine Regiment of the United States Marine Corps headquartered at Camp Pendleton.

The Spirit of Hope Award was established in 1997. It was first granted to entertainer Bob Hope by the United States Congress and is awarded annually in his honor. The basis for the award was to recognize Hope’s commitment to entertaining military servicemembers over many decades, both within and outside of combat zones. The Department of Defense now presents the award to winning recipients.

“We are truly honored to be chosen for the ‘Spirit of Hope’ Award from among so many other patriots and generous Americans who were nominated,” DPSG President Mike Lipscombe said. “We will continue our mission of caring for the ‘Fighting Fifth’ and their families for many years to come.”

Lipscombe accepted the Spirit of Hope medal at a ceremony held on Wednesday, Nov. 10, at the Memorial Garden in the San Mateo area of Camp Pendleton—the same day that the U.S. Marine Corps celebrated its 246th birthday.

While the Spirit of Hope Award is traditionally presented to recipients at the Pentagon, the location was moved to Camp Pendleton due to COVID concerns. Lipscombe said that being able to accept the award at the garden that the support group has helped develop and care for was just as meaningful.

The DPSG aided in spearheading the effort to bring the 5th Marines Vietnam War Memorial for Camp Pendleton—an effort that took about a decade.

“The Memorial Garden is a special place, because it gives people who have served in the 5th Marines in the past a place to come back to and reflect on those who were lost,” said Capt. DJ Sargenti.

Lipscombe got involved with DPSG in 2013. While his military service during the Vietnam War brings a unique perspective on what members of the “Fighting Fifth” may need from the community, Lipscombe says those needs are constantly changing.

Lipscombe has been president for the support group for three years. He says the DPSG’s achievements could not have been done without the efforts of each volunteer and a rallying community.

“I’ve been in a couple other Marine Corps units before here. There’s never been anything like this,” Sargenti said of the support group. “This is very unique. Everything that the Dana Point 5th Marine Support Group provides is unmatched.”

For the Spirit of Hope Award, each division of the Armed Forces and the Department of Defense is invited to nominate an individual or organization who epitomizes the values such as duty, honor, courage, loyalty, commitment, integrity, and selfless dedication, and who significantly enhances the quality of life of servicemembers and their families serving around the world, and contributes an extraordinary amount of time, talent, or resources to benefit servicemembers.

The DPSG is a nonprofit organization that supports U.S. servicemembers and their families from the 5th Marine Regiment and the Wounded Warriors Battalion West at Camp Pendleton. It currently has more than 350 volunteers from all walks of life. For more information, visit danapoint5thmarines.com.