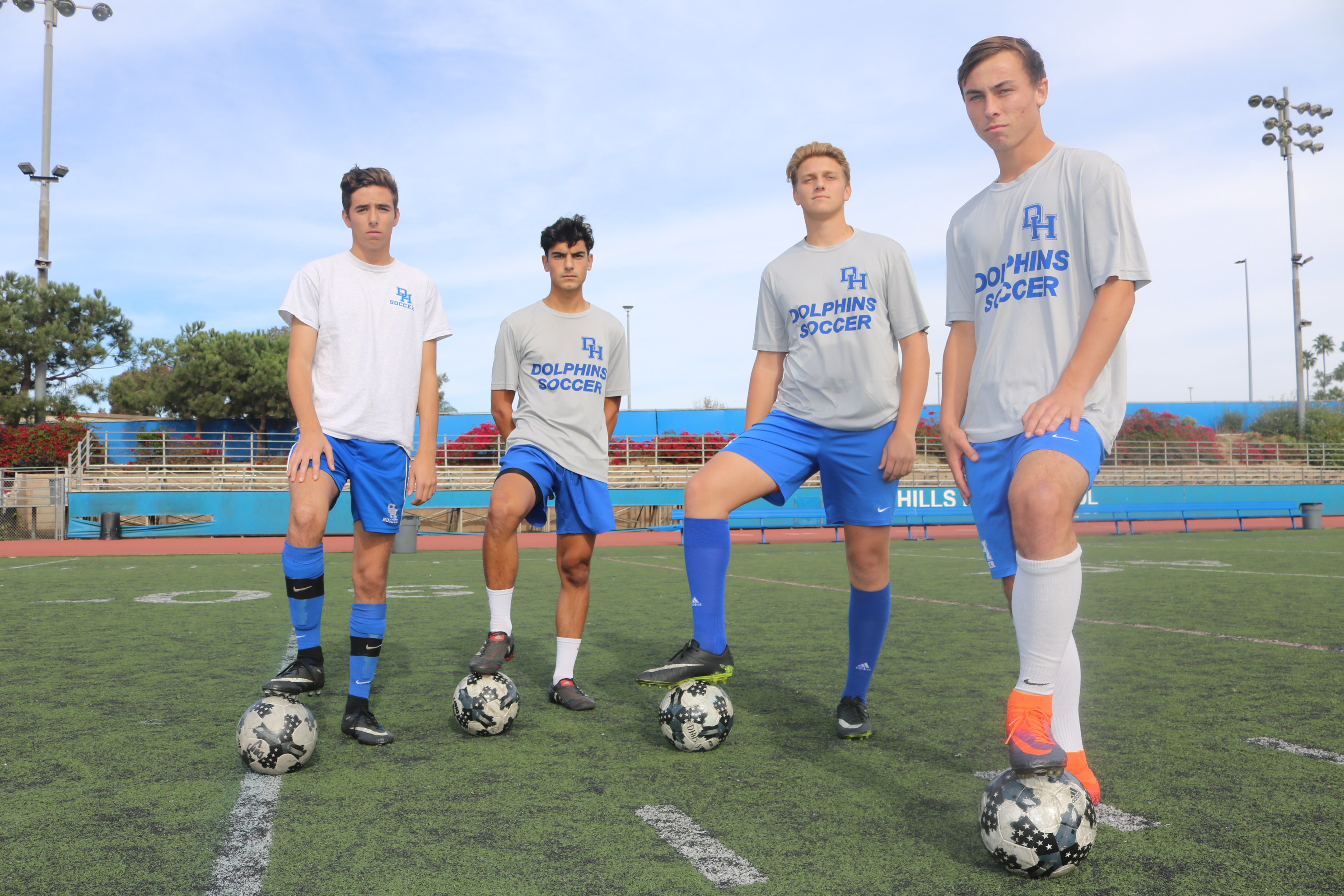 The high school winter sports season is underway. In our annual preview, we get you caught up on all of the Dana Hills High School programs as they head into the new year.

For in-game updates, scores, news and more for all of the Dana Hills programs, follow us on Twitter @SouthOCsports.

The Dana Hills boys soccer team underwent some change this offseason. First-year coach Mark Torrianni was brought in to lead the varsity team midseason one year ago and will now lead a new crop of players into the new year.

Torrianni has taken on more players than usual on the varsity squad, doubling up every position with at least two players that are capable of playing at the spot. The Dolphins also have 14 seniors on the team but underclassmen are pressuring them for playing time, Torrianni said.

The group started the year off right with a 2-1 victory over Laguna Beach at home on Nov. 29.

Returning senior midfielder Bobby Reynolds will be key to the Dolphins’ success. Reynolds has the ability to drop back and play strong as a defender and ignite the offense, Torrianni said.

One trend Torrianni is hoping his team can end is their play in league competition. The Dolphins went winless in the Sea View League last year.

“We’ve had a long history here now of not winning in league. We tear it up in preseason and it seems the wheels fall off (in league),” Torrianni said. “So that’s been our focus, to have them carry that momentum all the way through the year.”

First-year coach Zaid Malkosh has brought a lot of change to the Dana Hills girls soccer team this offseason. Malkosh, who spent the past two years coaching the Dolphins’ lower-level teams, wants the 2017 version of the Dolphins to play with a new style and a new mindset.

Malkosh brings with him a whole new style of play, one he says emphasizes a controlled attack and team defense.

Malkosh wants the Dolphins to attack from the flanks and utilize their skill in the middle of the field on offense. Leading the charge will be senior midfielder Sarah Tarhan and sophomore midfielder/forward Victoria Barnet.

Acacia Vanlandingham, Jillian Hutchinson and Camryn Toole are all skilled players that will score goals in bunches, Malkosh said.

Malkosh arranged the Dolphins’ schedule to be heavy with games in December, rather than frontload and start early in November. This has given the team time to focus on the new system.

“The culture that was set up here was great, we just want to build up on it now,” Malkosh said. “We hope the change will succeed.”

The Dolphins will play in the Aliso Cup Tournament in December to prepare for South Coast League play.

This is the season that the Dana Hills girls basketball team has been looking forward to for some time.

Coach Anne Honey took over the program three seasons ago, inheriting a young team that has now spent the last few years growing and morphing into a contender.

In Honey’s first season at the helm, in 2015, the Dolphins won nine games, four more than the previous season. In 2016, Dana Hills won 16 games.

Last year, the Dolphins had a landmark year and won a program-best 20 games.

With a large group of returning players, including the team’s leading scorer Peyton Romo and impact junior and college recruit Maya McArthur back in the mix, Dana Hills will be looking to maintain momentum.

The only blemish on the Dolphins resume the past two seasons is back-to-back runner-up finishes in league and early postseason exits.

“We’ve been building and it’s been good, but the last two years we’ve taken second in league and lost both first-round playoff games in overtime,” Honey said. “So we have unfinished business that has been on our mind big time.”

Romo, who averaged 15 points per game as a junior, and McArthur, a dynamic 6-foot-1-inch player that did not play last year due to eligibility requirements, are joined by returners Maicie Saia, the team’s point guard, Olivia Chambers, Camille Deol, Megan Honey and Dani De La Fuente.

Dana Hills is off to a 3-0 start to the season, with wins over Avalon, Cypress and Tustin, which came in the Corona del Mar Tip Off Tournament.

Coach Tom Desiano believes versatility will be the key to the Dana Hills boys basketball season this year. Plus, the coach added, the Dolphins’ return a sizeable experience and work ethic.

The Dolphins are not loaded with height (Weise is the team’s tallest listed player at 6-foot-5-inches), which Desiano says helps them be versatile on the court, especially on defense. The Dolphins will be active in switching on defense and ask every player on the court to be ready for any matchup.

“Sometimes our 5-foot-10-inch guard has to cover a 6-foot-6-inch post player, that’s just the nature of our system,” Desiano said. “But they’re aware of what we’re trying to do. Now I believe they’re confident.”

The Dolphins started the season off with a convincing 60-33 win over Loara in the Godinez Grizzly Invitational on Nov. 27. The Dolphins got contributions from everywhere as Carr scored 20 points, including four 3-pointers, Wiese scored 17 and Slagle poured in 10.

The Dolphins were set to play three more tournament games over the next week. Dana Hills will compete in the Garden Grove Tournament in two weeks and the Rancho Mirage Holiday Classic during the holiday break.

There was very little turnaround on the Dana Hills wrestling team this offseason, which bodes well for an experienced group that is eying a deep march into the postseason.

Dana Hills returns six seniors and a mix of underclassmen that should contend for the Sea View League title. Coach Reza Abedi anticipates a handful of his players to place at the CIF tournament, which would qualify them for the CIF-SS Masters competition.

Senior Levi Jones, a top-12 finisher at CIF last year, might move down a weight class, from 152 pounds to 145, but has the ability to wrestle competitively at both, Abedi said.

Senior Kian Abedi is another top-12 CIF finisher from last season who returns to the roster.

Sophomore Sadie Camacho advanced all the way to the CIF State Championship tournament last year, and figures to do the same this year once she recovers from an injury.

Six players, including four key starters, return to the Dana Hills girls water polo team this season. The Dolphins have been competitive over the years, placing third in the tough South Coast League each of the last three seasons.

On offense, the team will be powered by senior attack Cate Hill and Lauren Bellavia.

“The girls have been putting in the work to ensure they’re ready,” Pierce said. “They’ve been challenging themselves in the weight room three days a week and in the pool with conditioning and leg strengthening. They’re a super-close group.”

Dana Hills will compete in CIF-SS Division 3 this season. They will see a lot of Division 3 programs at the Brenson Cup Tournament this weekend, which will be the Dolphins’ season debut.