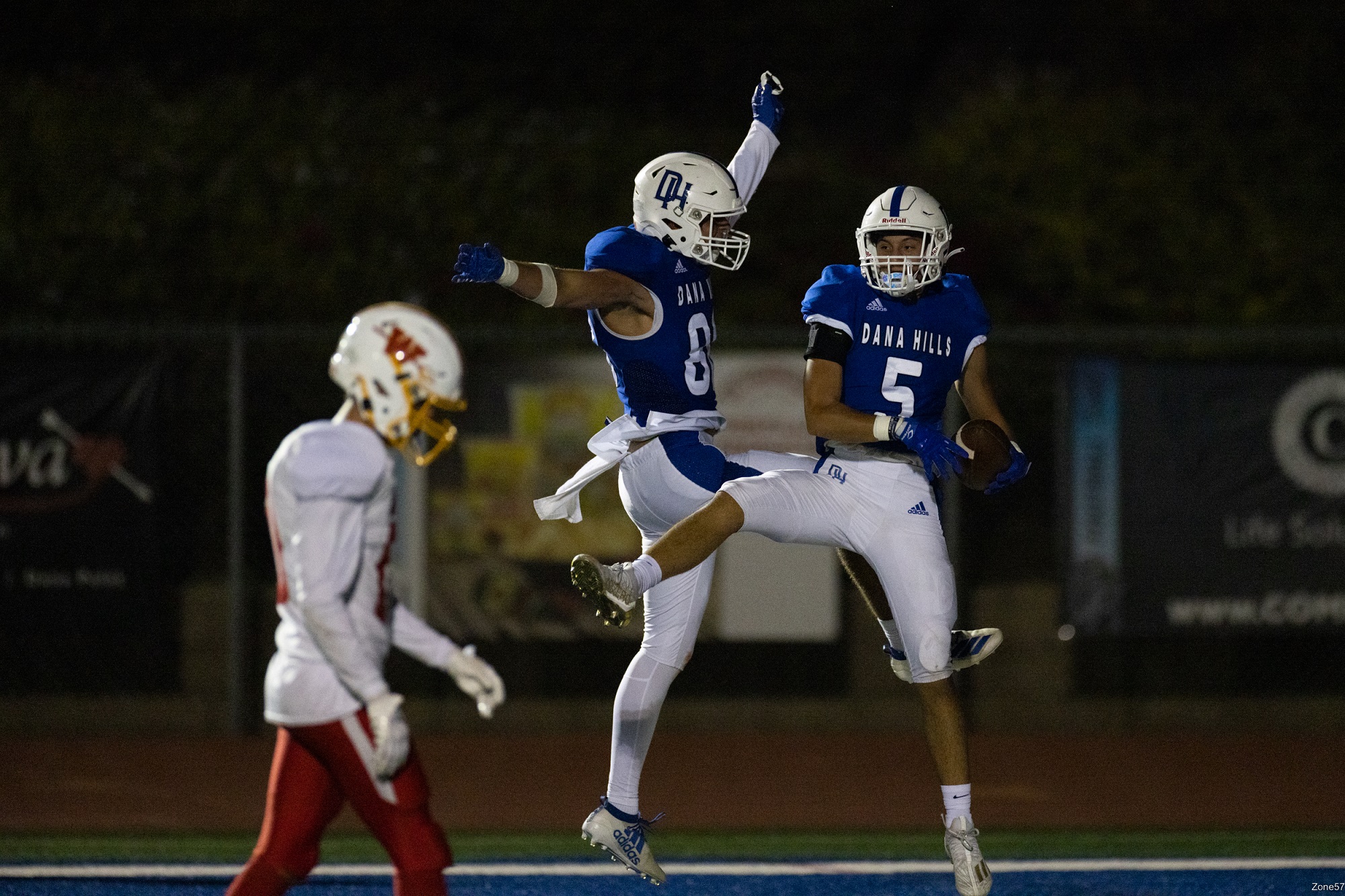 Vernon, a senior,  connected with San Juan Hills transfer Chase Berry for three of those scores, on the way to completing 11 of 16 attempts for 174 yards on the night in addition to a late interception.

Dana Hills head coach Tony Henney said it was nice to unleash the “explosive weapon” in Berry Friday, and complimented Vernon on making some beautiful throws on those touchdown plays.

Vernon also had high praise for his teammate.

“That kid’s fast, such a great player and fun to play with; (he) makes me a better player,” the quarterback said. “I love that kid.”

Berry totaled 95 yards and three touchdowns on just three receptions, and Guarascio led all rushers with 201 yards on 19 carries.

Dana Hills (3-1) will travel to Rialto for its next nonleague game against Eisenhower Friday, Sept. 23.

After Woodbridge (3-2) took a 14-10 lead on the first play of the second quarter, the Dolphins’ offense kicked into high gear, scoring 21 unanswered to close the first half.

Vernon completed 18- and 17-yard passes to move Dana Hills into scoring territory before senior Blaize Bolter took a reverse 16 yards for a score. The extra point was missed for a 16-14 Dana Hills lead.

The Dolphins forced a 3-and-out on the next drive, and the Woodbridge long snapper launched the ball over the punter’s head for a safety, giving Dana Hills an 18-14 lead with 5:20 remaining in the second quarter.

Dana Hills capitalized on having good field position, and Guarascio took a short pass and weaved through defenders for a 16-yard score.

Following a blocked punt by senior DL Adam Sudam, Vernon lofted the ball into the back corner of the end zone to Berry for their second touchdown of the night. Dana Hills took a 31-14 lead into the half.

Henney said getting the quick stops and safety was huge for the team going into the locker room.

“You’re always worried about—if the other team is getting the ball to start the next half—if they get the last score, you get a 10- to 14-point swing (if they score to open the second half),” he said of the moment’s importance.

However, Woodbridge opened the third quarter with a 15-play, 80-yard drive that chewed 9:48 off the clock and ended with a 9-yard touchdown run by Edward Ma.

Vernon and Berry responded again, this time for a 64-yard beauty that led Berry into the end zone all alone.

The Warriors closed the scoring by punching the ball in with a 4-yard run by Tatum Ramos after Dana Hills mishandled a handoff for the 38-26 final.

Friday’s performance marked Guarascio’s fourth-straight 200-yard game, as he has rushed for 954 yards on 97 touches this season – good for 9.8 yards per carry. He also added four receptions for 48 yards and a touchdown.

On the first play from scrimmage, Guarascio ran for 65 yards down the sideline to get Dana Hills into the red zone. The Dolphins stalled out, and Deacon Hill made a 25-yard field goal to put Dana Hills on the board first.

Woodbridge’s Daniel Goodrich took the ensuing kickoff 79 yards to the Dana Hills 1-yard-line, and Feiamma Armstrong scored on the next play.

A 31-yard burst from Guarascio again put Dana Hills in scoring position, and Vernon found Berry for a 11-yard touchdown to give the Dolphins a 10-7 lead.

Woodbridge came right back with a nearly eight-minute drive that ended with Ma scrambling and finding DJ Moore for a 5-yard score.