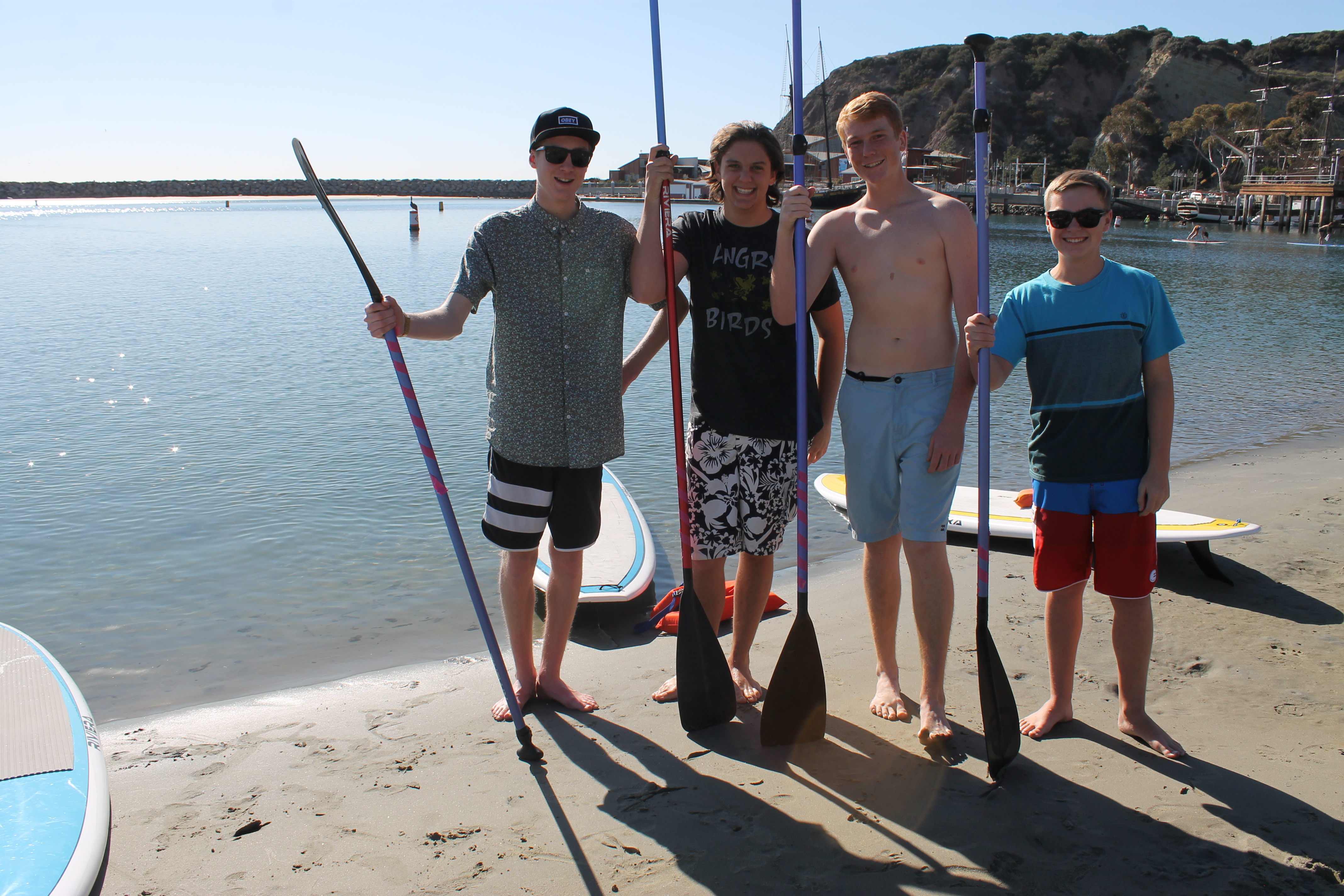 Dana Hills SUP Class is One of a Kind

The popularity of stand-up paddle boarding has grown exponentially in Dana Point over the past few years. Dozens of SUP riders, young and old, gliding in and out of the harbor at all hours of the day have become a regular sight.

Retailers have taken notice, as more boards, paddles and equipment line the shelves of local surf shops to meet growing demands. Even the hard core enthusiasts of the sport, and professionals, flock to Doheny State Beach once a year to take part in the gigantic Rainbow Sandals Gerry Lopez Battle of the Paddle, which celebrated its sixth installment in September.

Rick Stinson, a teacher at Dana Hills High School and avid paddleboard rider, witnessed the boom firsthand.  When discussing with friends and colleagues how they can grow the sport even further, the conversation naturally turned to the classroom.

After navigating the proper channels and receiving full support of the administration, Stinson created a stand-up paddleboard class, which is now offered at Dana Hills.

“This makes sense. We’re right here, where the industry is huge. There’s the biggest paddle race of the year here … and it just seemed like a natural fit,” Stinson said.

Stinson said that in his research for writing the class curriculum, he could not find any specific precedent to follow. He knew of the off-campus skateboarding class offered at San Clemente High School and the bowling class offered at Capistrano Valley, but as far as Stinson could tell, the SUP class at Dana Hills would be the first of its kind anywhere in the country.

Operating as a physical education class, the SUP class meets at Baby Beach in the Dana Point Harbor two times a week during block periods. Because the class takes place off campus, it is limited to students who can provide their own means of transportation.

Due to budget restraints, the class has had to rely on donations from local businesses and clubs to get out on the water.

Space on the beach was donated by the Dana Outrigger Canoe Club. Paddles and 10 boards were donated by Riviera Paddlesurf in San Clemente. A handful of students with prior paddling experience bring their own boards to class.

One of those students is junior Avery Burke, who had over one year of SUP experience before she signed up for the course. Burke said that the 35 students who were admitted to the class know that they are in a unique position where they get to learn and have fun at the same time.

“I thought it was really cool and I was interested (in the class). I have a paddleboard of my own so I was willing to see what I could learn and further my experience with it,” Burke said. “It’s nice. We get to come here, and we’re not in a classroom, we can be on the beach. It’s the coolest P.E. class that we have.”

Before taking the class, Burke could only paddle to parts of the harbor, but now due to the added reps and practice offered by the class, she can navigate her way around the entire area.

When the class first started, Stinson saw a wide range of skill and experience levels amongst the students. Some, like Burke, knew what they were doing while others had never been on a board in their life. That made the stressing of fundamentals a priority during the first week of class.

Students were taken on a walk around the harbor as Stinson pointed out potential hazards, like rocks and docking areas. They were also taught to read the wind, an influencing factor that can take a bad situation and make it worse. Basic paddling technique was taught.

Now the students who couldn’t make it past the first buoy off of Baby Beach without falling down at the start of the semester can glide past it with ease.

Stinson said that the demand for the class is high, which is a good sign of things to come.

“The students are always looking for something fun. This is a sport where it’s a lifelong thing that you can learn and play forever,” Stinson said. “This is another way to get them out of the house and on the water and expose them to something new that maybe they’ve never done before.”