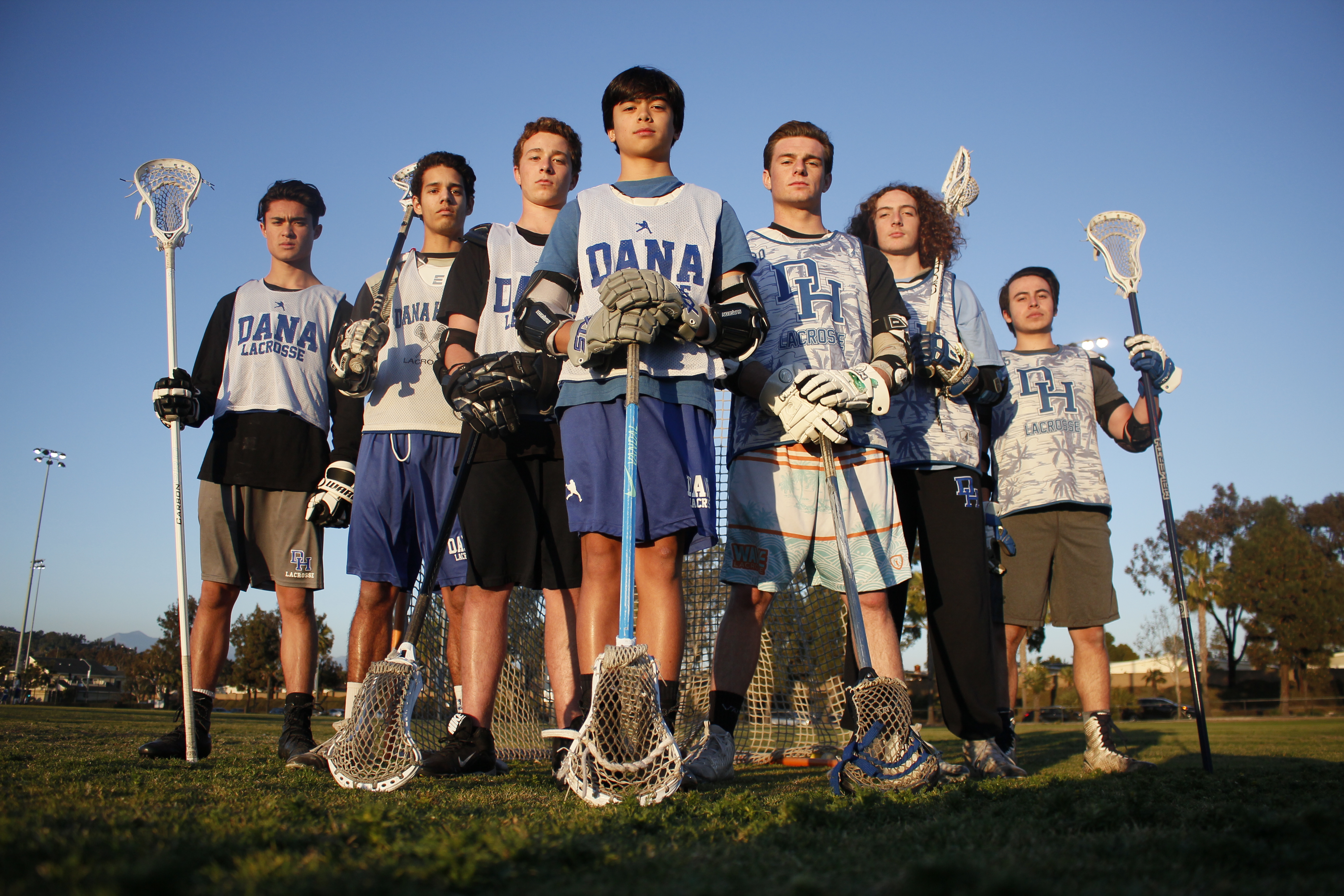 The spring preps season is underway at Dana Hills High School. In our annual preview, we feature all of the Dolphin programs that will be in action this season.

The Dana Hills baseball team knew it was going to take a hit to its pitching staff after Hans Crouse was selected in the second round of last year’s MLB draft and graduated. But Dolphins coach Tom Faris couldn’t have imagined the hit to his group of pitchers coming into the season.

By injury, Tommy John had to go into surgery and with a couple players leaving the team, Dana Hills lost five of its top six pitchers going into the 2018 season. But those who have stayed have come in and encouraged Faris about their prospects.

“These kids that are with us now have done a good job,” Faris said. “They’re stepping up and pitching well. It’s not overpowering, so they’re going to have to work backwards, hit their spots and play some pretty good defense behind them.”

Luckily, Dana Hills has some returning experience in the field like senior Corey Cisowski at third base and junior Zach Waters at shortstop. Junior Logan Gallina steps into the starting catcher role after being the backup a year ago.

There is also a strong youth contingent with a dab of experience as well with sophomore left-fielder Thomas Buckanavage and sophomore pitcher Dante Jackson.

Faris said that they want the pitching staff sorted out by the start of league and are giving plenty of players looks on the mound. He’s also confident in his group.

“This team is going to be successful because of the way they work,” Faris said. “The character of these kids is great. I’m really excited about this year. I’ve never had more of a fun year coaching so far.”

The Dana Hills boys golf team is being led by youth into the 2018 season.

Sophomores Dylan Walsh and Gavin Whitehead are two of the early leaders for the Dolphins in first and third in the team’s nine-hole index. Junior Quentin Hill is second on the team and will be counted on after a strong sophomore campaign. Hill was the low man in the Dolphins CIF-SS performance.

The Dolphins open defense of their league title against Mission Viejo on Tuesday, March 20 with league finals the week of April 30.

The Dolphins are also seeing change after coach Matt Rosa resigned last season after 14 seasons at Dana Hills. Carrie Pierce, the girls water polo coach in the winter season, steps in this season to take charge of the 2017 CIF-SS champion and 2016 runner-ups.

“We still maintain a couple of our guys that scored big points at CIF and definitely scored at league,” Pierce said. “Now we’re looking to create a new group that is just as successful as last year was. They really set the tone and the standard going forward in winning at the highest level and having that experience.”

Rosa’s are big shoes to fill, no doubt, but Pierce has taken comfortably to the position.

“I know a lot of these guys just because I’ve been coaching here for six years and I went here,” Pierce, a Dana Hills alum, said. “I know a lot of them, trained with some of their older siblings. I know this group already. It’s been fun.”

University of Southern California signee Owen Kao and University of California-Santa Barbara signee Zach Shenkin return to hold down the middle-distance races and will be key parts of the Dana Hills relay teams.

The Dana Hills girls swim and dive team was led by its youth last season, and that youth has grown into an experienced core.

Junior Devon Forker will be all around the pool in the 100-meter butterfly, 200-meter individual medley and relay teams. Senior Courtney Prefontaine will take on the 100-meter backstroke and relays, and senior Madeline Wiese will lead the Dolphins in the sprints.

Sophomores Anna Nemeth and Sydney Querner will also be key for Dana Hills.

Dana Hills will be the home team for the majority of its league meets beginning on Tuesday, March 13 against Laguna Hills. League Finals are on May 4.

The Dolphins boys tennis will have work to do this season, but Dana Hills has a balanced group that will focus on its play in league.

“This season, we’ve got a good mix of players,” Dana Hills coach Mike McCall said. “Some old guys from last year’s team and some guys that came up from JV. We’re playing strong preseason teams, very tough competitors for these guys, hopefully to get them ready to have a good league season.”

Juniors Riley McCall and Taylor Stephens will be counted on to come up big in singles play. The Dolphins’ No. 1 doubles team of senior Ryan Burns and junior Bill Hoffman will be strong competitors in league.

Dana Hills picked up its first win of the season on March 6 over Mater Dei, 13-5. The Dolphins open league play at Tesoro on March 15.

The Dana Hills boys track and field team was on the younger side last year but still had a strong run to a fourth-place finish in CIF-SS Division 1.

The Dolphins are as balanced as ever and look to make a big push in 2018.

“In the past, we’d always have distance and kind of throw some sprints in there,” Dana Hills coach Keith Chambers said. “Now we have sprints and we have distance. The outlook looks pretty good as far as our sprints. Of course, we always have our distance that did pretty well in cross country season.”

This year’s 1,600-meter relay team will be made up of seniors Halvax, Josh Dowdy and Brandon Oswald and junior Nathan Fatigate.

Jack Landgraf is now the senior leader of the distance group for Dana Hills, the Dolphins’ bread and butter. In 2017, Landgraf was the county champion in the 1,600 and 3,200 meters as well as the CIF-SS Division 1 champion in the 3,200-meter.

Senior Max McKhann adds another element for Dana Hills in the field events. In discus, McKhann was second at league, third at CIF-SS Division 1 and qualified for Masters.

The Dana Hills girls track and field team has plenty of youth and plenty of talent to keep the Dolphins contending again for the league title.

The spotlight will be on Dana Hills’ county record-holding 1,600-meter relay team. The Dolphins set broke the county record at the CIF-SS Division 1 finals last season and broke it again at State.

The relay group is led by junior Hailey Ray. Ray was also the league champion in the 100-meter and 300-meter hurdles as a sophomore. She steps in to lead after Jennifer Daly graduated.

“She has taken on a leadership role,” Dana Hills sprints coach Keith Chambers said. “It’s not so much a learning curve. She’s done a great job with it. She holds the girls accountable, and she was one of those that needed to be held accountable last year. I teach them to learn from their experiences.”

Junior Ximena Bustos will be part of the relay and run on her own in the 400-meter. Sophomore Anisa Rind contributed on the relay as a freshman and will also run the 800-meter race.

In the distance races, Dana Hills is again powered by its cross country team. The Dolphins are led by juniors Leila Keyvan and Sarah Meng as well as a stable of sophomores like Marisa Gaitan and Anna Fodor.

In the field events, thrower Maddy Mitchell returns as a junior after a sophomore campaign that saw a discus league title and second place in league shotput.

Dana Hills has a balanced group that will contend as it matures.

“It’s a young team, but it’s the best crew I’ve seen come through here in my five years at Dana Hills,” Iltis said. “The most experience group we’ve had for how young they are. We’re coming from cultivating our youth club team. A lot of these kids I’ve coached since sixth or seventh grade.”

The Dolphins will be led by a strong attacking unit up front including last year’s leading scorer, Tommy Ferry. Ferry is also a hockey player for the district Capistrano United team in the Anaheim Ducks high school league.

“We have a stronger attack unit than in years past,” Iltis said. “They have a strong lacrosse IQ. We have that tactical advantage of guys that know where to be and how to execute.”

Sam Martin is the offensive captain for Dana Hills. The Dolphins also have strong freshman contributors in Dylan Iltis and Ryan Allain.

Senior Grant Shobar is the senior team captain and holds down a strong defensive unit.

The Dolphins are also hosting four “Friday Night Face-Off” games this season. Dana Hills beat San Juan Hills in the first of the four games on March 2. The Dolphins host Norco on March 9, University on March 16 and Crean Lutheran on April 20.

The Dana Hills girls lacrosse program is still trying to find its footing.

Dana Hills alum and former player Alejandra Moraga returns for her second season with the Dolphins. She will look to cultivate more success with a group coming off of a 2-13 season last year.

Dana Hills has already matched its win total from a year ago with victories over Murrieta Valley, 15-10 on March 1, and Valencia, 16-5 on March 5.

The Dolphins open league play at Capistrano Valley on March 27 and face one of the two teams they scored wins against last season at El Toro on March 29.

The Dolphins blazed through an undefeated league campaign to capture the league title and marched to the semifinals of the CIF-SS Division 2 playoffs. Dana Hills fell to Riverside Poly.

Luckily for the Dolphins, their main offensive contributors a year ago were all juniors and return for another run.

Seniors Jessie Nagel, Tori Sickmeier, Cozette Zoch and Cameron Cecil lead Dana Hills early in the season on offense. Nagel has four RBIs through four games, and Sickmeier and Zoch each have a home run.

Junior Terra Goetz and freshman Maddie Wood have stepped into the circle to lead the Dana Hills pitchers. Each has a win so far for the Dolphins.

The Dana Hills boys volleyball thing is something that only comes with time: experience.

The Dolphins have plenty of youth with three sophomores in their starting line-up.

“It’s a very inexperienced team,” Dana Hills coach Oz Simmons said. “You can see that from our roster. It’s people that haven’t played together. It’s about getting them comfortable and getting players that aren’t used to this level used to this level.”

Simmons said there isn’t much he can do there to mimic a CIF game or give the kids more years under their belt, but the team is building chemistry and looks forward to the league season.

“I think it’s going to be a crazy, even league,” Simmons said. “Every team is very, very equal. I would absolutely surprised if someone went 8-0 in league. It’s going to be tough to do.”

Senior Trevor Weinert is the most experienced for the Dolphins as a three-year starter at middle blocker.