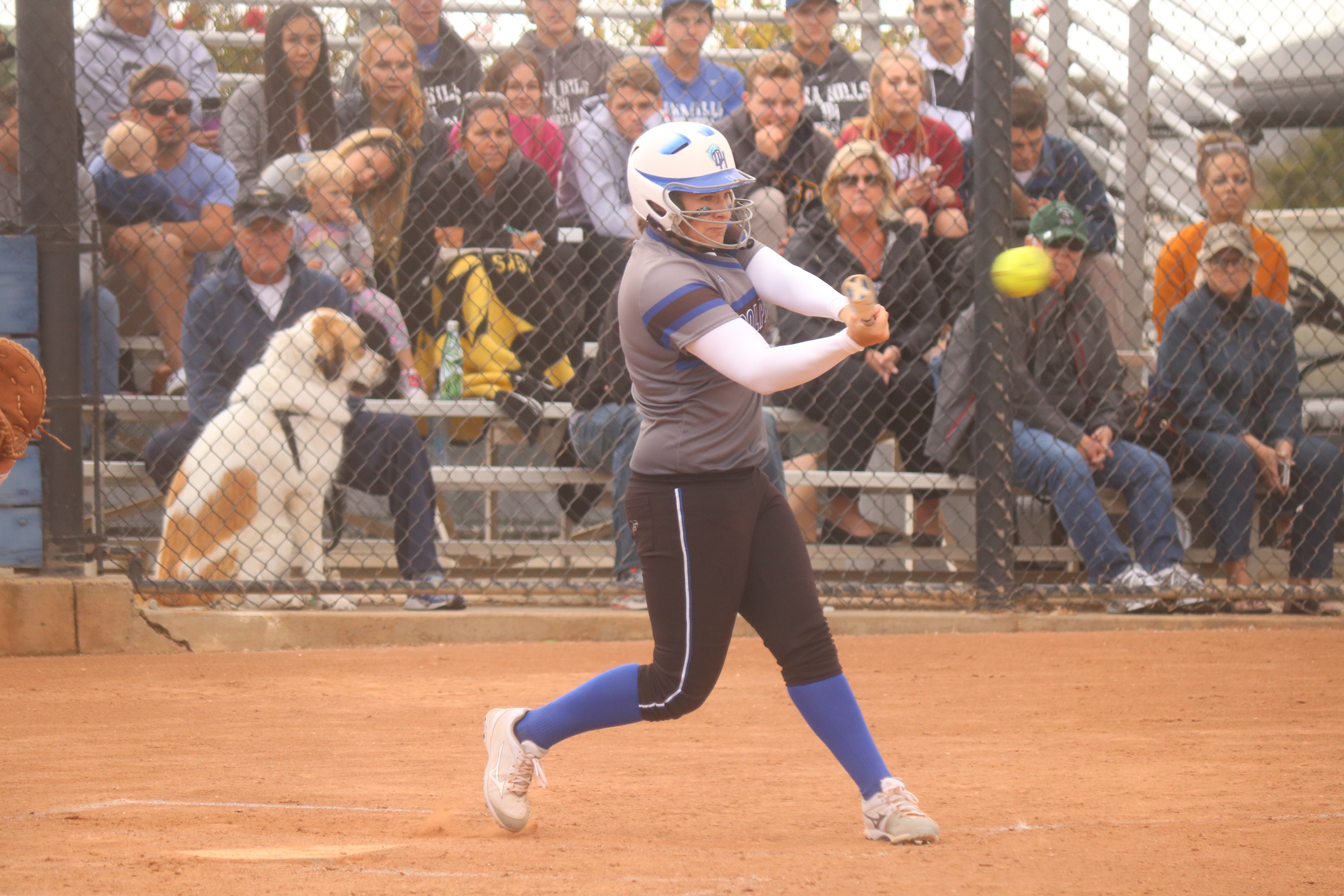 DANA POINT – Never underestimate the will of a champion.

As defending Sea View League softball champion Dana Hills welcomed in league-leading San Juan Hills for a rematch, the Dolphins were determined to let it be known that nothing had been decided despite a loss in the first match-up.

“That’s us,” Dana Hills coach Brandon Cosenza said of his message to his team as he pointed to the Dolphins’ 2017 league championship banner. “That sign is us. Until they (San Juan Hills) do something about it, we are the champions of this league. Be confident, come out, play hard and things will take care of themselves.”

Dana Hills came out strong with a first-inning, two-run home run by senior Mia Onesto and rode its offense to a win over San Juan Hills, 8-4, in a league game on Tuesday at Dana Hills High School.

The result forced a tie atop the league standings between Dana Hills (12-9, 5-1) and San Juan Hills (16-10, 5-1) with two games to play. If both teams win out, they would be crowned co-champions after splitting the season series.

Dana Hills’ Mia Onesto talks about the Dolphins’ 8-4 win over San Juan Hills to force a tie atop the Sea View League softball standings. Onesto hit 3 for 4 with a triple and a home run. @Dolphinsoftball @dhhsadmin @onestomia pic.twitter.com/PDFb6ejDBH

“I think both teams are going to be a tough game,” San Juan Hills coach Heather Hamilton said of their final two games at Tesoro on Thursday, May 3 and against Trabuco Hills on Tuesday, May 8. “It’s more of us keeping our heads in what the goal is and finishing strong, going in strong, keeping our tempo the same.”

Dana Hills finishes at El Toro on Thursday, May 3 and against Tesoro on Tuesday, May 8.

San Juan Hills, in the midst of its best league season in program history, took the first match-up between the two on April 12, 4-2, at San Juan Hills, but the Dolphins held serve at home on Tuesday with a strong first inning.

Senior Tori Sickmeier tripled home senior Cameron Cecil, and Onesto hit a ball in the gap that scored Sickmeier and herself on an inside-the-park home run.

“That was nice,” Cosenza said of the start. “We had a little hiccup earlier in the year, but we knew if we came out, we hit the ball well and we played better defense this time that we’d be okay.”

San Juan Hills came back in the third inning.

Junior Angelica Gonzalez led off with a double and immediately scored on a double by senior Gracyn Houmis. A single by senior Lauren Fairchild sent Houmis racing home to score and cut the deficit to one run, 3-2.

Dana Hills scratched together a couple hits in the bottom of the third, but San Juan Hills looked to get out of the inning before a tight call on a high throw at first base.

Dana Hills sophomore Jackie Stillwell was initially called out before the Dolphins coaches prompted the umpires to talk it over. Deciding the Stallions first baseman came off the bag to make the catch, the umpires reversed the decision, and junior Terra Goetz took advantage of the extra out with a bases-loaded RBI single to score Sickmeier.

Dana Hills added two more in the fourth inning with a two-out triple by Jessie Nagel, a singly by Sickmeier to score Nagel and a triple by Onesto to score Sickmeier.

San Juan Hills got one back in the fifth as Houmis scored on a fielder’s choice, but Dana Hills pushed out again in the sixth inning.

Cecil doubled and scored on a Sickmeier single, and Sickmeier eventually scored on a San Juan Hills error as the catcher missed the pitcher on a throw back to the circle.

“We were in it 100 percent,” Hamilton said. “If we could’ve gotten that call at first, and we didn’t have that missed throw to the pitcher, that’s two runs we could have saved. We fought 100 percent through this game. Both teams did.”

San Juan Hills scored one in its last-chance seventh inning as Gonzalez led off with a single and scored on a single by senior Bree Johnson, but the Stallions left two on base with the final out.