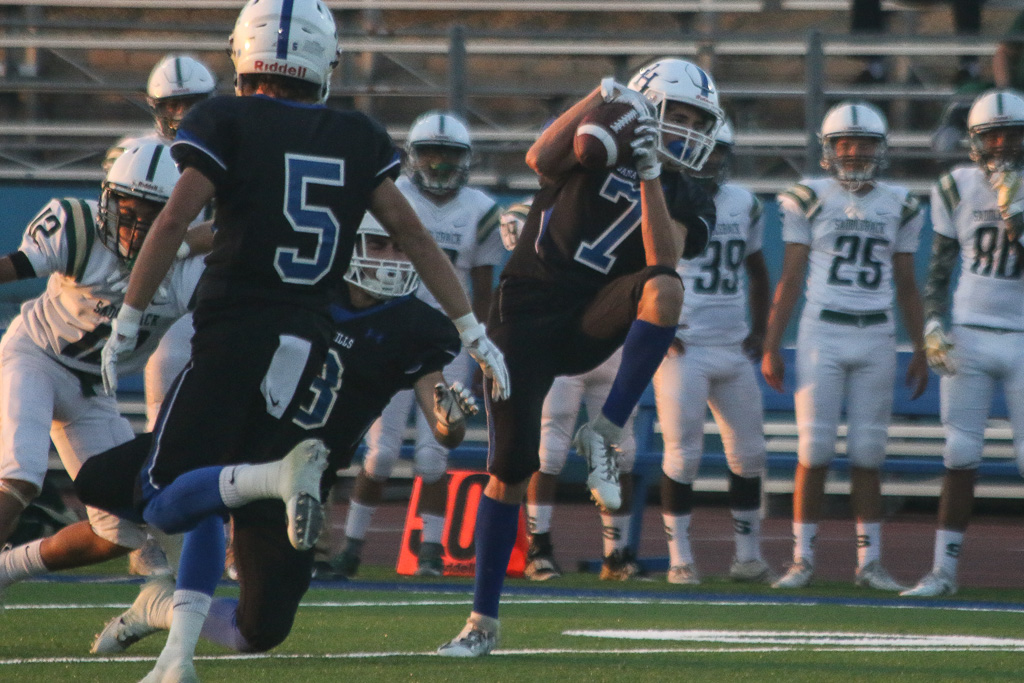 DANA POINT – It’s not an accomplishment that you raise a banner or hand out rings for, but the Dana Hills football team made a mark in its march toward improvement on Friday night.

The Dolphins smothered Saddleback on defense and got three touchdowns in three different ways from Trevor Gartlan to defeat the Roadrunners, 41-0, in a nonleague game at Dana Hills High School.

Gartlan, a junior, scored a 26-yard rushing touchdown in the first quarter, returned the opening kick-off of the second half for a touchdown and scooped up a fumble recovery for a touchdown to push the Dolphins further and further away from Saddleback (0-3).

Dana Hills held Saddleback to just 17 yards of offense in the first quarter and 64 yards in the first half to earn their first shutout victory since Oct. 13, 2017, 10-0 over Laguna Hills. Saddleback has been outscored 146-0 in its first three games.

“We really worked hard as a team and worked hard all week to make sure and put our best into this,” junior defensive end Liam Boersma said. “A lot of dedication and hard work. We’re putting in the hours and I’m glad we’re succeeding.”

Dana Hills’ Liam Boersma blocked two punts and scored on one of them in the Dolphins’ 41-0 win over Saddleback @dhhs_athletics @dana_football @DanaPointTimes pic.twitter.com/fjlIkTqvWo

Boersma blocked two punts and took one into the end zone for a touchdown. Boersma has blocked five kicks this season.

“I don’t even know how many crazy special teams plays he’s made. He’s batted down passes, picked one off, sacks, blocked punts. That kid is making plays all over.”

Dana Hills’ defense got right into the action as Brett Haynes intercepted Saddleback on the first play of the game.

Dana Hills was denied a scoring opportunity on an interception of their own on a shot to the endzone.

After a Saddleback three-and-out, the Dolphins took over at the Saddleback 38-yard line. Saavedra took a low snap, burst forward and left down the sideline for a 32-yard run and the game’s opening score, 6-0.

On the first play of the Dolphins’ fourth drive, Gartlan took a sweep to the right and up the sideline on a 26-yard touchdown run. Saavedra completed the two-point conversion for the 14-point lead.

Saddleback finally got something going on the ground in the second quarter, and the Roadrunners threatened to score their first points of the season.

Dana Hills didn’t let that happen. Sam Shultz took down the Saddleback quarterback on a third-down, cut-back scramble at the Dolphins’ five-yard line, and Adrian Sword pulled in a sack on fourth down to stop the Roadrunners cold.

Max Burlison grabbed an interception for Dana Hills to end the half.

In the third quarter, Gartlan returned the opening kick-off for a score, Boersma collected his punt block touchdown and Gartlan followed with his fumble recovery touchdown for a 35-0 lead.

Matthew Lua Mu Poching scored on a four-yard run just before the end of the quarter for the 41-0 final score.