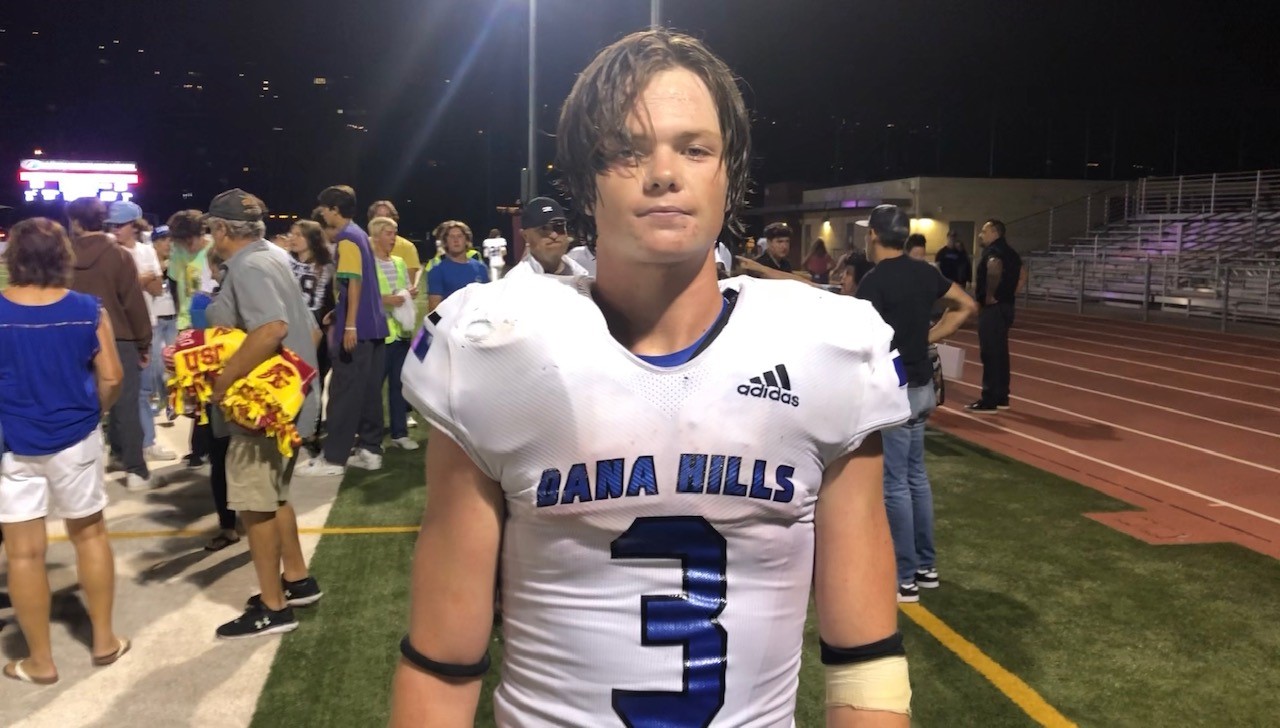 LAGUNA BEACH – Every bit of Friday’s game could be described as a “battle” for the Dana Hills football team.

Senior Blaize Bolter blocked a Laguna Beach punt with just under two minutes to play, and senior running back Christian Guarascio powered into the end zone for this third touchdown run and 269 rushing yards, as Dana Hills took a wild road game, 28-24, on Friday, Aug. 26, at Laguna Beach High School.

“I feel like this game really showed that we can battle through four quarters,” Guarascio said. “We’re not going to be that team that we’ve always been, where we play one half and then lose it. This team can come here and compete for four quarters.”

Dana Hills (2-0) has a bye week before hosting rival Aliso Niguel on Sept. 9.

Following a 23-yard field goal that put Laguna Beach (0-2) ahead by three points with under seven minutes left, the Dolphins strung together a big drive, that included two third-down conversions and one fourth-down conversion on the arm of senior quarterback Connor Vernon. Vernon connected with junior Nate Depierro on a 13-yard pass on fourth down from the Dana Hills 31-yard line and hit Bolter for gains of 7 and 21 yards on third down.

The second conversion to Bolter put Dana Hills in the red zone with an eye on the lead, but Laguna Beach forced a fumble on a Guarascio run and recovered at the 22-yard line.

“I didn’t have any doubt that our team was going to keep fighting,” Guarascio said. “I think I was a little disappointed in myself, for sure, a little frustrated, but I couldn’t let myself hold my head down. I had to keep my head up and had to keep fighting, not even for me, but for the team.”

Dana Hills then jumped offside to put Laguna Beach at first-and-five, but the Dolphins’ defense held up. Dana Hills pushed back the Breakers on negative-5-yard run and stopped a short pass on third down to force a Laguna Beach punt.

It was then that Bolter screamed through and got his hand on the ball to block the punt and set Dana Hills up on the Laguna Beach 13-yard line.

Bolter also caught six passes for 79 yards and a touchdown in the game, after putting up 131 yards receiving in last week’s win over University.

“He’s just been awesome all summer,” Dana Hills coach Tony Henney said. “I’ve only seen this a few times in my career. When we voted for captains, he got every vote. Every ballot had Blaize Bolter on it. He’s just a special kid, works his butt off, as hard as you can work going into your senior year.”

A holding penalty on the Dolphins’ next play sent them back, but Vernon found Bolter again on an 11-yard pass. Guarascio then bowled through three defenders to muscle his way into the end zone on an 11-yard touchdown run that put Dana Hills ahead, 28-24.

Guarascio carried the ball 28 times for 269 yards and three touchdowns and added 40 yards receiving on three catches. This was after Guarascio was Orange County’s leading rusher in the opening weekend with 256 yards and two touchdowns against University.

“Last year, he’s either pass protecting or running a flat so we could throw it to somebody else,” Henny said with a laugh. “I think he came in with a goal of being one of the best backs in Orange County, and so far, he’s proved that he probably is.”

Laguna Beach still made the Dolphins sweat it out at the end, as quarterback Ethan Das found Ryner Swanson for a 50-yard catch-and-run to the Dana Hills 12-yard line with just over 30 seconds remaining.

However, the Dolphins broke up four consecutive passing plays to force the turnover-on-downs and ice their second victory.

It was fortuitous that a special teams play sparked the Dana Hills win, as Laguna Beach ran back the opening kickoff nearly 80 yards for a touchdown.

Laguna Beach took advantage of a short Dana Hills punt to go back ahead with one minute remaining in the first quarter on a 1-yard touchdown run, 14-7.

Dana Hills came back quickly as Guarascio surged for runs of 16, 18 and 16 yards to set up the 30-yard touchdown pass from Vernon to Bolter to tie the game, 14-14, on the first play of the second quarter.

Later in the second quarter, Guarascio busted a 71-yard touchdown run, outflanking Laguna Beach defenders with his speed. Dana Hills took a 21-14 lead into the halftime.

The third quarter was a grind for both teams until Laguna Beach sprung a 60-yard touchdown pass from Das to senior Jackson Rodriguez to tie the game, 21-21.

Laguna Beach then grabbed the lead on a field goal midway through the fourth quarter, before Dana Hills’ dramatics took the game.

Dana Hills now moves into an early bye week ahead of their clash with rival Aliso Niguel, but Henney says the Dolphins welcome the early break.