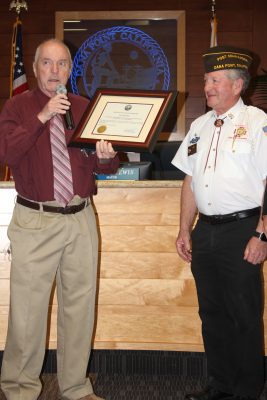 Ray Woods, a teacher at Dana Hills High School, was awarded the State of California Veterans of Foreign Wars (VFW) Teacher of the Year Award at the City Council meeting on Oct.17.

Woods has been a teacher for 47 years and is currently the artistic director of the South Orange County School of the Arts at Dana Hills High School, where he has served as the vocal music and AP Music Theory instructor for 34 years.

“It’s a great honor to be recognized by the VFW on a local, regional and statewide basis,” Woods said. “It means that I’ve been pointing my students in the right direction.”

At City Council, in a room packed with VFW members and Capistrano Unified School District colleagues, Woods was presented with an award from Mayor Debra Lewis and Councilman Richard A. Viczorek from the city.

Durish said that although Woods has just been recognized for his achievements, the deadline for submissions for next year’s Teacher of the Year is just a few weeks away on Oct. 31. Stay tuned to Dana Point VFW Post 9934 updates at http://www.vfwpost9934.org.