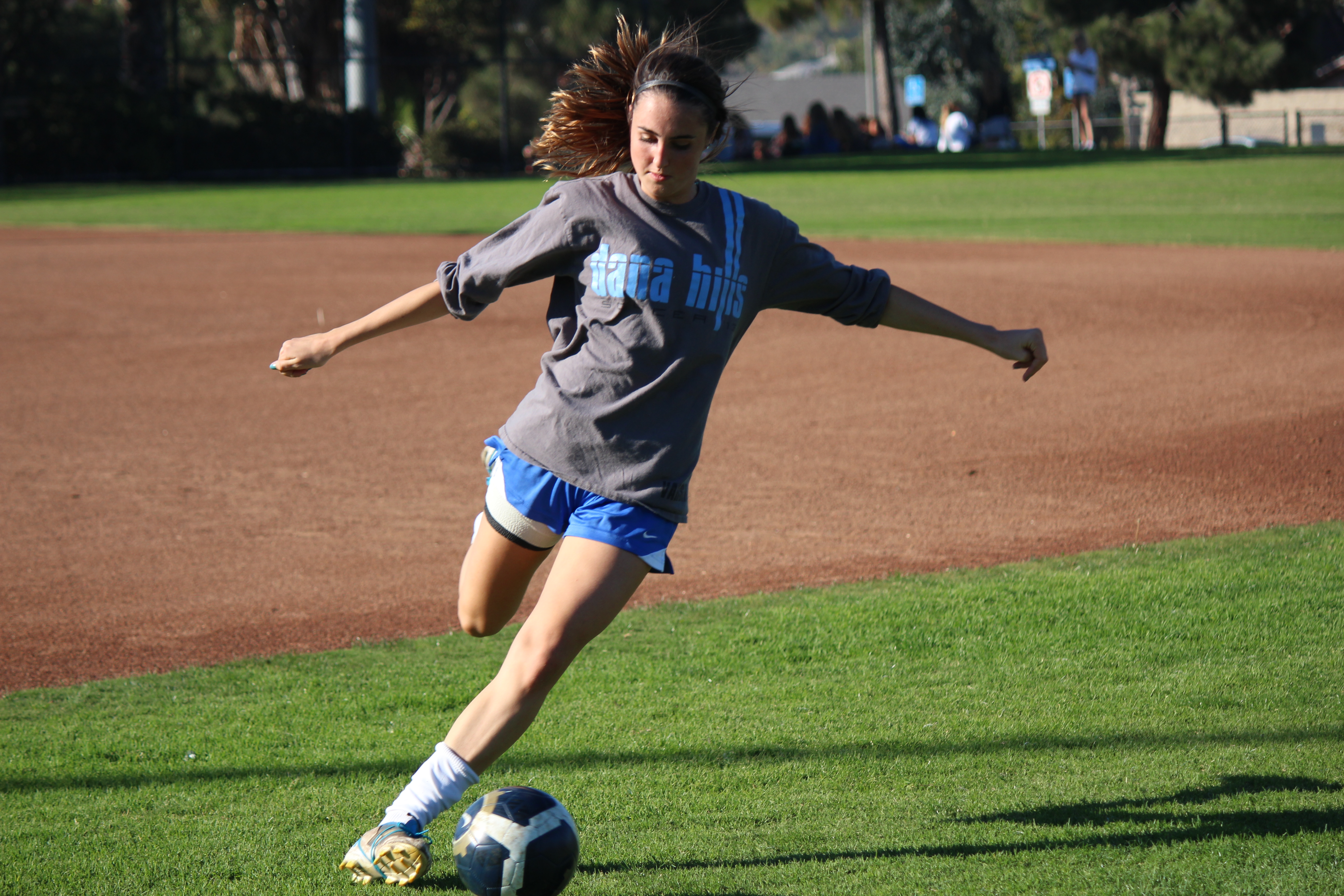 The Dana Hills High School winter season is about to begin. Here is a breakdown of each Dolphins winter sports program along with their season outlook for the coming year. For in-game updates and news regarding all the winter programs, follow us on Twitter @SouthOCsports.

Last Year: The Dolphins captured the South Coast League title and advanced to the second round of the CIF-SS Division 1 Championships, where they lost to Rancho Cucamonga in penalty kicks.

Outlook: The Dolphins will start their quest for a fourth straight South Coast League title under the guidance of first-year head coach Carrie Taylor.

The focal point of the offseason for the Dolphins has been adjusting to Taylor’s new style of play and getting everyone on the same page.

Taylor likes to play a possession-oriented style of offense, coupled with an aggressive, pressing defense, which she feels suits the current Dolphins roster.

The Dolphins back line will be a strength this year and Taylor plans on using veteran players as a catalyst for the offense in the 4-3-3 scheme. Matchett, a four-year varsity player, is versatile enough to play defense and bring the ball up the field to initiate scoring tries.

From the Coach: “If we continue with where we’re going, going far in CIF should be attainable. The mentality of the seniors is strong. If they can keep everyone else in line, we can go pretty far,” Taylor said.

Last Year: The Dolphins tied for second place in the South Coast League and made it to the quarterfinals of the CIF-SS Division 2, where they lost to Santiago-Corona.

Circle ‘em: The preseason schedule is highlighted by games against Laguna Beach (12/3) and Martin Luther King (12/11).

Outlook: The Dolphins are used to starting a season with a little adversity.

Last year they had to adjust to new head coach Chad Beeler and they responded, making it to the CIF-SS quarterfinals. This year, however, they have to deal with a slew of injuries to key players and with their pool deck under construction, Beeler and the Dolphins have had to practice at other local venues in the early going.

Madison Baba, last year’s leading scorer, Maia Borisoff, the team’s main two-meter defender, and Kelcie Pourzanjani are all out with injuries with no immediate timetables set for their returns.

The injuries have set the stage for newcomers to step up and contribute.

Blaire Borisoff has been converted to goalie and Beeler has seen a steady improvement from her at the new position. Freshman Sydney Baba and Samantha McGowan are new faces who have likely worked their way into starting roles.

Molly Wilbur figures to be the focal point of the Dolphins offense.

From the Coach: “With all those players out … we’re almost looking like a brand new team,” Beeler said. “But sometimes when you try and overcome a lot of stuff it makes you better, it makes you stronger.”

Last Year: The Dolphins made it to the semifinals of the CIF-SS Division 1A playoffs and lost by one point in the first round of the CIF State Regional Championships.

Outlook: Coming off one of the most successful runs in recent Dana Hills boys basketball history, the Dolphins are sticking with what worked last season—an aggressive inside out attack.

They lost leading scorer Cory Blau and starting point guard Hayden Fredrick, but they return three of their bigs: James Taylor, Jack Clendenen and Jack Sheffield. All three measure in at above 6 feet 5 inches, with Taylor measuring in at around 6-7.

Head coach Tom Desiano says that Taylor is a notorious “gym rat” and has put in a lot of time over the offseason working on his post moves and footwork. The offense will revolve around his ability to get points in the paint and grab crucial rebounds.

Clendenen possesses a unique set of skills. He is a stretch forward who can also handle the ball well and shoot 3-pointers. Clendenen averaged 9.6 points per game, shooting 35 percent from beyond the arc, and averaged 6.8 rebounds per contest in 2013.

Sophomores Grady Yould and Harry Hall will look to sure up the point guard position.

From the Coach: “We have good size across the board. With that, we know the style we want to play. We’re an inside out team … the players know what our identity is. That’s what we want to do and they feel confident in it,” Desiano said.

Last Year: Dana Hills won a share of the Sea View League title and made it to the second round of the CIF-SS Division 1A Championships, where they lost to Bishop Amat.

Outlook: The Dolphins took a hit due to graduation and have spent the offseason working on meshing together as a new-look team.

Head coach Rob Cullinan described this year’s squad as the most perimeter-based teams he has ever coached, and the Dolphins intend to use a drive-and-kick style offense to score points.

With the roster shake up, sophomore guard Maddy Bloom will again be in charge of leading the Dolphins offense. Bloom had a breakout freshman season that saw her average 10.5 points per contest on 34 percent shooting. Bloom, and returning senior point guard Meg LaRocca, are the team’s designated 3-point shooters.

From the Coach: “The biggest thing we have been working on is playing as a new team, which will take some time,” Cullinan said via email. “We will play hard and mix defenses to be competitive.”

Last Year: The Dolphins finished second in the Sea View League and lost in the first round of the CIF-SS Division 1 Championships to Harvard-Westlake.

Outlook: After losing 10 seniors to graduation the Dana Hills boys soccer team will look to their experienced forwards for guidance and success in the new year.

Junior Paul Romero and senior Jake Allen will be the focal point of the Dolphins offense up top. Head coach Leo Compean said Allen and Romero have been good friends since grade school, and although it might sound cliché, the two know each other’s games very well out on the pitch. Both possess speed and skill that will make them the team’s leading scorers, according to Compean.

Even though they are keeping the same 4-4-2 scheme they used last year, the Dolphins have had to tweak their approach given the roster turnaround. The Dolphins will send multiple midfielders up field to initiate plays with Romero and Allen and will play a hard, pressing style of defense.

The team is using a goalie-platoon consisting of Chris Gomez-Ranfla, Humberto Loya and Jimmy Marquina to figure out who will mind the net.

From the Coach: “We’re going to put as much pressure on every person that we can, until we run out of gas. We’re looking for a high intensity game this year,” Compean said. “And despite our lack of returners, I’m very excited for this year.”

Outlook: The Dolphins lost several impact seniors to graduation and will look to stay afloat in the competitive South Coast League.

Wagstaff, a co-captain, is a wrestler who head coach Reza Abedi pegged as a potential State Championship qualifier. Wagstaff will be among the Dolphins heavyweights this season and could drop down to the 195-pound weight class by league finals.

Wagstaff is joined by fellow co-captains Reyes and Ghomizabeh.

Reyes, a junior, made it to the CIF-SS Individual Championships last year and will wrestle in the 120-pound class.

Ghomizabeh, a senior, was one match away from breaking into the top-6 at CIF. Ghomizabeh was mainly an alternate last season but will play a big role for the Dolphins in 2014, wrestling out of the 132-pound class.

From the Coach: “We are a pretty young team this year. Hopefully when we wrestle at league finals we will get a lot of the kids to qualify (for CIF),” Abedi said.