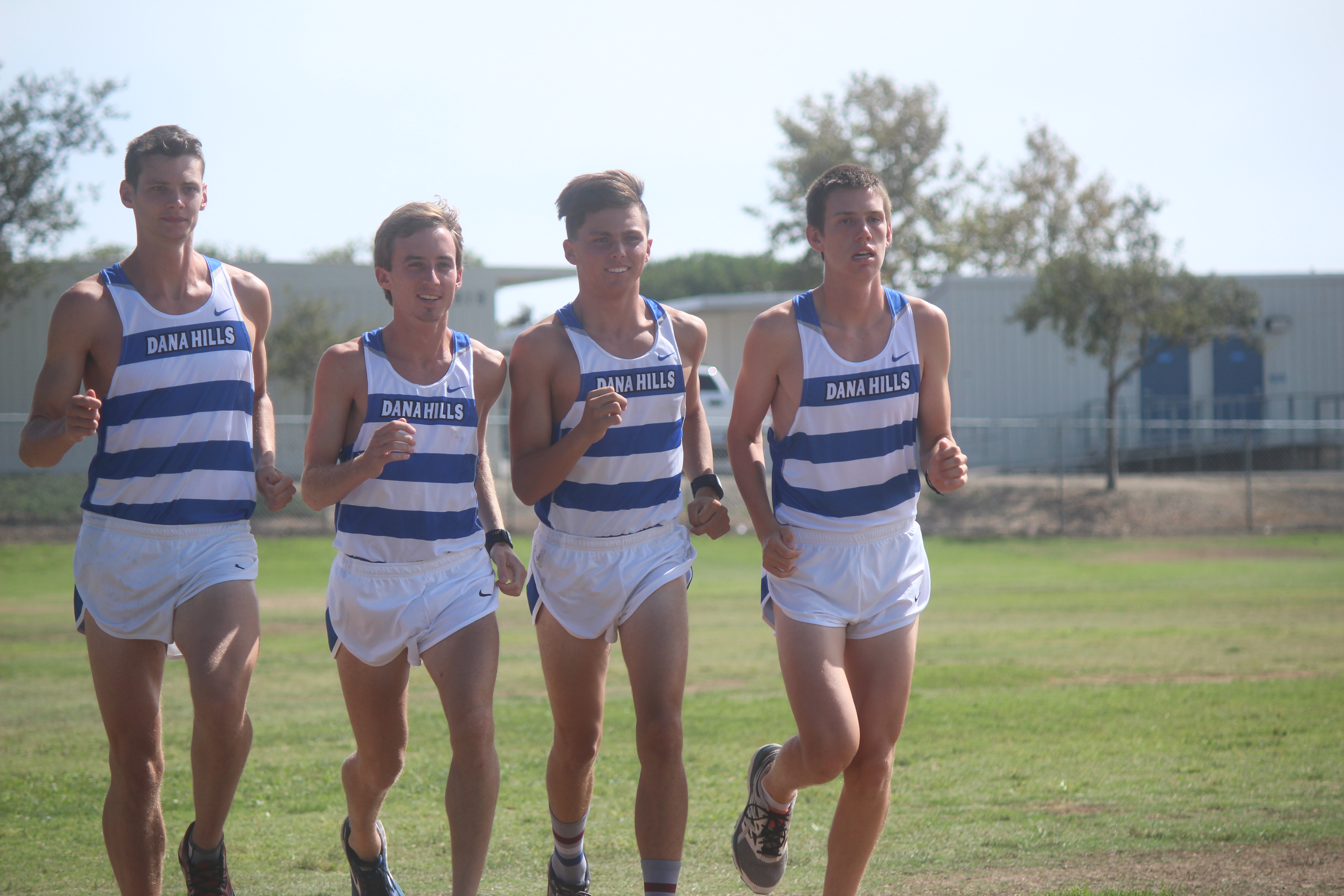 The 2016 fall high school sports season has begun, and several Dana Hills High School teams are primed for big seasons. In our annual preview, we get you caught up to-date on all the Dolphin teams.

For in-game updates, scores, news and more for all of the teams, follow us on Twitter @SouthOCsports.

Normally, when a program loses two of its top athletes and a longtime head coach, one would expect a slight downturn in performance the following season. The Dana Hills boys cross country team finds itself in this very situation as it heads into 2016, but expectations remain as high as ever.

The Dolphins may have lost Mason Coppi and Jake Ogden, two of the most decorated Dolphin athletes in recent years, to graduation and longtime coach Tim Butler to retirement, but a strong group of returning runners have the Dolphins entering the season as the No. 1-ranked team in CIF-SS Division 1.

It speaks to the Dolphins depth, which is always strong year-to-year.

First-year head coach Craig Dunn has been with the team for 17 seasons, and will take the reins in 2016.

Landgraf was the top sophomore in the state last season, and has been leading the way in offseason training. Dunn said Turner, Wilfert and Hough are not far behind. David Fabian, Simon Fuller and Hayden Stein are runners that are vying to fill out the rest of the Dolphins top-7.

Dana Hills first foray into the new season will be in Utah, when they head out to train and compete with American Fork, a perennial nationally-ranked team.—Steve Breazeale

After claiming the South Coast League title in 2015, the Dana Hills girls cross country team faltered as it headed into CIF-SS competition. The Dolphins qualified for prelims, but failed to advance to the next stage.

With a core group of returning runners back in the mix, the Dolphins are determined to return to the top.

Dana Hills entered the season as the No. 5-ranked squad in the CIF-SS Division 1 preseason polls. They are currently ranked sixth.

Head coach Chris Cota is hoping that his top runners can build on their strong spring track and field seasons and parlay that into success in cross country.

Alyssa White, Kathryn Kaloroumakis, Lauren Soto, Sarah Meng and Isabella Austin, who are currently at the top of the Dolphins’ pack, all had solid track and field seasons and have been leading the team in offseason training.

The Dolphins’ depth is solid throughout the roster, and Cota said any number of runners from the sixth spot up to the 13th spot could break into the top group and earn valuable points.

“What we focused on last year was to be pack runners, and that worked really well for us in league finals,” Cota said. “So we’re just going to try and maintain and do the same thing and keep that gap as tight as it can get so we can compete.”

Dana Hills has yet to compete in a meet this season, but will head to Utah with the boys program to train with American Fork later this month.—SB

Dana Hills boys water polo has turned into a powerhouse Division 2 program in recent years thanks to its penchant for counter-attacking opponents and utilizing above-average team speed. The Dolphins leveraged that ability to capture the South Coast League title and advance to the CIF-SS Division 2 championship game in 2015, where they fell to Foothill.

The Dolphins now find themselves in Division 1, but the roster, and approach to the game, remains the same.

Dana Hills lost a handful of impact starters to graduation, including All-CIF-SS players Bennett Williams and Riley Zachary, but return a large group of players with experience that like to push the tempo. The team returns Kai Hanson, Jack McLaughlin, Adam Cole, Kaden Likins and James Daugherty.

“I think we’re more athletic than we were last year from top to bottom,” Rosa said. “We’re pretty versatile. We don’t have the size as some of the other teams in the league, but I think we have the speed, quickness and athleticism to compete.”

One interesting wrinkle to the Dolphins attack this season is the amount of left-handed players they can field. Lefties Hanson, a 44-goal scorer in 2015, and Los Osos transfer Cameron Canizales will provide the Dolphins with firepower from the right side of the pool.

McLaughlin, who scored 76 goals in 32 games last season, will be a major factor on offense as well.

Despite an appearance in the Division 2 title game last season, Dana Hills was not featured in the Division 1 preseason rankings. Rosa accredits the omission to the team’s inability to field its full roster during summer practices. Many of the Dolphins players play for different club teams, which did not allow them to all practice together until the fall. But the Dolphins have hit the ground running in recent weeks, and are poised for another successful season.

“We learned (last season) to really trust coach Rosa and trust our system, because it got us so far. If we do something similar this year, we’d be stoked about it,” McLaughlin said. “I think we’re going to do really well”–SB

The unquestioned leader of the Dana Hills girls golf team this season is Joan Soewondo. Soewondo is a four-year varsity player who has qualified for CIF-SS Individual competition two years running. She narrowly missed the cut to qualify for the CIF State tournament last season by one shot.

Soewondo, who recently committed to the University of San Francisco, is joined at the top of the Dolphins rotation by junior Averee Dovsek, another CIF-SS Individual qualifier from last year’s team. Soewondo’s scoring averaging is currently hovering around even par.

The Dolphins are a young team and feature two sophomores, Isley Grguric and Katie Jacobson, and freshman Lauren Wahlstrom inside the top-6.

As one of three seniors on the team, Soewondo has taken on a leadership role in the offseason. She has embraced helping the younger players with different facets of the game. Soewondo said she has mainly been working with the younger players on situational shot-making and building the their mental toughness.

“We’re all really encouraging with each other and we support each other through the ups and downs,” Soewondo said. “We do that so we stay consistent with our scores.”

After picking up a win over Capistrano Valley and two wins over Mission Viejo to start the season, the Dolphins were defeated by Beckman in back-to-back matches. Dana Hills will open South Coast League play on Sept. 13 against rival San Clemente. The Tritons edged the Dolphins out for the league title last season. –SB

The Dana Hills girls tennis team has been dominant in its first four matches of the season, thanks to a large group of returning players with experience.

So far, the Dolphins have maintained the momentum from their 2015 campaign. Last season, the team split the South Coast League title with San Clemente and advanced to the semifinals of the CIF-SS Team Championships. They had minimal senior turnover in the offseason and return almost their entire lineup in 2016.

Leading the way in singles is Courtney Swift, who has yet to drop a game in four matches. Head coach Justin Green has been mixing and matching his lineups, but Emilia Gorczyca has been a productive singles player in the early going.

The Dolphins’ doubles lineup is full of returning players like Dana Mackensen, who can also play singles, Drae Fresenius and Tatum Phillips.

“We’ve got girls who have been there before and have been in big matches,” Green said. “Our experience will hopefully do well for us this season.”—SB

Although seven out of the 14 Dana Hills girls volleyball players are returning to the court this season, the one component that is not making a return is their head coach from last year.

New head coach Glen Culver is making his debut at Dana Hills after coaching the Mission Viejo High School boys and girls volleyball teams the previous 14 seasons. Culver said he has had a great transition and feels that his 20-year coaching experience will be beneficial for this Division 1 team that heads into the competitive Sea View League.

“This is a talented group of girls and I’m excited to show everyone what we can do,” Culver said.

The Dolphins were moved to the Sea View League after years of playing in the South Coast League. But a disappointing 2015 season that saw them go 9-20 overall resulted in the move.

The Dolphins made an opening statement after defeating arch rival San Clemente in three games for their first win of the season on Aug. 30. The win was big for the Dolphins, who toppled their longtime rival out of the South Coast League.

Headed by senior outside hitter Brenna Dougherty and senior middle blocker Taylor Riedl, the Dolphins have an optimistic outlook on the season and said they have complete trust in their new coach.

Dana Hills has failed to lose a game following the win over San Clemente, and have rattled off wins over Canyon, Fountain Valley and Beckman, respectively. –Victor Carno